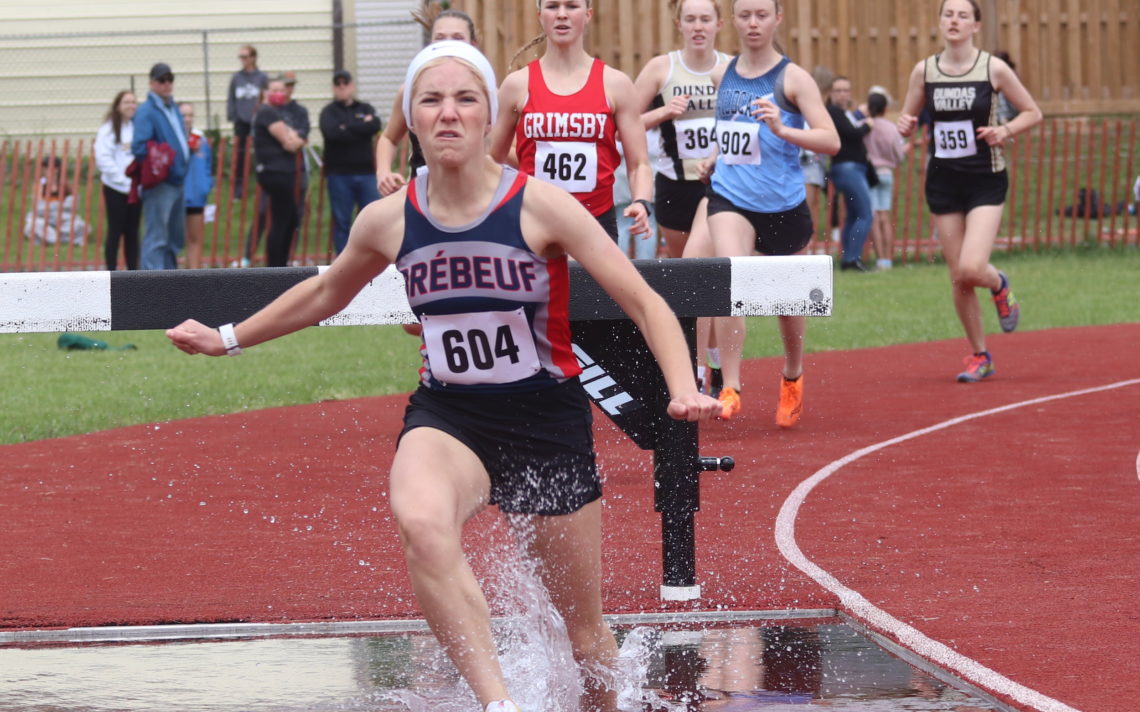 Alexandra Nickel is a quick study.

The Grade 12 student at Saint-Jean-de-Brébeuf at Welland started training for the 2,000-metre open steeplechase a few weeks. After running it for the first time at the Bulldog Invitational, Nickel won the Zone 3 event last week and then added the Southern Ontario Secondary Schools Association championship to her resume Wednesday at Welland Centennial.

“It was a 21-second PB (personal best) for me,” the 18-year-old Welland resident said. “I knew I wanted to beat the SOSSA record today (7:30) which is what I ran at zone and I had a lot of people cheering me on saying, ‘You are on pace. You are on pace.’ I wanted to pick up the pace and go faster and that is what came about.”

Nickel, who was eighth at OFSAA senior girls cross country last fall and 39th at cross country nationals, decided to do steeplechase for a little variety.

“I love cross country and track isn’t something I love as much. So to have the barriers out there is something I really enjoy. It is not an event for the faint of heart but I absolutely love it.”

It has quickly become her favourite track event.

“It is so exciting. You have people around you all the time cheering you on because it is the first race of the day. It is so exciting when you jump in the water and it is a really great environment.”

The Thorold Elite Track Club member’s goal for the event is a top three finish at the Ontario Federation of School Athletic Associations championships.

“My times are looking like I could definitely do that.”

Given that it is her last year of high school provides extra motivation on the track.

“It is unfortunate that I only got a true season this year because in Grade 9 I didn’t focus on it and then COVID hit,” she said. “I want to put down the best times I can before going off to university.”

She is planning to run for the University of Toronto in the fall and study chemical engineering.

Nickel led the 1,500 metres for the first three laps of Wednesday’s face before ending up with a silver medal.

“We didn’t have much of a break between steeplechase and the 1,500 and in the last lap my legs were really starting to bother me,” she said.

“She’s in Grade 12 now and hasn’t run on a track since Grade 9 so that is actually a year even before COVID and so there’s enough of a catch-up or a learning curve just in learning how to run on a distance race, never mind trying to take on a race like steeplechase that is completely new.”

He feels the steeplechase is the perfect event for her.

“She likes the challenge of something that is a little different than just running. It adds a different kind of skill into it and like I said last week you have to be comfortable being uncomfortable. Alex is tough and she is going to dig deep and get it done no matter how bad she is feeling.”

Fife expects Nickel to fare well at steeplechase this spring.

“Alex crushed the SOSSA record, running what is so far the fastest time in the province so the goal is absolutely to be walking away with an OFSAA medal at the end of this season.”

He was impressed with her silver medal in the 1,500 metres.

“She didn’t have the benefit of having fresh legs like the other girls so to still come second and run a 5:00 1500 is quite the accomplishment as well.”