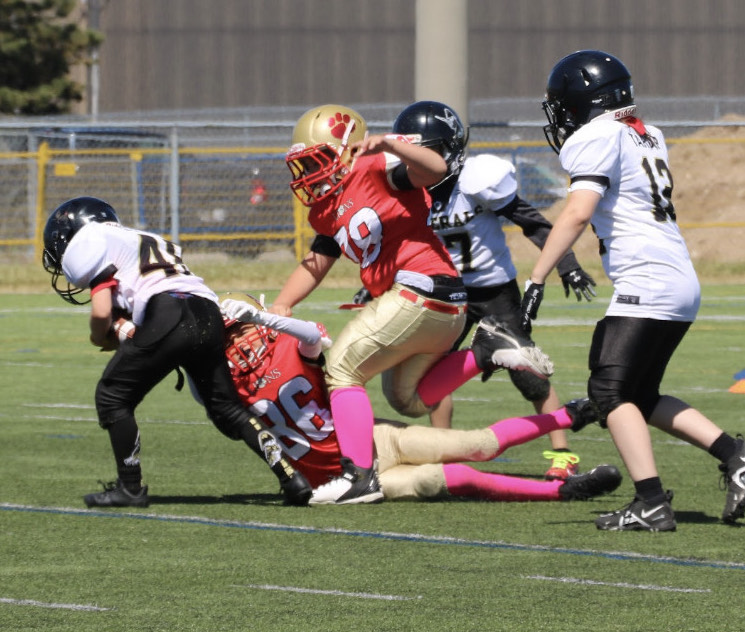 Niagara’s defence had a strong game against the Eagles, not allowing them to move the ball and forcing countless punts.

“Today was a great day for my Niagara Generals,” head coach Bruce Macrae said. “They are pulling together great and our captains our proving to be true leaders. This team is going places and as a coach I can honestly say I could not be prouder to coach such a great group of kids.”

Key contributors for the Generals were: Calum (Sunshine) Smith, who caught two TD passes, including a leaping one-handed grab; Cameron Macrae, Marco Angelini and Lucas Landry with single rushing majors; Aidan Van Mil with a sack-causing fumble that he returned for a major; Luke Harker with a TD grab; Gavin Vasquez who broke tackles all game long and scored a two-point conversion; and, Chase Perry Wentworth who scored a safety.

The Peewee Generals saw a vastly different game tempo compared to their two previous games in their 51-8 victory over the Cambridge Lions.

“The Cambridge Lions prepared well for our meeting this week and their defence held as best they could. This is the first team that has forced a turnover on our offence and it was a bit of an eye opener for our players,” coach Kent Wakem said. “Our offence is used to doing whatever they want on the field. The Lions, with us having a short bench due to vacations, forced us to be a little more strategic in our approach. Our depth players went on the field and made some fantastic plays.”

Wakem credited his offensive line for its play and felt his defence was almost perfect.

Contributing to the victory were: Spencer MacRae with three TDs; Lox Raducanu with two majors; Isaiah Benjamin with a single TD and a single-point convert; Mark Hazzouri with four two-point converts; Aidan Weltz who forced a fumble; Henley Shore who recorded a fumble recovery; and, Isaac Hiebert who had two interceptions, one of which he returned for a touchdown.

“We have a lot of work to do preparing our players for Burlington next week as we will be back up to a full roster again,” Wakem said.

Saturday’s Atom Generals game against the Cambridge Lions was one to forget.

“Our defence had trouble containing the run and passing game which led to four first-half touchdowns,” coach Andrew Lewis said. “Our offence struggled to move the ball down the field. We turned the ball over several times. We had one big run by Jake Brewster in the first half but failed to convert it into a major.”

The Generals had several injuries on offence, losing both of their quarterbacks and one of their tailbacks. Niagara saw some impressive hard-nosed running from its third quarterback Jackson Lewis. He ran for about 80 yards on the ground but unfortunately the team was unable to convert on any of the big runs.

“We can’t stress enough to our guys the importance of containment. This is something we work on every week and we were outplayed in every facet of the game today,” Andrew Lewis said. “The coaching staff had a good meeting with our players after the game. We are putting this one behind us and are looking towards a bounce-back game when we take on Hamilton next week.”