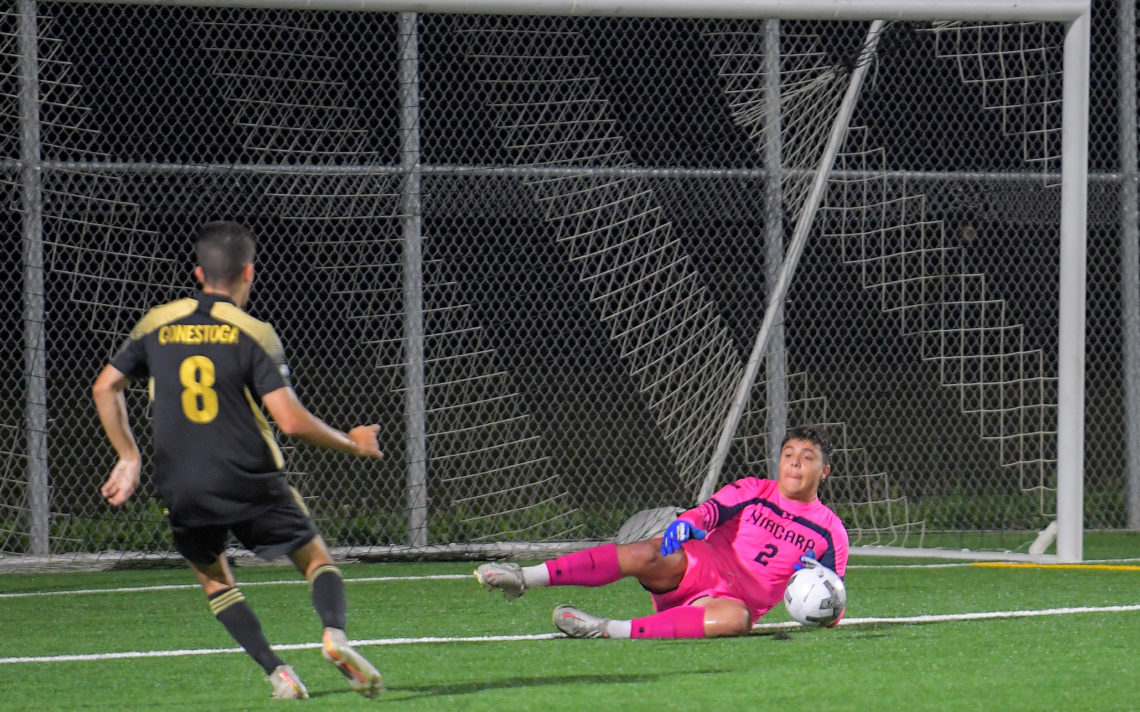 The men dropped a 1-0 decision to the Condors and the women were tripled 3-1 by Conestoga.

Conestoga’s Luca Romano scored the only goal of the men’s game in the 43rd minute off a corner kick.

“That goal against is a textbook coaching moment for defending corners,” Niagara head coach Frank DeChellis said. “We left him open with all the time in the world and the sequence ended with the ball in our net and four of our players frantically trying to do afterwards what one player could have easily handled in advance.”

DeChellis described his team’s performance as Jekyll and Hyde.

“When we played the ball on the carpet and moved it through the thirds, we were brilliant.  When we decided to start launching balls in every direction it got a bit ugly,” he said. “The game had a lot of positives but we need to work on being more patient. We have a very young team so that will come with more experience. Other than the score, I walked away from that game happy with the work the guys put in and what’s to come.”

Rookie goalkeeper Vinson Notarianni made a strong debut for the Knights.

“We could not have asked anymore from Vinnie in his debut and we are so happy for him on his performance in front of a packed house that included his family and friends,” DeChellis said. “He and Anthony (Argueta) have been working so hard with Gerry D’Angelo and it showed during the game.  There were times he kept the game close when we had a few brief spells of being disorganized on the field.”

“It was exciting to play in front of a packed house Friday night for my OCAA debut,” he said. “It was not the result we wanted but we have a long season to go. We did a great job battling for the full 90 and still had the opportunity to secure points.”

Co-captain and second year midfielder Joel Mariñas felt his team started slowly but did much better once it started to asset itself.

“We showed grit in the second half and with Vinny keeping us in the match on several occasions. It’s unfortunate our efforts didn’t result in a goal,” he said. “You never want to lose, but when we look back at the film and make the necessary adjustments, this loss will make us better.”

Niagara returns to action on the road Wednesday against Sheridan. Sheridan opened its season with a 4-1 quadrupling of Redeemer.

Niagara’s women’s soccer team led 1-0 at the half on a penalty kick by 2021 player of the year Sydney Sica in the 32-minute mark before Conestoga tied it up in the 82nd minute on a controversial penalty kick goal by Megan Heyes.

“A no-call on arguably a penalty kick for us and then a questionable penalty shot awarded to Conestoga to tie the game,” he said. “The visitors were organized and more willing to battle for the 50/50 balls. Tough loss, but we will regroup and prepare for Tuesday’s game against Sheridan.”

Sheridan enters the game Tuesday with a 1-0 record.