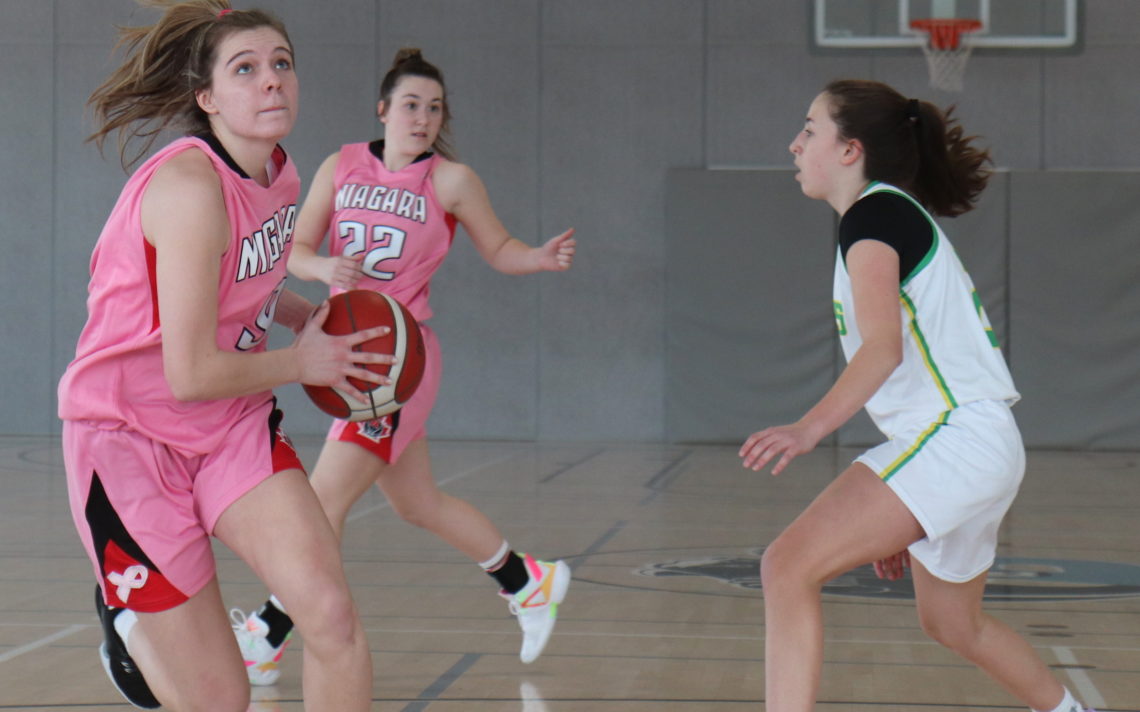 Sarah Hurley, shown above playing for Niagara Juel, will be competing for Team Ontario in basketball at the Niagara 2022 Canada Summer Games. BPSN Photo.

Seven Niagara athletes will be going for gold in the first week of the Niagara 2022 Canada Summer Games.

Sarah Hurley and Corrynn Parker are on Team Ontario’s basketball team, Zubin Gatta and Sarah Guenther will be in action on the wrestling mats, Mason Petrucci will be trying to score goals on the soccer pitch, Emily Skulj-Thompson will be making waves in the water and Aiden Taggart will be swinging for the fences on the baseball diamond.

Hurley, a 16-year-old Fonthill resident, played on the Niagara Juel basketball team and also with the Kia Nurse Elite EYBL 2024. The E.L. Crossley student has aspirations to plays at the NCAA level and made her first unofficial visit to the University of Buffalo in June.

Parker, a 17-year-old Fenwick resident, is a power forward with the Niagara Prep girls team.

The former Saint-Jean-de-Brebeuf student won an OBA Division 1 gold medal for the second time in 2018 and a Juel Prep championship in 2019. In 2018, she competed in the Junior NBA World Championships in Florida.

Gatta, a 16-year-old Niagara-on-the-Lake resident, is a member of the Brock Wrestling Club and has been wrestling for 11 years. The Grade 11 student at Eden won the 2020 Ontario Winter Games and was the 2020 Ontario Federation of School Athletic Associations’ champion at 38 kilograms in 2020. He is a five-time provincial champion and was sixth at 55 kilograms at the 2022 Cadet national wrestling trials.

Guenther, a 19-year-old Niagara Falls resident, has been competing for three years and was the Southern Ontario Secondary Schools Association 44-kilogram high school champion in 2019 and 2020. She was named co-winner of the outstanding wrestler at A.N. Myer for the 2021-22 school year.

Petrucci, an 18-year-old St. Catharines resident, has been playing soccer for 14 years and is currently a member of the Toronto FC Academy. The 5-foot-9, 150-pound striker is a graduate of Saint Francis and formerly played with ProStars League 1 reserves.

Skulj-Thompson, Thorold, a 19-year-old Thorold resident, is a member of the St Catharines Otters Swim Team and has been swimming for 11 years. Her specialties are the 100- and 200-metre breaststroke. In 2018, she won Special Olympics provincial titles in the 25-, 50- and 100-metre breaststroke and 50- and 100-metre freestyle. She also won silver and bronze at nationals that year.

Taggart, a 15-year-old Grimsby resident, suits up in club baseball with the Fieldhouse Pirates and has been playing for nine years. The 6-foot-3, 185-pound pitcher and outfielder won a Canadian Premier Baseball League 14 and under championship in 2021 and was names a CPBL All-Star in 2022. He is student at Grimsby Secondary School.