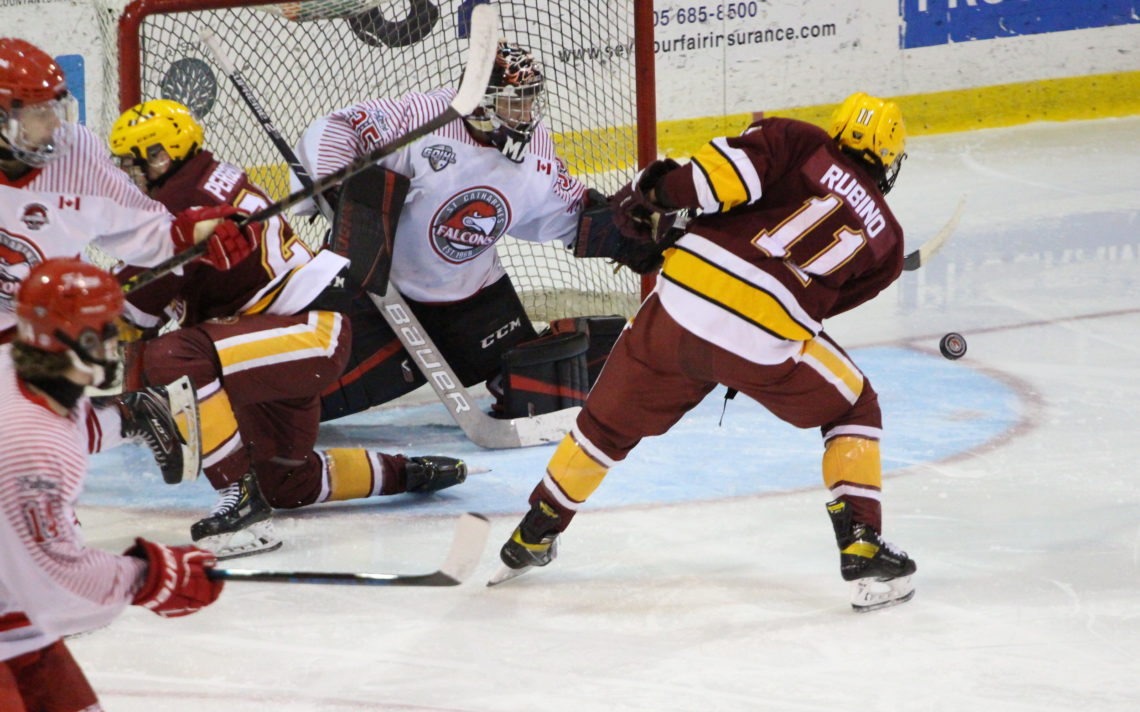 When Olivier Desroches stepped on the ice for the St. Catharines Falcons Friday night it was his first competitive game of hockey in almost two years.

The 20-year-old native of Laval didn’t see action last year due to the COVID pandemic and was a member of the Brock Badgers this season, but didn’t see any action.

So when the opportunity to play out his last season of junior with the Falcons presented itself, the big rearguard jumped at the chance.

“I enjoyed it a lot, but it was pretty rough with my cardio,” Desroches said, after picking up a pair of assists as the Falcons defeated the Thorold Blackhawks 6-2 in a Greater Ontario Junior Hockey League, Golden Horseshoe Conference game at Jack Gatecliff Arena. “It was pretty hard but I’ll get used to it and I should get better.”

Desroches, who has experience with four teams in the Quebec Major Junior League, likes what he has seen from his new team.

“It’s a good team,” he said. “I looked in the standings and saw we were second and I could see tonight. We skated hard and have a good coach.”

Expect Desroches to play a significant role with the Falcons.

“It feels good. I was in the Quebec Major Junior League and it was tough to play a lot of minutes but I was getting more minutes at the end but here I can feel my confidence growing,” he said.

Falcons coach Tyler Bielby, who celebrated his 39th birthday Friday, loves what his new addition brings to the team.

“We were very pleased with the guys we had all year, in particular our captain Joe (Colasurdo) and (Jonah) Boria, and he’s just adding a whole new level,” Bielby said. “We think he’s going to help us be successful with the way he dictates the pace of the game with the puck on his stick.

“He does a lot of things well.”

Bielby said adding a player of Desroches’ talent can be a real boost to a team’s mentality.

“I think it builds confidence and lets them know we’re really dedicated to helping this team win,” he said. “When you win as a team, it helps individual success and I think the boys really rally around those kind of concepts and ideas.

“The boys welcomed him into the room with open arms, and more importantly, a guy coming down it’s very important he doesn’t come in with too much of an attitude. He eats humble pie, he’s a real good kid, and he’s enjoying the boys.”

The Falcons led 3-1after one and extended their lead to 5-2 after two.

Things got chippy in the third as Blake Yetman and Hawks captain Nicolas Rubino dropped the gloves while Thorold netminder Nico Balice charged out of the net looking to entice Chris Reid into a scrap. Balice got the heave-ho for his efforts.

“It was kind of a strange one,” Bielby said. “When it’s all said and done, it’s a Friday night coming off a tough loss and we won 6-2.

“We still have to work on putting 60 minutes together. We don’t want to critique a 6-2 win too much, but we could still be a lot better.”

Falcons facts: Cal Reesor, Aiden Cupelli and Josh Reilly did not dress for the Falcons . . .Dalton Wright, Tanner Hunt, Liam Loftus and Nathaniel Krbavac were scratched for the Blackhawks  . . . The Niagara Falls Canucks topped the Welland Junior Canadians 7-3 Friday.  .  . The Falcons will be holding a food drive at their home games Dec. 3, 10 and 17.

Up next: The Falcons are in Thorold Monday and home to Fort Erie next Friday.