The 6-foot-3 forward seldom left the floor. Moving on to play NCAA Division 1 basketball with the St. Francis Brooklyn Terriers would require a major adjustment.

“I definitely found it a lot harder my freshman year to understand everybody on my team was a superstar in high school and everyone is good,” the 19-year-old St. Catharines native said. “I found it hard to sit on the bench. You cheer everyone on, but it’s hard.”

The biology major finished her first season of university ball averaging 12.1 minutes of playing time, 3.6 points and 2.3 rebounds per game.

Heading into her first Northeastern Conference game late last month, she was averaging 11.6 minutes, 2.8 points and 2.2 rebounds per game. She more than doubled her points average in that game, a 61-59 loss to LIU Brooklyn, scoring six points in eight minutes of floor time. 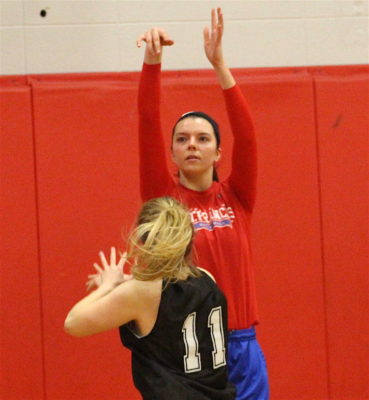 “I feel this year we have a much stronger team,” she said. “Last year, we had mostly all lower classmen and they are now juniors and seniors.”

Including Keltos, there are two sophomore players and three freshmen on St. Francis.

“The starters play a lot of the game and I feel my coach is still trying to figure out a rotation for the bench players,” the former Niagara JUEL player said.

In the team’s last game before the Christmas break, head coach John Thurston surprised her by praising the bench in a post-game interview.

“We were all so happy,” she said. “We work hard just like everyone else so it was nice.”

She started the season getting less minutes in than her freshman year but is now back to the minutes she received last season.

“It’s 10 or less some games, depending on how the starters are doing, and the most I’ve played in the season so far is 20 minutes.”

She usually plays at the four spot for the Terriers.

“I’m am OK when I have to play inside but I prefer to play on the perimeter,” Keltos said.

She feels she has taken a lot of strides since arriving in Brooklyn.

“Even though you are both feeling it, you have to cheer everyone on.”

She communicates with her mother, Sharon, every day and they discuss a positive and a negative that happened to her on the court.

“We talk about different things that could come up in a game or things that I could do to turn the game around or make up for a mental mistake I’ve made,” she said.

She also communicates in some form every day with her father, Frank, and 12-year-old sister, Brookelyn.

“I miss the little munchkin,” she said. “It’s fun to come back and see how much she had grown.”

On the court, her shooting has improved and she is physically stronger than she used to be. That added bulk had helped during games.

“I feel it in rebounding the ball; that extra strength to hold on with,” she said. “And when I am posting up. I can hold people off better now.” 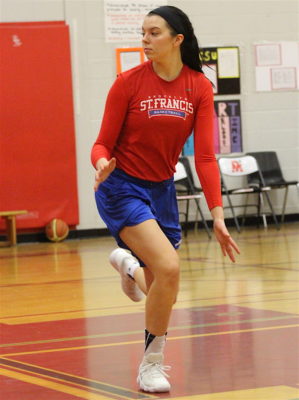 In a quote posted on the St. Francis athletics website, Thurston said Keltos is developing into a high-level player.

“At 6-foot-3, she gives great size on the wing without sacrificing versatility. Always a good post up player, she is now an excellent deep threat as well,” he said. “Her ball handling has improved and she has become a defensive presence with her shot blocking, rebounding and ability to get her hands in passing lanes.

“We are really excited about her future.”

Keltos has settled in nicely to the role of student/athlete.

“I have been doing it all my life so I am pretty used to it,” she said. “The biggest struggle I’ve had is we have practices early in the morning so I have to wake up at 6:30 every day or earlier.

“Having that energy early in the morning to practice for two hours is probably the worst part of it.”

Her typical day starts on the basketball court at 7:15 a.m. If it’s a good practice, the team is on the floor for an hour and 15 minutes.

“If we are a little sloppy it is an hour and a half,” she said.

She had later classes first semester so she was able to squeeze in a nap or get homework done until classes started.

“Then I would do homework after class and go to bed at nine o’clock.”

On off days, Ketlos and her teammates explore New York City.

“We look for the best places to eat in New York and we try to find them and go there.”

She is comfortable in the Big Apple.

“On a daily basis, it just feels like home now,” she said.

Her favourite spot is Times Square.

“It’s not a lot because you can walk through it in 15 minutes but being in the middle of it you see all the signs and all the people dressed up in costumes to take pictures with you,” she said. “It is something I have never seen before.”

The NCAA experience has been all that she hoped it would be.

“I think some of my other friends who are at higher level schools — Division 1 but better conferences — and they don’t play as much,” Keltos said. “I look at that and it makes me happy that I am playing the 10 minutes that I am.

She loves her program and feels the school is a great fit for her.

“It’s small and the biggest class I’ve had had maybe 40 people in it,” she said. “I love my team and the facility. It’s a small gym but they take care of it very well.”

A typical home game will see about 50 fans in attendance  and she estimates the biggest crowd she has played in front is about 1,000.

Keltos isn’t sure what she wants to do with her biology degree but is leaning towards a career in forensics.

“I volunteered in a funeral home the past summer to do something with the human body,” she said.

Her friends were surprised at her choice but she found it interesting. She even helped embalm a body.

“I wasn’t prepared for its but after the first 20 minutes it was ‘This is cool. I can do this,’ ” she said.