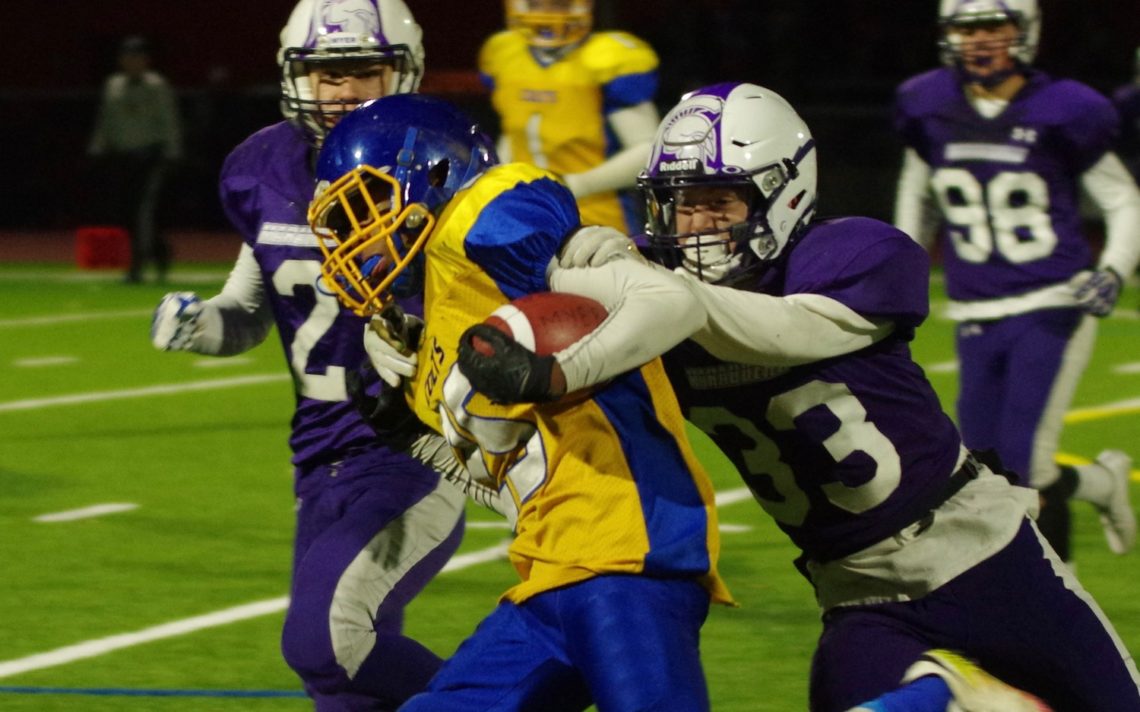 The A.N. Myer Marauders junior football team advanced to the Metro Bowl semifinals with a 14-13 win over Brantford Collegiate. Photos by PETER METHNER.

The A.N. Myer Marauders junior football team rode the heroics of player of the game Jacob Burke to a 14-13 victory over the visiting Brantford Collegiate Colts Tuesday in the quarter-finals of the Metro Bowl playdowns.

Myer’s quarterback tossed a 65-yard touchdown pass to James Prew and a 10-yard scoring strike to Jordan Gilbert to lead his team to victory. Prew’s major came in the first quarter and Gilbert’s score came with four minutes left in the game and the Marauders trailing 13-7.

“He put the game on his shoulders in the fourth quarter and rallied us for the win,” Myer head coach Dave Lupish said. 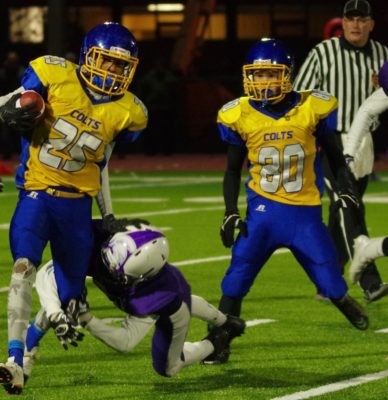 The winning drive started deep in Myer’s end and a quarterback draw from Burke saw the Marauders advance 70 yards down the field on the play. Myer had the ball on Brantford’s 25-yard line and following a short run and a holding call which made it second and 18 yards, Burke scrambled to the 10-yard line for a first down.

“On the next play, they brought heat up the middle and he should have been sacked, but he broke a couple of tackles, rolled out to the right and found Gilbert in the end zone for the touchdown,” Lupish said.

“Of course, he does all the kicking too and he made the extra points that were crucial obviously for the win.”

Myer’s offence didn’t really click for most of the game and the defence kept the Marauders in the game. The defence was led by the play of Zack Ayotte and Chris Bechkos.

“They made some key plays,” Lupish said. 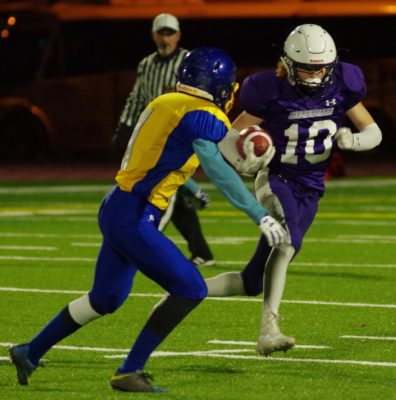 Because Brantford plays in a league with four-down football, the first half was played using three downs and the second half utilized four downs.

“They started to grind it in the third and fourth and ate up a lot of clock on us with long drives,” Lupish said. “But once they got down into our end, we were able to hold tight.”

The defence also came up big at the end of the game, keeping the Colts out of field position that would allow them to kick a game-tying rouge.

“It was a bend not break defence that gutted it out and made key stops when they had to make stops,” Lupish said.

The Marauders advance to St. Michael’s College in Toronto Saturday at 2 p.m. to play Mississauga Lorne Park in the semifinals.

“I hear that they are a talented and fast team with a good air attack,” Lupish said. “We will have to look at some film and get on it.”

Myer last won the Metro Bowl in 2013 led by the play of Tyrell and Tre Ford and a boatload of talented stars that would go on to win three straight Ontario Federation of School Athletic Associations Bowls at the senior level.

Lupish was the special teams coach that year and Rob Colosimo and Bobby Ford were the offensive and defensive coordinators. The latter two are back in the same roles and Jim Bechkos also helps out with the defence.