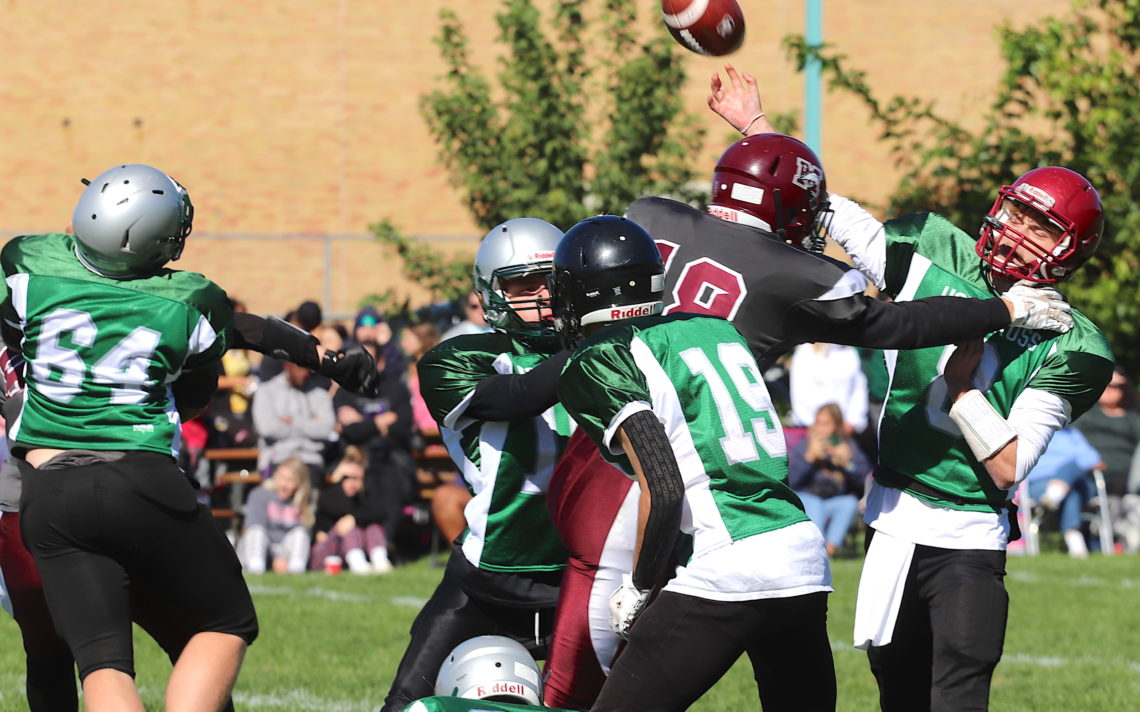 Luka Dermott’s first-ever game at quarterback was a roaring success.

The Grade 11 student at Saint Michael threw for three touchdowns and rushed for another Friday as the visiting Mustangs recorded a 34-0 victory over the Holy Cross Raiders in the opening game of Niagara Catholic Athletic Association senior football action.

“I played slot receiver last year on the junior team and I decided to try out for quarterback this year and it went pretty well,” the 16-year-old said.

“I feel like we have all the pieces and I wanted to lead my team. We needed someone to put it all together. I want to see my team succeed and I feel that I can help it do that.”

His quarterback experience was zero heading into Friday’s game.

Dermott knows he has lots to figure out in order to succeed at the position.

“I have to learn what my players are good at, what they can improve on and piece it all together,” he said. “Our goal is to be successful and improve for next year.”

“He is very athletic. He plays baseball and basketball and he played five sports at Saint Michael’s last year. He is very coachable and he works hard. All you can ask from the kids is that they try their best.”

Carter likes the leadership Dermott has shown this fall.

“He is there at every practice unless he’s sick. He is in the changeroom early, he looks at the plays and he does what I ask him to do. The other kids believe in him.”

He expects Dermott to quickly become comfortable at the position.

“Being in the same offence as a receiver last year has helped him because he understands the receiver routes and the blocking schemes. It is not like he is brand new to the offence. He has just moved positions.”

Saint Michael is back in the senior ranks this year after a one-year hiatus where the school only field a junior squad.

“It’s great to have a team again,” Carter said. “A lot of the kids from last year have moved on to senior from junior and we have some other kids who didn’t get a chance to play last year. They were excited to play senior football again at Saint Mike’s.”

Carter feels it is necessary to have senior football at the school.

“It is important for school spirit. It is a large team with a lot of players and it is big sport for the community to come out and watch. And it is exciting,” he said. “I am biased as a football coach but it is good for the young men to play together in a physical game. It teaches a lot of teamwork and dedication and that is what a lot of people are looking for when they leave high school and go into the work world and raise a family.”

The goal for the Mustangs this season is to win as many games as possible.

“We want to get these guys better. They are inexperienced and they don’t watch football a lot of the time so we are trying to teach the game to them,” Carter said. “We want to keep building every week and ultimately try to get into the championship game again.”

Like Saint Michael. Holy Cross is returning to the NCAA senior ranks after only fielding a junior squad last season.

“Our junior team last year matured up so we wanted to give them an opportunity to play football this year,” Gerry DiSanto. “We also had Saint Francis players come over this year and that was an addition of some really good players who we are very excited about.”

Twelve Saint Francis students are on the roster and the goal for the team is straight forward.

“We just want to be competitive. It’s a work in progress,” he said. “We wanted to be back in senior football and hopefully challenging for a title.”