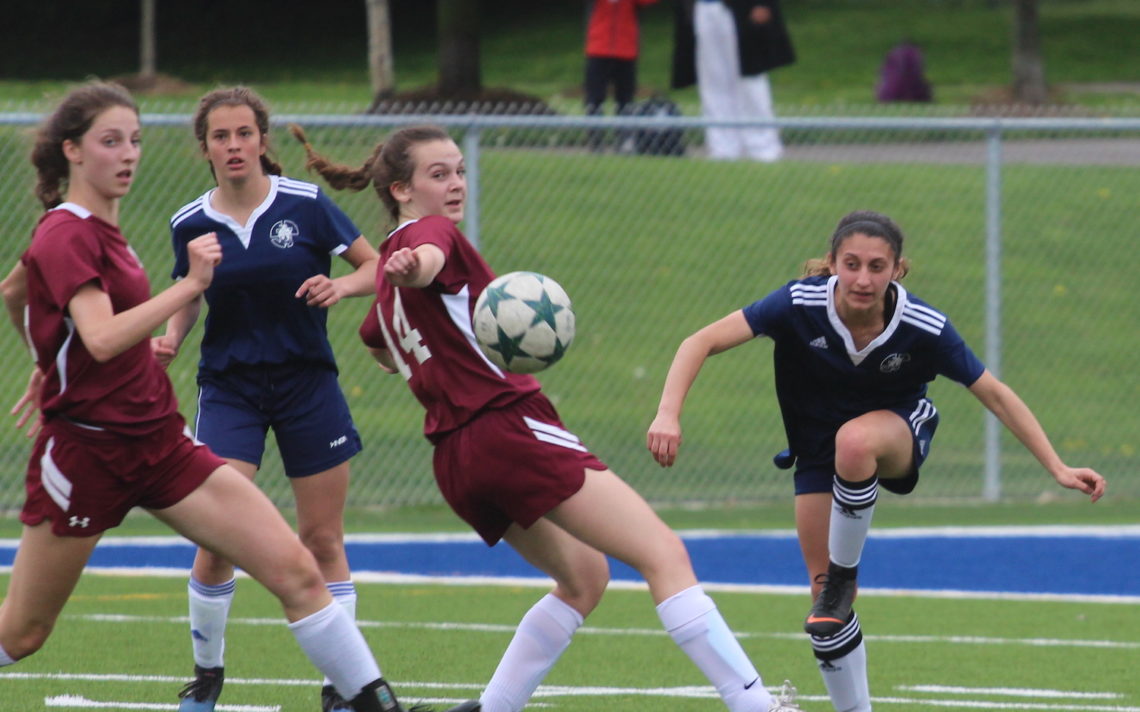 With a berth in the Zone 3 AA girls soccer final on the line, the visiting Saint Michael Mustangs recorded a 3-2 victory over the Saint Paul Patriots Tuesday afternoon.

Saint Michael grabbed a 3-0 lead at the half and then ended up hanging on for the victory.

“I was very pleased with how the girls came out,” Saint Michael coach Amber Benoit said. “They came out flying and scored some really nice goals.”

She felt her team also has a strong second half, but were thwarted by some good saves by the Saint Paul keeper.

The Patriots clawed their way back into the game with a penalty shot goal and a shot from half that went over the head of Saint Michael’s goalie.

Benoit has seen her team build momentum as the season wore on.

“It has been an up and down year for us,” she said. “For the first time in over five years, we lost a league game.”

That loss came versus Blessed Trinity.

“It has been a building year and we came out amazing today and I couldn’t have asked for a better win,” Benoit said. “It was absolutely amazing to watch and I couldn’t be any prouder heading into zone finals.”

Saint Michael has had a lot of success recently in girls soccer. The Mustangs made it to the Ontario Federation of School Athletic Associations championships for the fourth straight year in 2017 and made it to the quarter-finals. In 2016, the school won an OFSAA silver medal.

Scoring goals for the Patriots were Alexis Baird and Maya MacLean.

Saint Paul was almost able to get the game even but couldn’t finish off the rally.

“We changed our formation and it ended up in two goals being scored and then we just ran out of time,” coach Steve Abbruscato said. 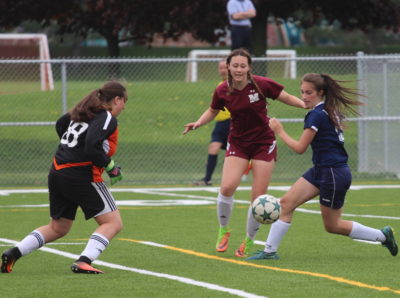 The Patriots were disappointed in the loss after ending up tied for first in NCAA league play with a 5-0-1 record.

“This was the one we definitely wanted because this allows you to move on to the zone finals and then to SOSSA and OFSAA,” Abbruscato said. “Now we can’t do that, but perhaps the consolation prize could be winning the NCAA final.

“It would mark the end of a tremendous season for our team.”

Abbruscato felt his team had a strong season thanks to its strong nucleus.

“We have several young and talented players that will be playing for the program for years to come and we had a great Grade 12 leaders.”

The Saint Paul Patriots earned the right to represent the Niagara Catholic Athletic Association in the Zone 3 AA boys soccer final with a 5-1 victory over the visiting Saint Michael’s Mustangs Tuesday.

“We started off our first game against Holy Cross and we were a little sluggish but we’ve made some adjustments and we are finding our groove,” Saint Paul coach Aldo Seca said. “We are peaking at the right time.”

The Patriots have played better since switching to a 4-4-2 formation from a 4-5-1.

“We have juggled guys in starting positions and we found what we needed to do,” Seca said.

Against Saint Michael, the Patriots certainly did what they needed to do.

“Our finishing was good and we play well in terms of moving the ball nicely and our positioning was sound,” he said.

“Consistently we have been pretty strong,” Seca said. “I have been here 19 years and it’s a strong soccer school.”

Scoring for the Mustangs Tuesday, who had a 0-6-1 record in NCAA play, was Carter Kurcz.