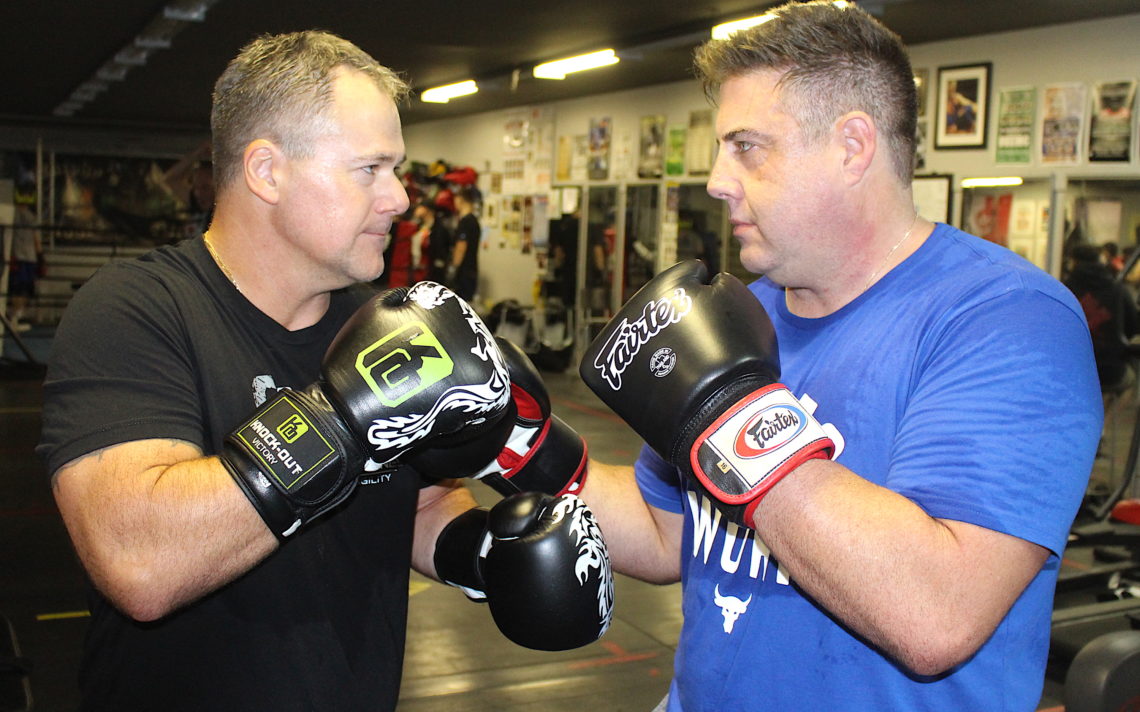 Berny Portolesi and Corey Belliveau have been competing against each other for years.

After meeting as hockey parents, the pair went Mano-a-mano against each other in Crossfit and Tough Mudder events.

Last year, Belliveau, a Grade 3 teacher at Connaught Public School, watched fellow teacher Ryan Baulk take part in the Murphy’s Gloves event put on by the St. Catharines Amateur Boxing Club. The event pits people from the community with little or no boxing experience against each to raise money for the club.

Belliveau contacted Portolesi. who works at the Niagara Region as the manager of skilled trades, to see if he was up for the challenge.

“I in turn contacted a friend who did it the year before and he loved it,” said the 49-year-old Portolesi. “He gave it great reviews, said it was a lot of fun and really exciting. He had a lot of fun doing it, his whole family got involved and it was for a great cause.”

Money raised at the event is used by the St. Catharines boxing club to sent its fighters to national and international events.

“What an opportunity for them and this is an opportunity to help kids, open their eyes and give them a chance to see life in a different place,” Portolesi said.

Belliveau is also a big fan of the cause.

“It is a feel good moment,” the 47-year-old said. “We are raising money for young guys and up-and-coming young kids and it helps them out a lot.”

No winners are declared at Murphy’s Gloves, but that won’t prevent Portolesi and Belliveau from doing so.

“We are dear friends, I love him to death but we are very competitive and we will try our best against each other,” Portolesi said. “All our friends and family have side bets and I think my wife is in his corner and his wife is in mine. I think they want to see us get punched a bit.”

Belliveau is also in it to win.

“It’s one of those things that we care about each other and want to make sure each other is OK but there’s an underlying competitive nature too,” Belliveau said. “He is little bit more of a chatter than I am, He gets the better of me vocally but we will see what happens in the ring.”

Belliveau is laying down the gauntlet.

“It will be no contest,” he said. “I will be the winner no matter what.”

The pair have been training for about five months and have been blown away by the experience.

“I have the utmost respect for Joe and his family,” Portolesi said. “You can see the bond and it’s incredible. Being an outsider like myself and a non-boxer who has to learn everything and these gentlemen, including the youngest boxers, take you in like family and show you how and give you tips.”

Belliveau has had the same experience.

“As soon as we walked in here, everyone was willing to help us out,” he said. “They (young fighters) have jumped in the ring with us. It is a bit scary at first when you are fighting a provincial champion but they have all been gentlemen and just amazing.

“I can’t believe the community here and to help them out is what it is all about, for sure.”

“I am really fascinated with how talented these guys are and I’m surprised how much I have learned in the past four or five months being a part of Joe’s family,” he said. “It is just amazing how complicated this sport is. A lot of people think it is just hitting and it’s not.

“I’m looking forward to seeing everyone compete at the event .”