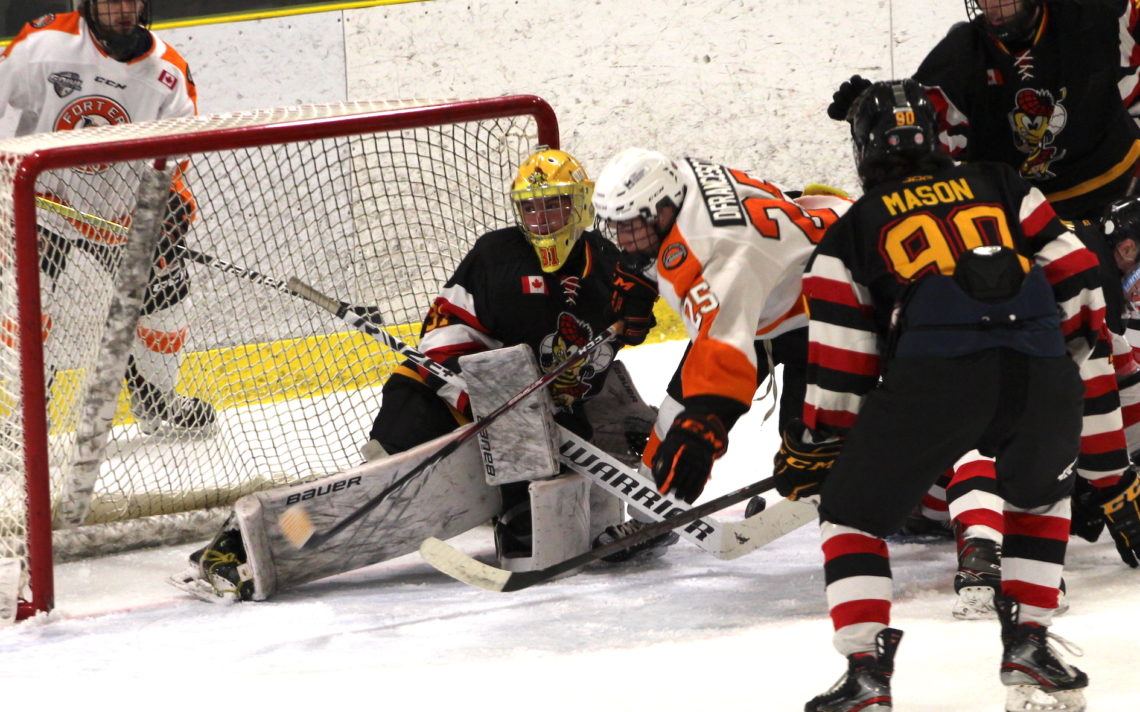 Hunter Zoccoli is playing his best hockey at the most important time of the season.

The 18-year-old St. Catharines native had an inconsistent regular season for the Fort Erie Meteors, but has taken his game to the next level in the post-season.

Zoccoli scored late in the second period to break a 1-1 deadlock. It was the big winger’s second playoff goal and seventh point in eight games.

“It’s awesome hearing that crowd,” Zoccoli said. “It’s a great feeling getting the game winner and tying the series.

“It was great to bury that goal that put us up one.”

“He’s been through some real trials and tribulations,” Passero said. “He’s been in and out of the lineup, his game wasn’t where he wanted it or we wanted it. He really struggled this year but what he’s doing in playoffs is special. The kid’s got a huge heart and he showed it again tonight.

“I can’t overstate this enough. He has been through a lot of stuff, on and off the ice.”

Each team has won twice on their home ice in the series.

“It’s awesome. The crowd’s great,” Zoccoli said. “They’ve been waiting for this for such a long time.

“It’s kind of quiet playing up there but there’s a big difference here. They have our backs. I think they’ve played a big part in this series.”

Zoccoli feels the Mets just need to keep doing what they are doing and they will find a way to pull one out on the road.

“Both games we’ve had a lead up there,” he said. “We just have to stay defensive. I think we can do it for sure. I feel like we’ve outplayed them this whole series. If we get up again there we just have to shut down on D.”

The Meteors lost both games in Hamilton by scores of 4-3, but Passero feels his squad could have won both of the games at the Dave Andreychuk Mountain Arena.

“I think they were unfortunate in Games 1 and 3, but I think for a lot of the series we have taken it to them,” Passero said.

“We’re flying right now. When we have a goalie like we do, we get away with some things defensively. When you have Duncan Nichols-Delay in the net, we’re going to be tough to beat.”

The Meteors don’t appear the least bit in awe of the Kilty B’s, who posted the top winning percentage in the GOJHL.

“They’re really good,” Passero said. “They’re well coached, he’s (Hamilton coach C.J. Morrison) has done a great job over there, but they’re 16 to 20-year-olds and they put on their skates the same way we do. For a long time in this program we didn’t believe that. It was Niagara Falls and St. Catharines and Caledonia.

“I think now we realize they are 16-20 just like us and they’re going through the same things.”

Tyler Decoff gave Fort Erie a 1-0 lead early in the first period with his first of the playoffs.

The Kilty B’s tied the game 12 minutes into the second when Justin Monteith scored on a power play.

“Every game has been tough this series,” Zoccoli said. “That’s just how it’s going to be. When they tied it up the bench didn’t get deflated at all. The bench stayed up.”

The Kilty B’s pressed for the equalizer, pulling goalie Braedyn McIntosh with over three minutes to go for the extra attacker. They best chance to score came with under 30 seconds remaining but Nichols-Delay made a huge pad save on Andrew Lukezic to preserve the win.

Up next: Game 4 Monday in Hamilton. Game 5 Wednesday in Fort Erie.

The visiting St. Catharines Falcons rallied from a 3-2 deficit with three goals in the third period to top the Caledonia Corvairs and take a 2-0 lead in their best-of-seven semifinal.

“It was an old fashioned Caledonia versus Falcons playoff game,” Falcons coach Tyler Bielby said. “Thought we stuck to the process the entire 60 minutes and found a way to come out on top.”

The game was tied 2-2 after two as Sam Williamson Jonah Boria scored for the Falcons while Ben Mason and Calvin Crombie replied for the Corvairs.

Dylan Dekoe gave Caledonia a brief 3-2 lead with a goal early in the third before Jordan Schanbacher scored twice to put the Falcons back on top 4-3. Mitchell Armstrong then iced the game away with an empty-net goal at 19:06.

“It was also nice to see our depth really contribute. The Glenney brothers and Armstrong combined for three goals. Anytime your depth can do that, you should win the hockey game.”

Game 3 is Monday at Jack Gatecliff Arena with Game 4 back in Caledonia Wednesday.