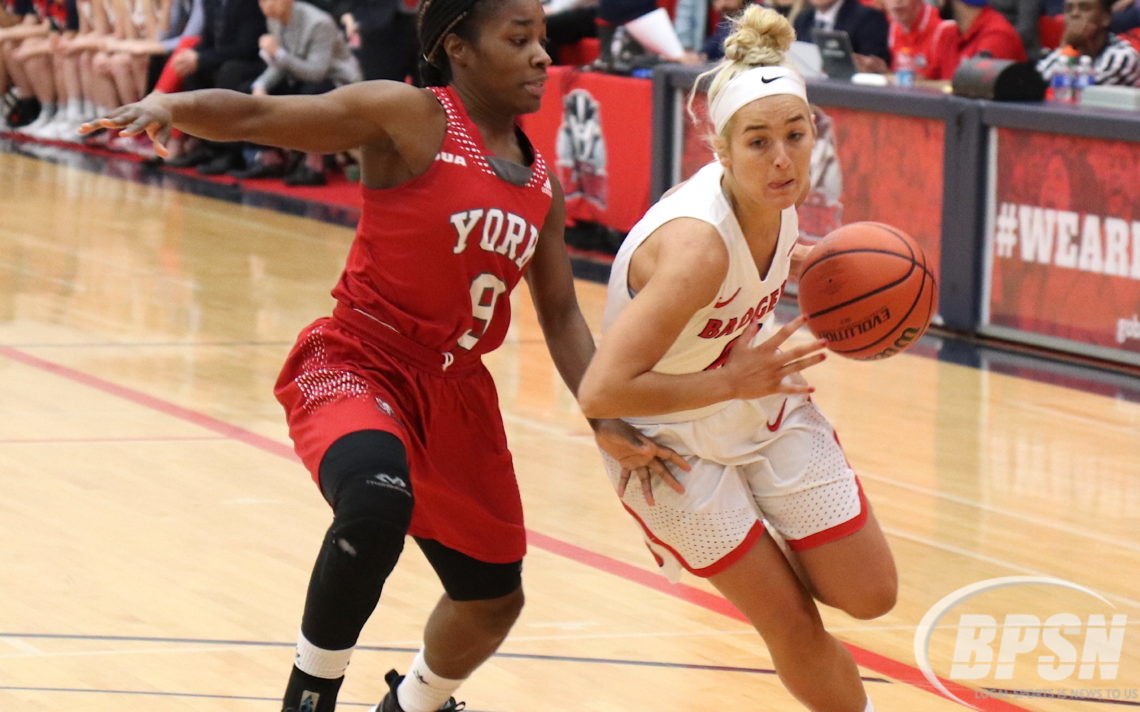 Down 51-32 heading into the final quarter against the Windsor Lancers in a second-round playoff game, Melissa Tatti thought her Brock University basketball career was coming to an end on a late February 2020 evening at the Bob Davis Gymnasium.

“I just remember Jess (Morris) and I were the seniors and it was ‘OK, let’s just play this out because this is our last couple of minutes to have some fun.’ ”

It turned out to be just the beginning of a crazy run that would carry the Badgers all the way to Brock’s first Ontario University Athletics’ women’s basketball championship since 1983 and a silver medal at the USPORTS championship. For Tatti, it was a key moment in a fantastic season would net her OUA Player of the Year, First Team OUA All-Star and First Team All Canadian honours and, most recently, the nod as co-winner of the 2020 St. Catharines Athlete of the Year Award along with teammate Sam Keltos.

Brock opened the final quarter against Windsor with a 13-2 run, sparked by six straight points by Tatti, After a Windsor bucket gave the Lancers a 55-44 lead with 5:34 left, it was time for Morris to step up. She went on a personal 10-2 run, included 5-6 from the free-throw line after being fouled on a pair of three-point attempts, and suddenly the score was 57-54 with 2:38 left in the game. It was then Tatti’s turn again. She hit a three to tie the game at 57-57 with 2:03 left, had a steal to set up a Kristin Gallant bucket that made it 59-57 Brock with 1:31 left, and then iced the game at the six-second mark with a pair of free throws.

“After that game, anything was possible and I thought we could do it,” she said. “That game was really a turning point and gave us momentum but then we had to do it again against Western (in the next round) when we were down 14 at the half. We liked to dig ourselves a hole and come back.”

The 24-year-old Ancaster native knows she lived through a special time with a special group of teammates.

“It was the passion and the family aspect of everything. It just flowed so well and we all just got along so well. I feel our chemistry off the court definitely transferred on to the court and we took each game as it went.”

At no point, did she stop to ponder where the team was heading.

“It was next game, next game, next game and all of a sudden we made it to the championship. Then it was ‘I have no idea how we did this but we are here.’ Obviously winning the OUA championship was probably the nicest thing because we were doubted game in and game out and no one ever thought that we would make it there and we did,” she said. “Proving everybody wrong felt really nice.”

Tatti described going to nationals as fun and dreamlike.

“The fact that the world stopped right after that weekend is something you think about so often because it was the last time the world was normal,” she said, referring to the COVID-19 pandemic.

“I love Rao,” she said. “He still calls me every once in a while wondering how I’m doing. He keeps in touch with all of us, he is really personable and he cares. That is the biggest thing. He genuinely cares about the girls on the team.”

“He just let us play. There were Xs and Os but he knew we weren’t the type of team that executed perfectly. He wanted us to play off of what we felt and get a feel of the game,” she said. “A lot of coaches put too many Xs and Os in and forget that we are players and we can just play. He put a lot of trust in his players, especially myself, Sam and his other starters. The respect to us, we gave back to him.”

That mutual respect created a perfect atmosphere for winning.

Those fans were a resilient bunch.

“They followed us everywhere and it was so insane. There was a snowstorm going to Western and there was a whole crowd of people. I couldn’t believe there were so many people there and it was such a surreal experience.”

When Brock defeated Ryerson 84-71 to win the OUA championship, Tatti couldn’t help but think back to when she and several other members of the team decided not to play for Brock in the 2017-18 season.

“I thought about that the whole year,” she said. “It was a tough year and I tried to forget about it. I don’t even need to think about it now because the (last) year finished on such a great note. I used to harp on it and be angry toward the whole situation but now I think that everything happens for a reason and everything worked out in the end the way it was supposed to.”

“It was a definite learning experience and it had a big impact on the way I played in my last couple of years.”

The one-year absence made her much hungrier to succeed and it also gave her time to be with her family in a time of great need.

“My brother (Ryan) passed away from cancer at 26 and that was the year I ended up taking off. I was home with him,” she said. “I was never going to come back and play basketball. I was fine doing my business and stuff, but when my brother passed, I felt that my parents (Karen and Tally) needed something a little bit normal in their lives.”

That normalcy came from basketball.

“They loved watching me play basketball and my dad was my coach for 18 years until I went off to university,” she said. “I knew that I needed to do it for not only me because I needed to redeem myself after my third year and Rao coming in to be the coach. It was an opportunity for me to play and finish out my career at Brock  and also to do it for my parents and my brother.”

Tatti knows her brother was along for the championship ride.

“I swear this was his doing when we come back from 18 points down. Someone up there was doing something for us.”

“I had 30 points and the two games in a row after that I had 30 points again. His hockey number was 30 and I could not break 30. I was trying so hard and there was four shots in the fourth quarter that I was jacking up and everyone was saying, ‘Just shoot.’ Nothing would fall and I was thinking it was because he was up there doing this for me.”

Tatti was ecstatic to be named co-winner of the prestigious award.

“I didn’t even know that it was an award that existed but I am so honoured to be a co-winner with Sam. It’s such an honour and anything that is going to give the program more awareness is good. I was thrilled.”

She was even more thrilled when she dug up a list of the previous winners and saw that it included NHL hockey players, world champions and Olympic medalists.

“I am pretty sure Sam and I are one of the first winners who were university athletes,” she said.”It is crazy that we won and I never would have expected that.”

Now that she has graduated, Tatti has focused all her energies on her ThreadsObsessed YouTube Channel that boasts 167,000 subscribers. She blogs her daily routines, her buying expeditions to thrift stores, she makes fashion videos and shows off her thrift store purchases that she sells online.

“I have always been into fashion and thrifting. It is something I started in my second year as a little hobby and I never thought it was really going to be a career. Now it’s my full-time job.”