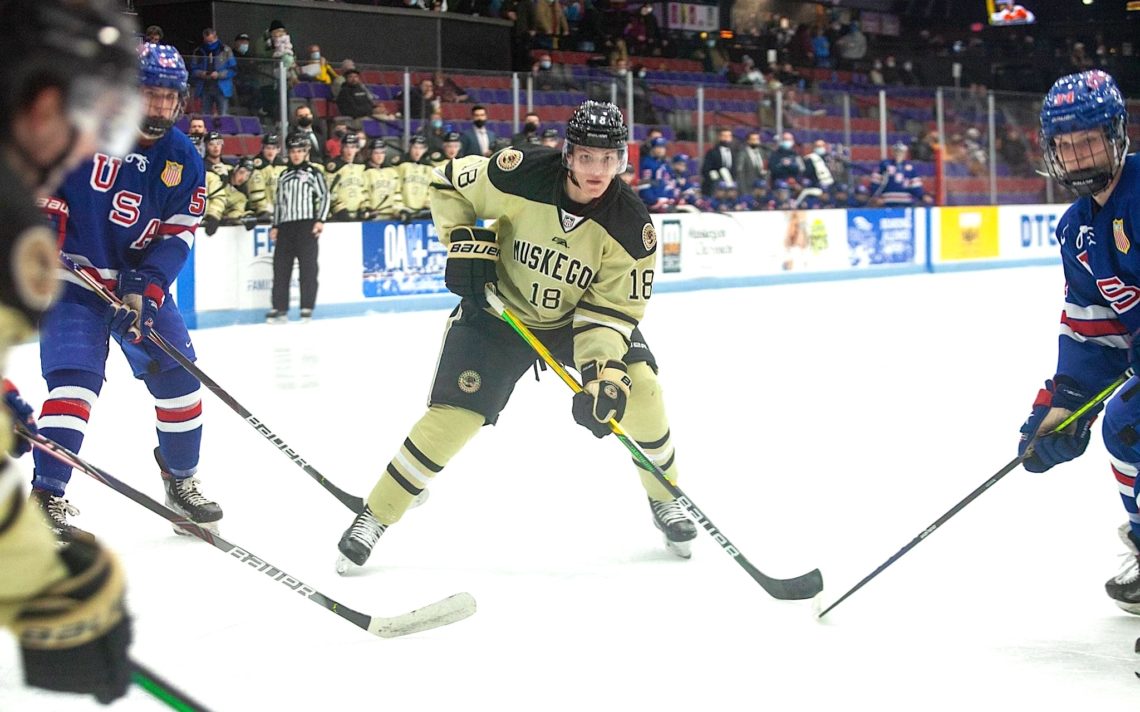 Heading south of the border proved to be a win-win decision for Owen Mehlenbacher.

The 17-year-old Fort Erie native played last year with the Buffalo Jr. Sabres before moving to the Muskegon Lumberjacks of the United States Hockey League this season.

Mehlenbacher feels those decisions were a major factor in being able to secure a scholarship to the University of Wisconsin beginning in the fall of 2022.

“I’m ecstatic,” Mehlenbacher said. “I played for Buffalo last year and that move got me a lot exposure and with that came exposure to D1 schools. It all kind of fell in place.”

Mehlenbacher, who had a standout season for the Jr. Sabres with 38 goals and 68 points in 69 games, has five goals in 26 games for the Lumberjacks this season as one of the youngest players on the team.

He has showed well enough to attract interest from the likes of Cornell, Harvard, Miami of Ohio, Penn State and Boston University.

“I started getting more interest from schools. Over the course of the last year and talking with different schools, I found what schools I liked and what schools I didn’t like. I broke them all down and came to a decision,” Mehlenbacher said.

Mehlenbacher, who attended Lakeshore Catholic High School in Port Colborne, feels Wisconsin is a perfect fit for him, on and off the ice.

“I did a lot of research on each of the campuses and Wisconsin has the program I want to take and are really highly ranked,” said Mehlenbacher, who is enrolled in a bachelor of science program with the hopes of becoming a chiropractor. “They have a great campus, right between two lakes. It’s so awesome.”

“I’m so excited. It’s a great school and their coach went back to his roots and is trying to develop the program and win a national championship,” Mehlenbacher said. “I can’t wait to be part of that.”

Mehlenbacher had to make his choice without seeing the schools in person due to the COVID-19 pandemic.

“I stayed in my room and did virtual calls and tours,” he said. “I tried to get a relationship with the coach and see who he is as a person without actually being there to talk to him. Each school sent videos on facilities and campus life. The schools and the coaches did their due diligence to help me as much as they could.”

The Lumberjacks are about halfway through the USHL season and Mehlenbacher admits it was a tough adjustment being away from home at first.

“It’s been hard, I went from August to Dec. 20 without seeing my family,” he said. “That was the hardest part. Other than that, we have a great team atmosphere. The coaches are always here for us and I have a great billet family.”

One of Mehlenbacher’s teammates with the Lumberjacks is Niagara IceDogs import draft selection Daniil Gushchin, who is second on the team in scoring with 17 goals and 39 points in 28 games.

Mehlenbacher feels one more season at the USHL level will have him ready to make the jump to the NCAA.

“Having that time to develop as a person and develop my skills this summer to get stronger and then jump into the USHL season next year, I hopefully will be able to use my skill set to dominate the league and then be ready to go,” he said. “Hopefully it won’t be too much of a difference from USHL to college. I will be a lot more prepared and understand the jump I will have to make.”

Mehlenbacher is grateful to be playing hockey at all — he said there were a few positive COVID tests on his team early in the season but none recently.