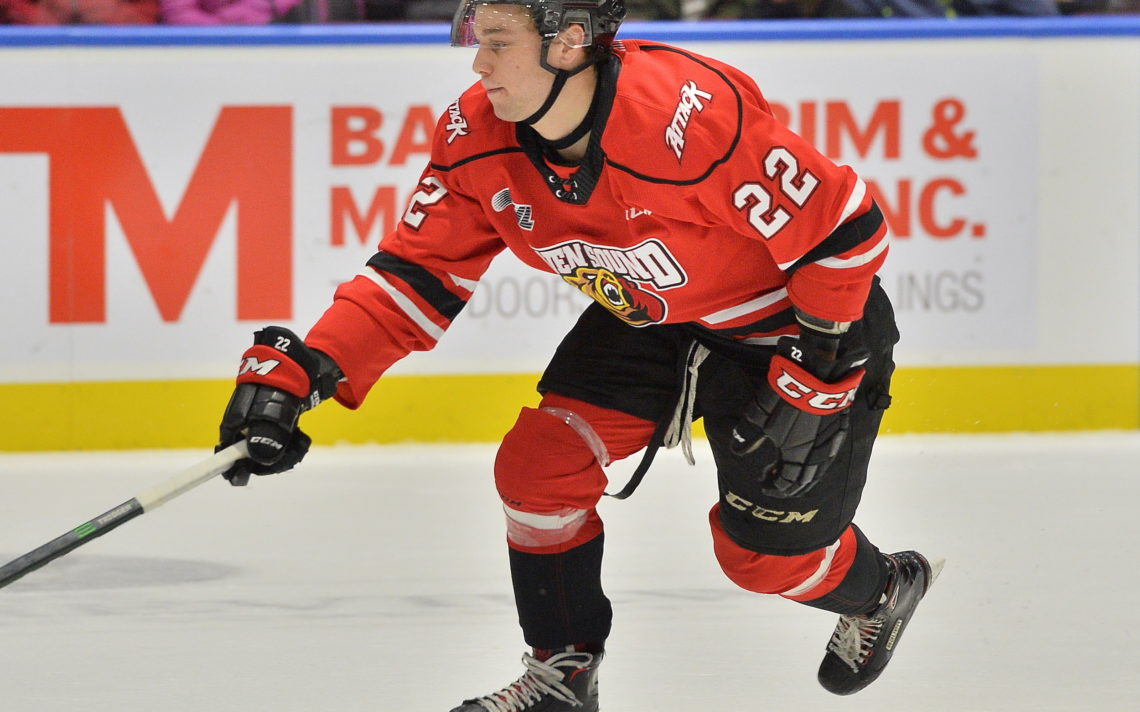 The COVID-19 pandemic couldn’t have come at a worse time for Adam McMaster.

The 20-year-old Beamsville native was in the midst of his best season in the Ontario Hockey League with the Owen Sound Attack when the OHL was forced to shut down last March.

The league has been idle since as the pandemic continues to wreak havoc with sports leagues all over the world.

“It’s definitely a trying time for all of us,” McMaster said. “We’ve been home since March or early April and we continue to be home. Some guys went overseas and it’s a little frustrating for us.

“We just want to get going and get back at it.”

McMaster, who had accumulated 19 goals and 42 points in 60 games before the shut down, was hoping for a quick resolution to the situation.

“At the start of it, not knowing too much, from my understanding I was going back up to Owen Sound in two to three weeks for the playoffs and to compete for a championship,” he said. “When the season was cancelled, then I kind of knew we would be pushed back the next year. I didn’t think we would start on time. I kind of prepared myself for that but I didn’t think it would take until the end of January, to be honest.”

McMaster kept himself busy in the summer months golfing almost every day, working out, and skating with a group led by Erie Otters assistant coach and Niagara Falls native Wes Wolfe.

“It was good,” McMaster said of the ice time. “It ranged from OHL players to ECHL and a couple of AHL players. They were good skates. It was competitive with lots of battle drills. It’s all good fun and the guys were pushing each other to get better.”

McMaster was a first-round selection of North Bay in 2016 but never quite hit his stride offensively with the Battalion. He was dealt to Owen Sound midway through the 2018/19 season.

“The fresh start felt really good,” he said. “I walked in there and everyone met me with open arms from ownership down. Everyone introduced themselves. It was great. It cleared my head and made me become more of the player I wanted to be and let me do some more things more freely.”

McMaster also enjoyed his time in Owen Sound away from the rink.

“I fell in love with the city. It reminded me a lot of home. It’s really small and there’s not much to do. They really love their hockey and sell out every game so that was a plus.”

McMaster feels his offensive numbers could have been even better last season if not for some terrible luck around the net.

“As I got older, my production went up each year but honestly I just had to stop hitting the post,” he said. “I think last year — I can’t even count how many posts I hit the whole year— but the one game against Mississauga I scored one goal and hit six posts. It was just crazy. It was just staying positive and not get frustrated at myself because I would just get really angry but eventually they found a way to go in.”

McMaster had planned to return for his overage season this year.

“I’m still hanging on to a little bit of hope but it definitely has crossed my mind that we might not even play this year,” he said. “It would be unfortunate for guys like myself, the OA guys to hopefully have a big year and sign a contract, but it is what it is and you have to deal with the circumstances.

“You can’t really do anything and last year even got cancelled early. Playoffs is a big part of when players come to play so it’s a little bit different.”

McMaster has looked into playing at the university level next season and isn’t closing the door on turning pro if the right offer comes along.

“I haven’t made a decision yet,” he said. “I’ll see what happens and what are the options.”