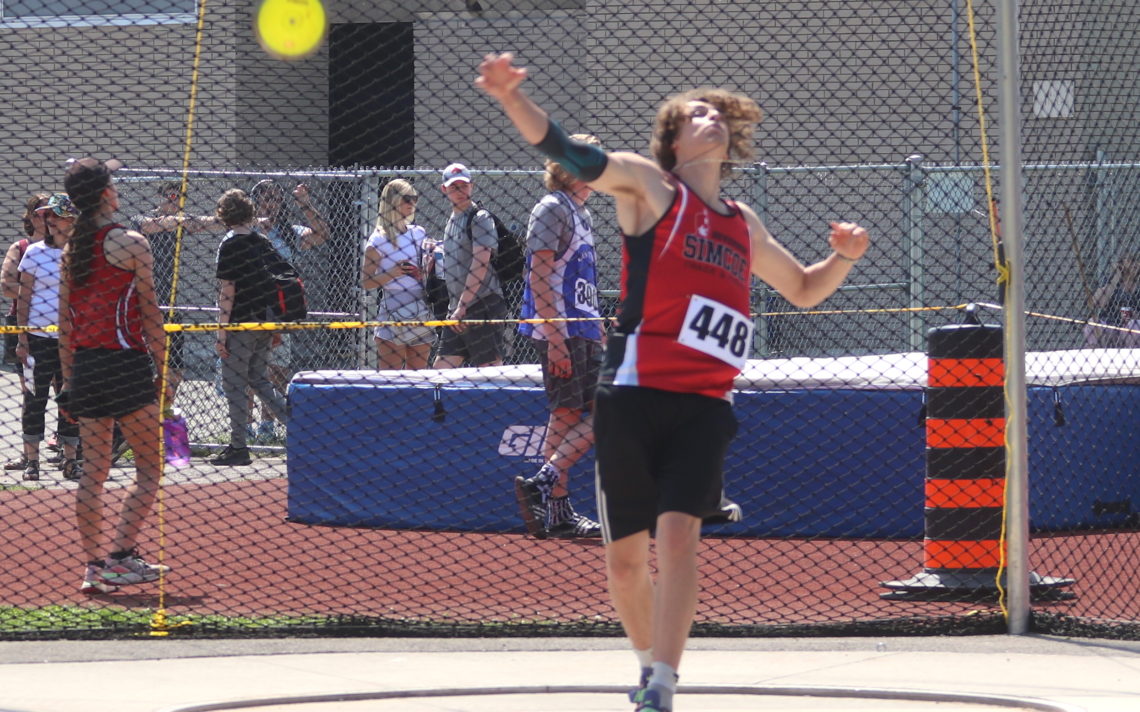 The Grade 12 student at Governor Simcoe won the senior boys discus and javelin by more than 10 metres each as he makes the most of the end of his pandemic-abbreviated high school track and field career. He threw 49.82 metres in the javelin and 40.6 metres in the discus.

The 17-year-old Niagara Olympic Club member would love to finish his career with a bang.

“I want to get at least one OFSAA (Ontario Federation of School Athletic Associations championships) medal and get my banner up at the school. My school has banners for OFSAA winners around the gym and we have pictures on the wall for SOSSA (Southern Ontario Secondary Schools Association championships) winners as well.”

He would also love to get the chance to represent Ontario at the Canada Summer Games this August in Niagara.

He needs a throw of 52 metres to qualify for the provincial trials.

“It is the Canada Summer Games and it is my last year and I want to be able to go as far as I can. After Grade 12, I am going into the trades (carpentry) next year and it is time to grow up.”

There is also a little matter of trying to make up a little bit of ground on his older sister Emma, who won OFSAA gold in javelin in Grade 9 and bronze in Grade 10.

To achieve those goals, McDougall has been working hard.

“I have been training almost every day and doing workouts at home by myself on my free time without my dad (NOC coach Randy McDougall). I am making sure my strength and endurance is good and that I am ready to compete.”

The video game aficionado combines his love for the games, Valorant and Counter-Strike Global Offensive, with training for field events.

When high school spring sports were lasted contested in 2019, McDougall didn’t do well in javelin because he dislocated some ribs and broke an ankle prior to the high school season. He did perform well in discus, going into OFSAA ranked 17th and finished fifth in the novice boys division.

Like all track and field athletes, McDougall was devastated to lose two high school seasons to the pandemic.

“It was so painful because I was so motivated coming out of Grade 9 for javelin because I didn’t make it to OFSAA for javelin and it is my favourite event,” he said. “I was so excited to do it and just before the season started (in 2020) COVID happened. “I was like ‘Come on!’ and then I lost another year in Grade 11. If I was able to throw then, I think I would have made it to OFSAA too.”

It wasn’t easy to deal with but he managed to get through the tough times,

“My dad helped me a lot and I was motivated to work out with him all the time every Tuesday, Thursday and Saturday after track practice. I got really far in benching and dead lifts.”

Randy is a big fan of his son.

“What I love about Tristan is even when he is leading a field he is very unassuming. He tries to help his competition and give them pointers. He loves the competition and remembers when he was the one needing help,” he said. “Not only will he go far in sports if he wants, but he will go far in anything he decides to do.”

Ending his track and field career wasn’t an easy choice for Tristan to make.

“It wasn’t but I have been doing track since I was three or four and I am kind of burnt out,” he said.