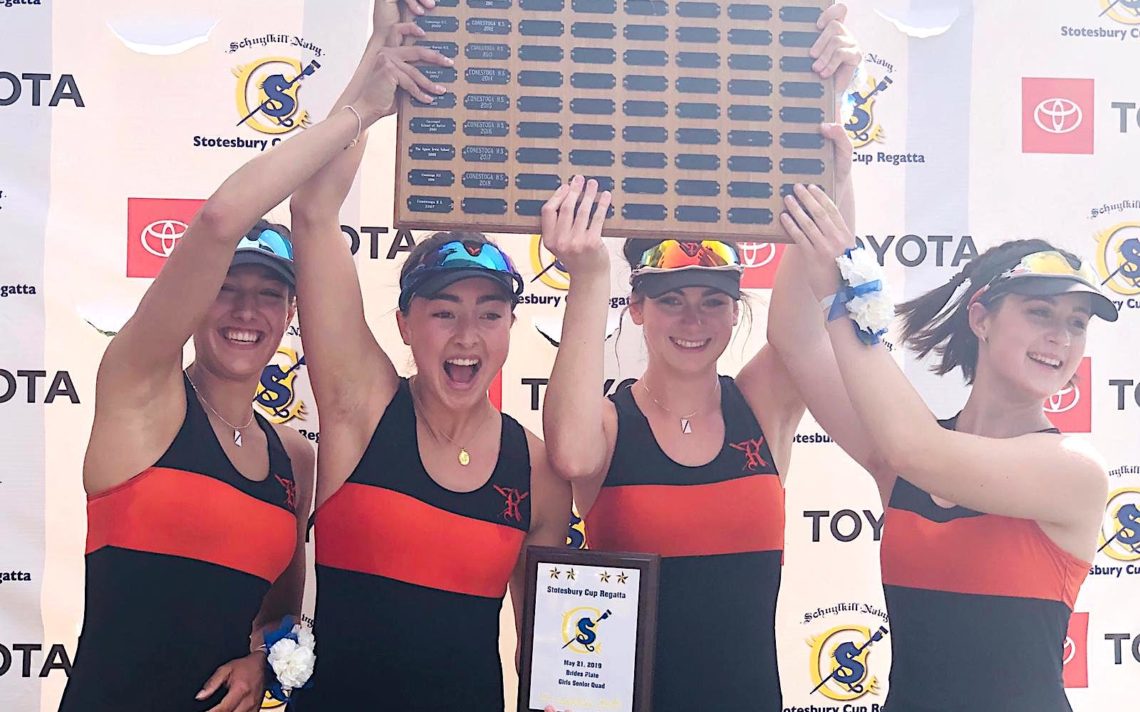 The Ridley College senior women’s quad came together at the right time.

Charlotte Drennan, Alexandra Cook, Erin Broski and Gabrielle Cook put it together over the weekend at the Stotesbury Cup Regatta in Philadelphia where they took home gold.

“It took a lot of time and we’re still working on it,” Drennan said.

The crew has been together on the water since March.

Drennan said the crew started slowly in the race before cruising to an easy victory.

“From the start, it was really close for about 500 metres,” she said. “We didn’t know where we were and then all of a sudden, something just clicked and we moved on them and we won by quite a bit.

“We honestly knew (we were going to win) the last 10 strokes. We had the biggest smiles on our faces and threw our arms up and celebrated and hugged each other. We were so pumped and so happy.”

The crew wasn’t really sure what to expect heading into the race.

“We went in with an open mindset and executed our race plan. We knew what we could do and really went through with that.”

The crew is now preparing for the Canadian Secondary School Rowing Association Regatta which begins May 31.

“I think it’s a good gauge for what the competition is going to be like (at CSSRA) but it’s not exactly the same,” Drennan said. “You never know what you’re going to get at every regatta. Each one is different but we’re pretty confident.”

Coach Siobhan McLaughlin was naturally proud of her crew.

Following the CSSRA, the crew will head to the Women’s Henley in England in June.

“We were planning to do it,” McLaughlin said. “We wanted to see along the way we had the boat speed so that was conformation for us that we are in the hunt.”

Three crews travelled to Philadelphia to participate in the Stotesbury Cup Regatta,  the largest high school regatta in North America.  The team’s priority race categories were not the same as the categories at this regatta.  Therefore, in all cases the boys had to race competition of a higher category.  All crews raced a high-quality time trial making it onto the semifinals.  Unfortunately, all three boats were eliminated and did not go onto the finals.

“The racing presented valuable experience that will help our team in preparation for the CSSRA National Championships,” coach Dereck Schwandt said.

The team also had seven crews race in Welland this past weekend.  A significant portion of the team raced on Sunday after racing in Philadelphia on Friday and Saturday.

“The boys rose to the occasion and executed high level performances.  Most notable performance was the boys senior 66 kg quad that row an exceptional race,”  Schwandt said.

The First Girls Rugby team completed their league schedule Wednesday with two league games at home. With the team already having qualified for the championship day and playoffs, Ridley came out somewhat flat against two of the other top teams in the league.

Ridley fell 10-0 to Appleby College and also struggled to finish off strong drives against the Trinity College Bears, falling 17-5 in that contest. The team did manage to complete some great scouting as they prepare to face these same teams (along with Hillfield Strathallan College) in the Championship Day games on Wednesday at Country Day School.

In addition, a number of exhibition games were also scheduled with many players who had not seen the competition field on a regular basis having the opportunity to engage in some 7’s action.

The boys and girls senior badminton team travelled to Oakville Wednesday for a conference match-up with Appleby College. Despite falling 9-2, the Tigers challenged Appleby to some lengthy rallies at each of the different flights.

Doubles action was the most exciting of the afternoon as the Ridley No.1 boys pairing of Alex Blanchard (junior) and Max Blanchard (senior) combined excellent rotational play with well-placed half-court shots to earn a convincing 2-0 (21-8, 21-12) match victory.

The Varsity Boys 7s rugby squad closed out their CISAA League play with a perfect 9-0 record, going undefeated in the last two tournaments of the regular season.

The Tigers traveled to Hillfield Strathallan College to compete in the Trojan’s Homecoming tournament.

The Tigers were able to sweep the field, defeating Rousseau Lake College in a resounding 46-0 victory. Finnish rookie Pertuu Iso-Kuortti led the try scoring with four and freshman rookie Emmanuel Orim closed out the game with his first try of his promising Ridley career.

In the final game of the day, Ridley took on the host team from HSC.  Despite some aggressive play from the Trojans, and a lapse in discipline from the Tigers resulting in four first-half penalties, the Tigers converted some solid defence into four unanswered tries and won the match with a convincing 24-0 final result.

Four days later, the Tigers traveled to St. Michael’s College School in Toronto for the final regular season games of the CISAA competition.  Despite missing many of their senior leaders due to exam season at Ridley, the Tigers rolled on to three victories versus Lakefield College School, Greenwood College School and the host St. Mike’s. Veterans and rookies alike stepped up to deliver some inspiring and courageous leadership in the face of a reduced line up.

Rahul Wahlia, Jimmy Wright, Alula Hilawe and Kiano Heath led the Tigers to easy victory in the first two games, scoring a total of eleven tries, and conceding one.

Ridley faced an undefeated St. Mike’s team in the final game of the afternoon. Despite great odds versus an indomitable opponent, the Tigers stood toe to toe and ended the first half down 7-0.  With a thirst for victory, the Tigers roared into the second half with a break away try by rookie phenom, Todun Akinyelure.

With the Tigers restart, Pertuu Iso-Kuortti gathered the loose ball in St. Mike’s territory, and with some beautiful two versus one passing with Rylee Hlusiak, the Tigers scored in the corner to take the lead 10-7.  On the ensuing kickoff, Alula Hilawe kicked a perfectly placed ball near the far touch line for  Hlusiak who scampered 45 metres for his second try of the game to put the Tigers up 15-7.  On the last play of the game, St. Mikes scored a break away try, and added a conversion, but fell short in their comeback, losing to Ridley 15-14, despite the Tiger’s handicap.

The Tigers seek to defend their 2018 CISAA title and add to their CAIS gold medal at this Wednesday’s championship tournament hosted at Ridley College.

“It was a good performance against a quality soccer academy team. Vincent Kenn de Balinthazy had a good outing on defence with well-timed tackles and strong organization,”  coach Jesse Vasquez said.