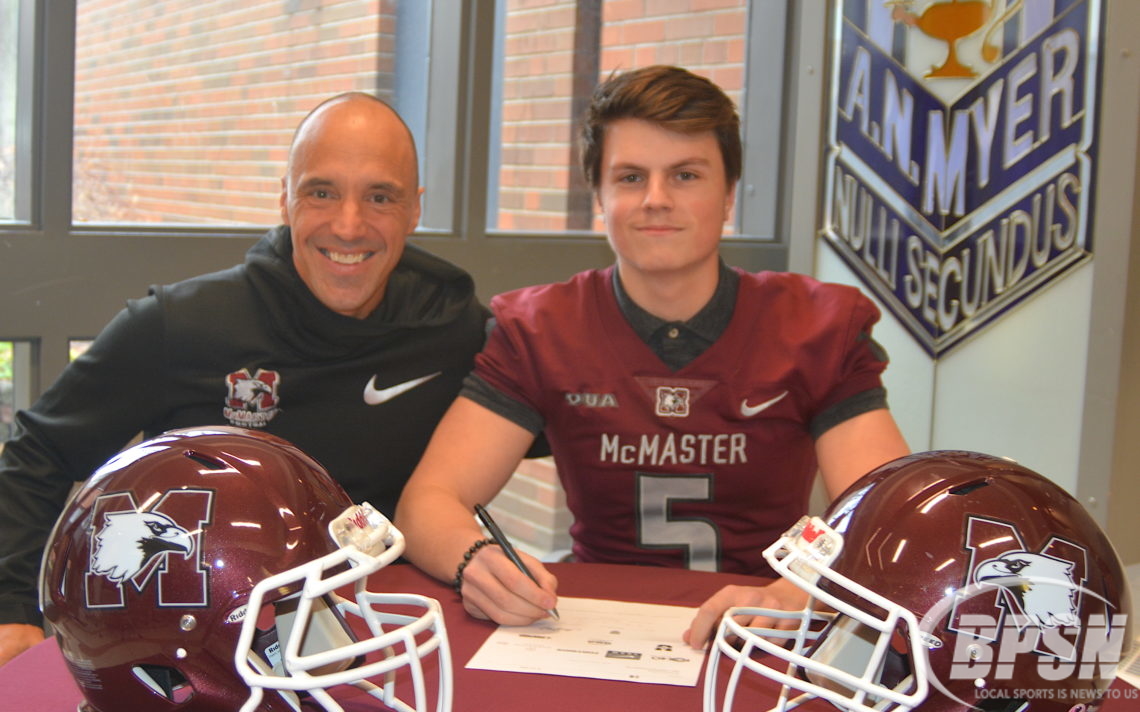 Putting his name on the dotted line on this occasion was middle linebacker Chris Bechkos, the co-defensive MVP of the Niagara Region High School Athletic Association’s Tier 1 Division.

“My recruiting guy has been all over this community for several years but I watched him for his senior season,” McMaster head coach Stefan Ptaszek said.

Ptaszek loved what he saw from the six foot, 185-pound player.

“He is a heady football player and it is a great football program that he is coming from,” he said. “He has been well coached and Niagara football is second to none in Ontario and around this country and he tracks well on every level. 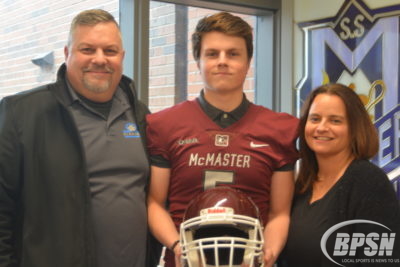 “He is a good student and he will be a positive impact on our entire campus.”

The 17-year-old has only recently garnered the attention of university football scouts.

“It was towards the start of this regular season when they approached me and that was my first look from a university,” Bechkos said.

But it wasn’t his last. He also had interest from Guelph, Windsor and Toronto, but McMaster quickly became the frontrunner for his services.

“It was mainly the coaches,” he said. “I like how they carried themselves and how they approached me.”

He has been playing football since Grade 6, but the Grade 12 student has never played travel ball. He suited up at the house league level and with A.N. Myer. This spring, he is thinking about trying out for the Niagara Spears.

Bechkos feels he took another step in his football development this past season.

“I think it was my overall awareness of the defence and my football smarts to understand the playbook, the plays and everything that happens on the field.” 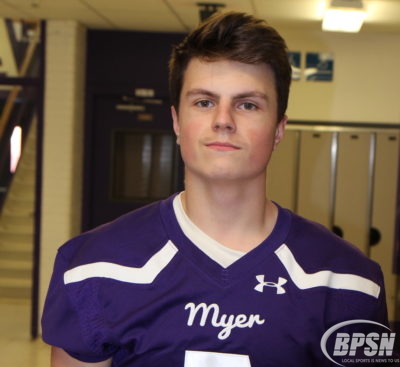 “He is a real smart player and a good team leader who reads the game well,” he said. “He is still young in his football life because he has played a bit of minor but he hasn’t played travel football yet. He has a big upside.”

Bechkos also excels off the field.

“Academically he’s really sound and he’s a good kid. I think he is going to do really well there,” Buchanan said. “They have a great coaching staff at McMaster.”

Bechkos knows he has a lot of work ahead of him.

“I am definitely going to work out a lot because I need to get a lot bigger for post secondary and I am going to keep working on everything.”

His goals for the 2020 season are simple.

“It’s to dress and maybe get in on special teams or defence.”

“He is a good football player and we think he is going to help our defence very early in his career,” he said. “We think on special teams he is going to be an impact player if all goes well in his first year.”

“That SAM linebacker spot is one of the hardest positions on the field to play but any of the linebacking and secondary stuff he can do,” Ptaszek said. “He’s physical but he needs to adjust to the size and speed of 22-year-old men, but he will and when he does we will be excited to watch him.”

Wherever football takes him, Bechkos will enjoy the ride.

“I just love the sport and my dad (Jim) is a big football guy,” he said. “I like the team aspect and the brotherhood part of it.”