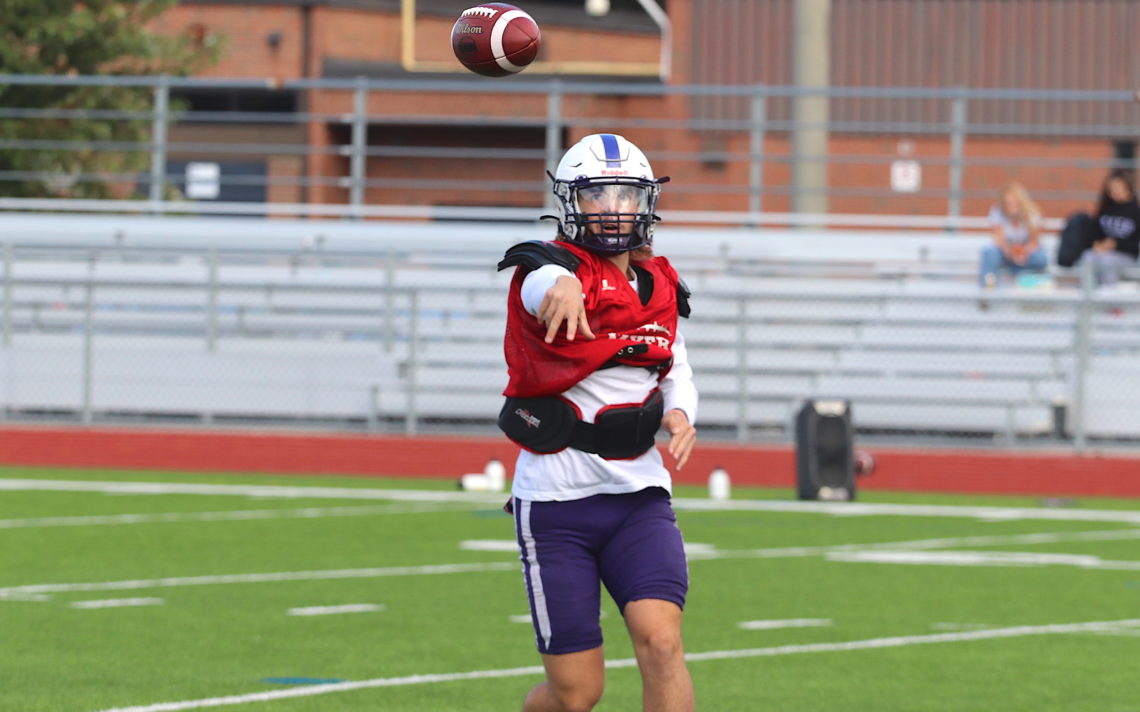 Marauders focus on present, not past: Eden tops Thorold

The 18-year-old Somerville picked up a football for the first time in Grade 9 and started at quarterback for Myer’s junior team in Grade 10. He was the backup for the senior team in 2019, starting and winning a game that year.

“He wasn’t ready then but what he is now compared to then, he is a totally different player,” Myer head coach Dave Buchanan said. “He has worked tremendously hard in his off-season training. He is committed totally to the sport, to the QB position and he has changed quite a bit from a young Grade 9 to a kid who is leading the team and is focused. He has done well in school and we are expecting him to probably go somewhere.”

The six foot 185-pound quarterback said there is no secret to his success.

“I just kept learning and getting better,” he said. “A few years ago, I didn’t understand the game as well as I do now mentally. I got bigger and faster and more consistent throwing the ball but the biggest thing was getting in the classroom, learning about the game, understanding how to read defences and understanding tendencies and coverages so when I get on the field it just becomes easy.”

As soon as he stepped on the field for a game this season, Somerville noticed a big difference in his play.

“There is not a moment out there where I don’t know where I am going with the ball. It seems like the game has slowed down because I know more about what is going on on the field.”

He is hoping to play at the next level and has already had conversations with a few Ontario University Athletics’ scouts.

“I have to keep being consistent and learning every single day. The most important thing right now is going out every Thursday and Friday and performing.”

Somerville would have loved to have shown what he could have done in his Grade 12 year but the COVID-19 pandemic had other ideas.

“We worked so hard in the off-season expecting that we were going to have a season and then there was nothing,” he said. “It was more motivation to keep working and to keep getting better for this season and my 12B year.”

Buchanan describes his team as being in pretty good shape at this point in the season.

“We didn’t know what to expect going into this year but we are pretty focused and we’re not trying to get too far ahead our ourselves,” he said. “We know there are some competent, competitive teams in our league so it’s week by week. They are just happy to play.”

Buchanan and his team are focused on the present and not the past.

Buchanan doesn’t think that is an issue with this year’s version of the Marauders.

“We have had enough of those years where you can’t take things for granted and I don’t think this group will,” he said. “The (Grade) 12s lost in their junior year to Westlane in the junior final and some of the other kids were part of the team that lost our last game at senior against Notre Dame.”

There’s no secret to turning it around in November.

“It’s don’t over-think it, just be yourselves and don’t worry about losing,” Buchanan said. “And that goes for the coaching staff too. We can’t care about that stuff. It just got so hyped up. We know that we are not guaranteed to be the winner and I don’t particularly think we are the favourite. And that’s OK.”

“I know what they have on that team as far as players and I know that the coaching staff is strong. Coach (Donnie) Marshall is there running the offence and he has obviously played at a high level and knows more football than I would know.”

Myer has already faced a few tests this season.

“We are excited that the games are good and some of the scores weren’t indicative of the game. Fort Erie played tough against us and Westlane’s defence was fantastic. A few breaks here and there offensively for them and it is a different game,” Buchanan said. “Slowly but surely our league has gotten stronger and it is going to give us the challenges that we need. We are going week to week and hopefully we can get to a championship game and from there it is not going to be easy.”

Myer was leading Centennial 28-0 halfway through the second quarter last Friday when inclement weather put a halt to the proceedings.

It has been decided that the game will not be continued and the Marauders have been credited with the win.

“It was a tough night to execute, but the boys managed to do what they had to do to put some points on the board,” Buchanan said. “The defence played really well just like they have up to this point.”

Playing good games for the Marauders were: Arden Martinez who was all over the field on defence and had a 40-yard punt return for a major; Tyler Goforth with a 35-yard TD run; Evan Goforth with a 50-yard TD catch and run; Mitch Cassuci with a 35-yard TD run; the defence which applied solid pressure up front and saw the defensive backs take away outside throws and runs; and, the special teams coverage led by Connor McEachern.

The Eden Flyers varsity football team improved to 2-1 in NRHSAA senior action with a 50-13 victory over the Thorold Golden Eagles (0-3).

Eden built a 28-13 lead by halftime and then shut out the Golden Eagles in the second half.

“We played well and the defence got stronger as the game went on,” Eden coach Jeff Webster said. “Quarterback Sam Miele had a strong game spreading the ball around to five different receivers and had two passing touchdowns.”

Also contributing to the win for Eden were: Ogo Ogunkeye with four receptions for more than 100 yards and a TD; running back Elijah Prosper with two touchdowns; Nigel Hurd and Martin Owekka who led the team in tackles; and,  defensive lineman Tanner Loranger who had a strong game.

For Thorold: Lucas Friesen had three receptions for 79 yards and 2 TDs; Eric Bussi had four catches for 90 yards; Blake Sider had one catch for 20 yards; Mark Suntz was 10-18 for 210 yards and threw for two TDs; Lucas Smith recorded an interception; Aiden Clarke and Michael Sarfo had sacks; and, Gabe Badoui kicked a convert.

Thorold is at Westlane Thursday at 7 p.m. and Eden plays at Welland Centennial (2-1) Thursday at 3 p.m.