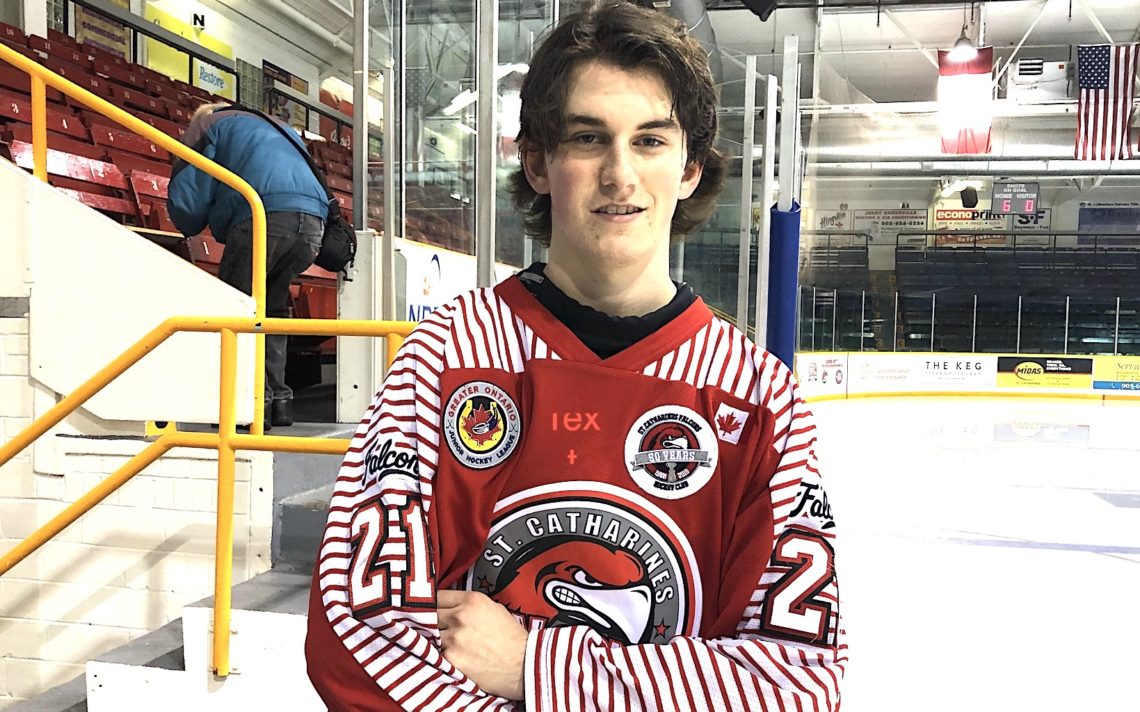 Tanner Main is a Falcon once again.

The 20-year-old Welland native, who left St. Catharines two years ago to pursue his dream of playing NCAA hockey, recently signed his letter of intent to play hockey for the Bentley University Falcons next season following two years in the British Columbia Hockey League.

“I started talking to Bentley in March just before COVID hit last year,” Main said. “It happened pretty quickly. I was fortunate enough to get an offer before COVID came around. With the uncertainty surrounding COVID, it was nice to get that out of the way.

“I was really excited to seal the deal and make it official.”

Main was drawn to Bentley after one of his former teammates with the Wenatchee Wild signed with the Division 1 school last season.

“If I had any questions about the school I talked to him about it,” Main said. “I wasn’t able to visit because of COVID but I did a virtual tour. I did all my research on line.”

Main, who indicated he received an athletic scholarship to help defer costs at the business school, left the Falcons and signed with the Wild for the 2019-20 season.

“It (NCAA) was kind of my goal after my second year in junior B. I didn’t really know where I wanted to go in my hockey career. I was always interested in the BCHL so I did a little research,” Main said.

Main collected two goals and 19 points in his first season out west and admitted it was a big adjustment.

“It was tough at first,” he said. “I worked hard to get there. The jump from junior B to junior A, especially the BCHL, it was a lot faster and you had to make quicker decisions.

Main feels the experience will help him on and off the ice heading forward.

“I think that’s the big thing in my mindset when I was taking a couple of years off school, to give me some time to mature and develop,” he said. “Last year, I was ready to move across the country. I felt I was mature enough to do it on my own and now when I go to university, if there is any adversity or problems, I will be able to handle it.”

Main was dealt from the Wild to the Prince George Spruce Kings for this season but the COVID pandemic and a leg injury have kept him off the ice.

“I was playing a pre-season game and went into the boards kind of weird and fractured my fibula,” he said. “I was home for a couple of months and just came back a couple of weeks ago to start up and play.

“I was fortunate not to miss much but it hasn’t been a good year, for sure.”

Main should get a chance to see action this season as the BCHL has recently been clearly to return to play.

“There are five pods cities. We will be in a hotel for five weeks and isolated and no fans,” Main said.

Main is eager to see how his skillset transfers to the next level.

“They (Bentley) liked my style of game,” Main said. “Obviously, I’m a little bit of a smaller defenceman but I have good hockey IQ and can skate with the puck. The biggest jump will be the size and it’s more of a men’s game in college.

“I plan to have a big off season and put some strength and weight on and should be ready to go when the time comes.”

Main, who also played lacrosse at the junior B level until a couple of years ago, has fond memories of his time in St. Catharines.

“It was awesome,” he said. “My first year I had a lot of older guys who played junior A so I learned a lot from them and then my second year I had a bigger role with the team and had a really good time.

“It led me to where I am today as a player and a person.”