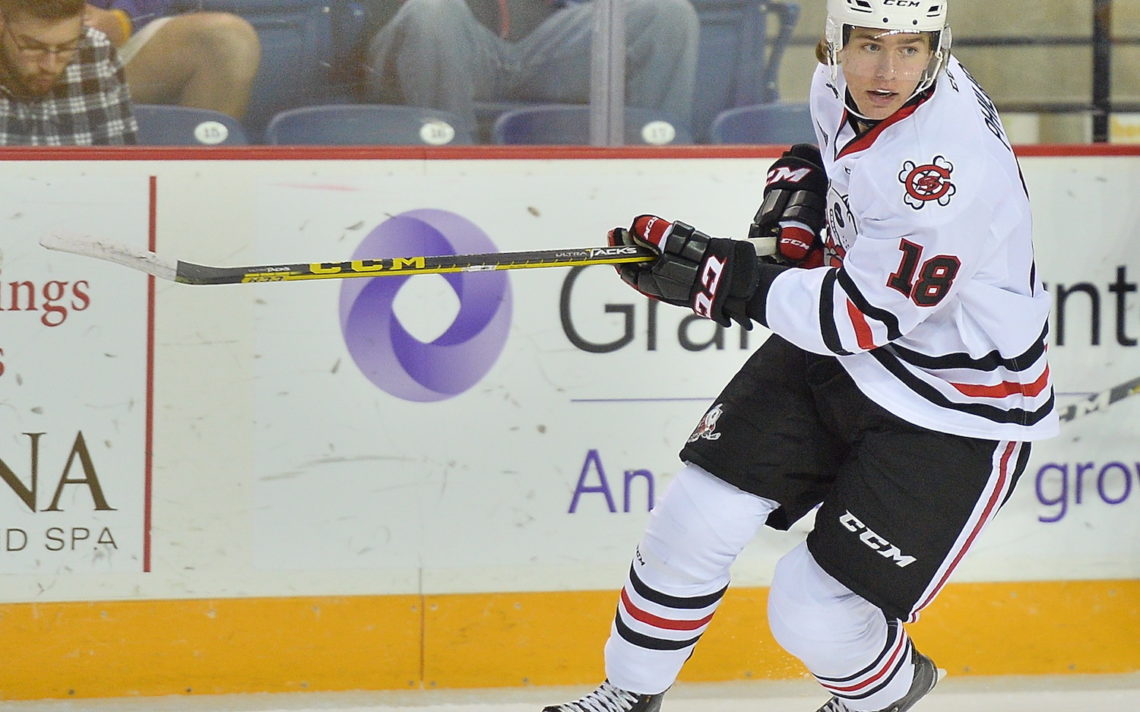 Less is more for speedy winger

The shortest distance between two points is a straight line, but it’s also the key to success for Matthew Philip.

The Niagara IceDogs forward is one of the smoothest and fastest skaters on the team, but it’s how he uses that talent that can be the difference between a mediocre effort and an impactful game.

Philip got off to a slow start this season, but over the last couple of months has turned his game up a notch.

“The big turnaround for him was when he starting being less swingy and (skating) more in a straight line,” Burke said. “He’s a great skater with big speed.”

The IceDogs also shifted Philip from centre to the wing which allows him to use his speed down the boards.

“He’s one of our best forwards at utilizing chip and chase,” Burke added. “If he feels any type of pressure in the neutral zone he’ll chip it off the walls and go get it. He’s able to generate some offence through that. He’s stopping more in front of the offensive net and he’s gotten a lot more simple.

“He’s playing on the inside, he’s using his assists and going to the net more. His battle level has risen and he’s getting rewarded for his hard work.”

Philip doesn’t feel his game has changed that much from the start of the season, although his production has increased.

“At the start of the season, I had a slow couple of games and then I talked with the coaches and my teammates helped me out,” the 18-year-old London native said. “I’m just trying to push myself to get better every game, really.

“It’s been coming. I’ve not done anything special.”

Philip, who was drafted in the ninth round of the 2015 OHL Priority Selection, spent his first season of junior hockey at the junior B level with Lambton Shores and St.Marys before joining the IceDogs as a 17-year-old rookie last season. With 13 goals and 29 points so far he has already exceeded his production from last year and could crack the 20-goal barrier.

“He definitely has the ability to score some goals for us,” Burke said. “He has a great shot and good hands around the net. You definitely need that to take the pressure off (the leading scorers) and get a complementary guys beneath them. It provides a great balance for us. He’s scored some big goals for us over the last couple of months.”

Philip admits scoring goals is no easy task at the OHL level.

“I don’t think I’ve had one clear-shot goal all season,” he said. “They’re all in front of the net and you really have to battle for those goals. Obviously the natural goal scorers can get some nice goals, but even them, they are on the ice practising every day working on their shot just to try and get better.”

Philip has marvelled at newcomer Sam Miletic, who has sniped almost at will since being picked up from the London Knights at the trade deadline.

“We were doing OK, but that extra goal scoring to give us the lead or whatever has really helped us a lot. When we found out we all thought this was it, we’re taking the next step. We all looked each other and said it was time to buy in.”

The IceDogs sit in first place in the Central division with a 26-14-2-3 mark, two points up on the Barrie Colts. They are coming off a productive weekend which saw them take five of a possible six points.

Philip loves the atmosphere that comes with the expectation of winning.

“It’s a lot more fun,” he said.  Winning is exciting. The fans in St. Catharines, if you’re losing they let you know, but if you’re winning they are behind us all the way.

“It was awesome last year to make it in the playoffs but now we’re in first and we have a chance to stay there and move far into the playoffs. It’s exciting going to the rink every day.”

The IceDogs are in Oshawa Friday, Kingston Saturday and Kitchener next Tuesday before returning home next Thursday to face the high-powered Sault Ste. Marie Greyhounds. A tough stretch of game to be sure, and Burke said the coaching staff is mindful of the team playing so many road games.

“You definitely need to monitor some things. One thing we’ve done this year that’s been different from the past is more days off for the players,” he said.

The idea came at the suggestion of associate coach Ted Dent, who has coached at the American League level.

“There is the grind of the season and it’s no different than our league,” Burke said. “So far, we’ve been finding if we can give the guys extra days off here and there it’s paying off. They’re more energetic and we can keep our energy levels up.”