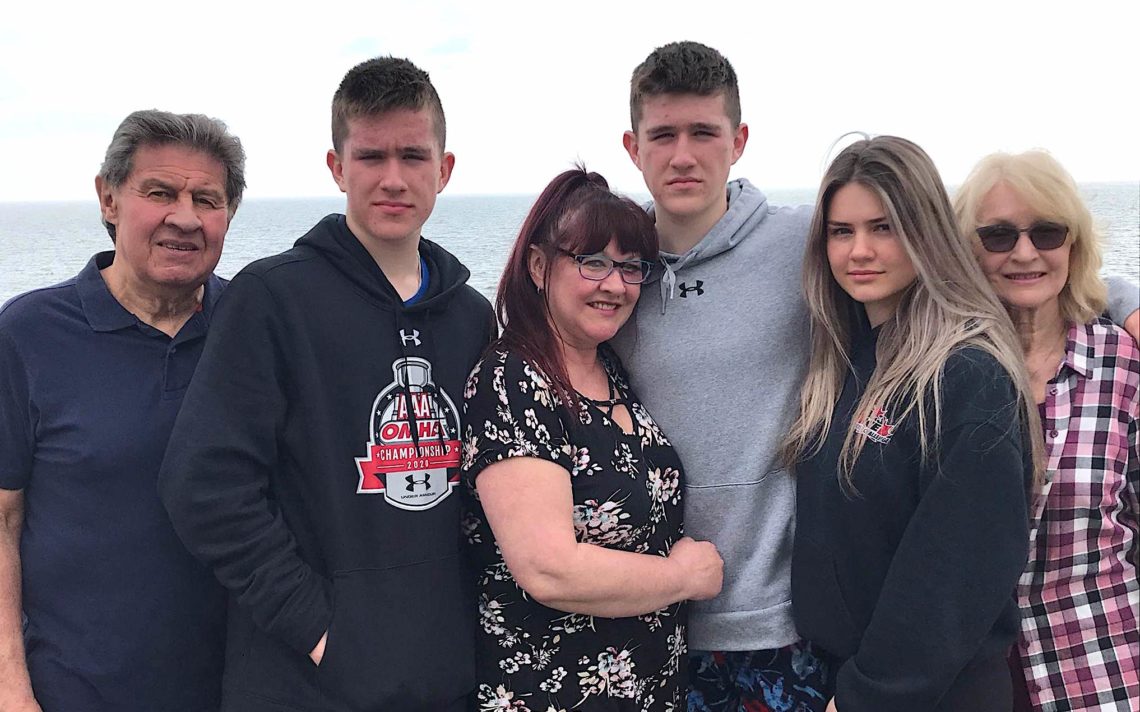 LeBlancs get OHL wish to play on same team

Andrew and Jacob LeBlanc are pictured with their family after the OHL draft. From left to right are grandfather Attila Nagy, Andrew, mother Sheila, Jacob, sister Kiara and grandmother Susan Nagy.

Heading into the OHL draft, the 15-year-old twin brothers from Port Colborne had told all the teams that they were a package deal and wanted to stay together.

The Kitchener Rangers did just that, selecting centre Andrew 17th overall in the first round and then picking defenceman Jacob 42nd overall with the second pick of the third round. Kitchener did not have a second-round-pick.

Andrew received a call from the Rangers just as his name appeared on the OHL website.

“It was pretty cool,” he said. “I was hoping a team would pick me in the first round and a couple of teams showed interest in me, but I didn’t want to get my hopes up because I wasn’t sure where I would go.

“I always hoped I would get my name called by Kitchener because they are such a great organization. It’s really an honour.”

It was a nervous wait to hear his name called.

“We were all sitting there anxious because it was taking a lot of time,” Andrew said. “It was all quiet in our house and when we heard my name called, we jumped up and we were all really happy.”

In his phone conversation with the Rangers, he was welcomed to the team.

“I want to make an impact right away,” Andrew said. “I know being a rookie that it is going to be hard but I have to get my confidence up to play the best I can and help the team out.”

He was thrilled to be going to Kitchener with his brother and Southern Tier lineman Trent Swick, who was selected in the third round, 47th overall.

“It is awesome to be able to go down there with my brother and my teammate Trent Swick,” he said. “That was pretty cool as well.”

Andrew had one word to describe how the LeBlanc family would celebrate later Saturday.

“We feel Andrew has elite hockey sense, he’s extremely skilled, he’s an offensive player and we really liked his game all year,” he said, in an interview on the Rangers’ website. “We think he is going to be a great player for us and we are really excited to have him.

“You will see the skill level and the hockey sense, and he has great vision, great puck protection but he has a bit of grit to his game too.”

“He is not afraid to play physical and he is a nice blend of skill with some grit and work ethic as well.”

Andrew had 25 goals and 68 points to lead the Southern Tier Admirals in scoring during the regular season.

The 5-foot-11, 156-pound forward was spotlighted in the OHL draft guide with the following writeup.

“Andrew is a skilled centre that drove his team all season. He led the SCTA in points and was a threat each and every time he was on the ice. He continued to demonstrate elite offensive skills and instincts, and has a great understanding of how to create time and space for himself and his teammates. He is a very good skater with good separation, speed and balance. He is very good on the power play and especially good on the half wall at distributing the puck.”

Jacob also saw his name appear on the OHL draft website at the same time as the team called him.

“It was stressful just waiting and hoping that I would get picked by the same team as my brother,” he said.”We were waiting anxiously and when my name was finally called, the whole family was here and we jumped up with excitement. Everyone was happy.”

Playing on the same team as his brother was crucial for Jacob, even if it hurt where the brothers were selected in the draft.

“We have been together our whole career and we thought it would be most beneficial for us and for our family so they don’t have to drive to two different places to watch us,” the Grade 10 student at Lakeshore Catholic said. “We thought if we could stay together we could perform the best because it is something we are used to.”

The twins have a strong connection.

“We have spent every second of our lives together,” he said. “We don’t really feel what the other is feeling, but we know each other well.”

Jacob is ready for the next challenge in his hockey career.

Jacob had five goals and 27 points in 32 games for the Admirals and the 5-foot-11, 158-pound defender was also spotlighted in the OHL draft guide with the following writeup.

“Jacob is a solid two-way defender that seemed to gain confidence with the puck as the season went on. His confidence was evident as he joined the rush more and more and wasn’t afraid to carry the puck up ice at the right times. He is very good in his own end and uses his skating and hockey smarts to defend, making good use of his body positioning and also using his stick well. He competes hard for loose pucks and in front of the net. He quarterbacked one of the best power plays in minor midget and makes very good pass-shot decisions with the puck. He played big minutes and was a big reason behind the success his team had.”