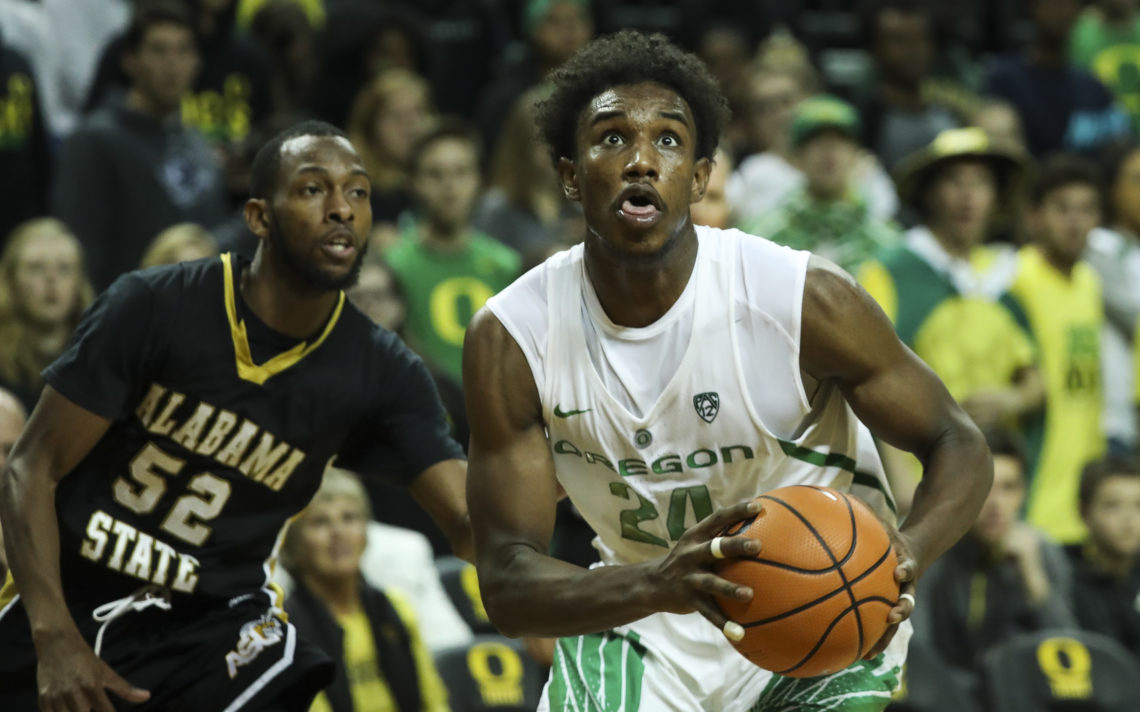 Abu Kigab has been named the 2017 St. Catharines athlete of the year. Photos special to BPSN by OREGON ATHLETIC COMMUNICATIONS.

Abu Kigab was blown away upon hearing the news he had been selected as the 2017 St. Catharines athlete of the year.

His mom, Mashair El Gaide, received a letter in the mail about the award and called her son immediately.

“It’s surreal and if someone told me when I was growing up that I would be athlete of the year, I would never have believed them.”

Kigab was a slam dunk choice for the award after helping the Canadian under-19 men’s team defeat Italy 79-60 in early July to capture a FIBA gold medal. He was an important piece of the puzzle, earning tournament all-star honours after averaging 14.7 points and 10.6 rebounds per game. The 6-foot-7, 215-pound small forward had a strong game to help Canada shock the United States 99-87 in the semifinals of the FIBA under-19 tournament.

Memories of that tournament still linger today for Kigab.

“It was definitely a big deal and it was our first one in international play,” St. Francis alumnus said. “I am always thinking about it and it was a great win.”

His gold medal is under the care of his mother.

“She takes care of all the awards,” he said. “It’s obviously my biggest accomplishment in basketball, but there is a lot more to come.”

The worlds gold medal was the first at any level for Canadian basketball teams.

Kigab’s first season of NCAA Division 1 basketball with the Oregon Ducks ended on the weekend. He had two points and two rebounds in six minutes of playing time as Oregon opened the NIT (National Invitation Tournament) with a 99-86 win over Rider and then had two rebounds in seven minutes in a season-ending 101-92 loss to Marquette.

“Freshman year is always tough when you are not playing a lot and getting accustomed to the system and the lifestyle,” he said. “It was a tough year and I didn’t play as much as I would have liked to, but it happens and I will be ready for next year.

“Hopefully I will bounce back and have a huge NCAA season.”

Kigab has played major minutes everywhere he has been, including at Prolific Prep in Napa, Calif., and not playing was his biggest adjustment.

“Coming from high school and always playing and with Canada and always playing, I wasn’t accustomed to having a smaller role,” he said. “After a while, you have to accept it and do what I needed to do for my team to win.

“Once I got that in my head, it was pretty easy after that.”

He feels he has made significant improvements in his game since arriving at Oregon.

“I have improved a lot on the mental side and on the court,” he said. “I realized there were so many parts to the game and college really opened my eyes to see the game a lot differently.”

He is fully aware of what he needs to do to take the next step in his basketball progression.

“I have to continue working on my shooting, getting to the basket and making the right play,” he said. “I have to keep it simple.”

“Playing Arizona was my favourite moment because I know a lot of the guys on that team and I wanted to beat them as much as they wanted to beat us,” he said. “It was a lot of fun.”

With the season over, Kigab and his teammates will get a week or two break to prepare for their exams. The school’s spring break is also on the horizon.

“Most of the guys stay in the gym so it’s not really time off,” he said.

Kigab is studying business administration at Oregon and he has made a smooth transition into becoming a student/athlete.

“It wasn’t as hard as I thought it would be,” he said. “High school prepared me pretty well for the transition.”

He isn’t sure what his plans are for the summer, but he plans to make it home to St. Catharines at some point.

He would have loved to come home for the award presentation Monday night at city hall, but his schedule made that impossible. His mother was the perfect choice to accept the award on his behalf.

“She has been driving me all over the place and taking me everywhere and she has helped me a lot,” Kigab said. “I owe a lot to her.”