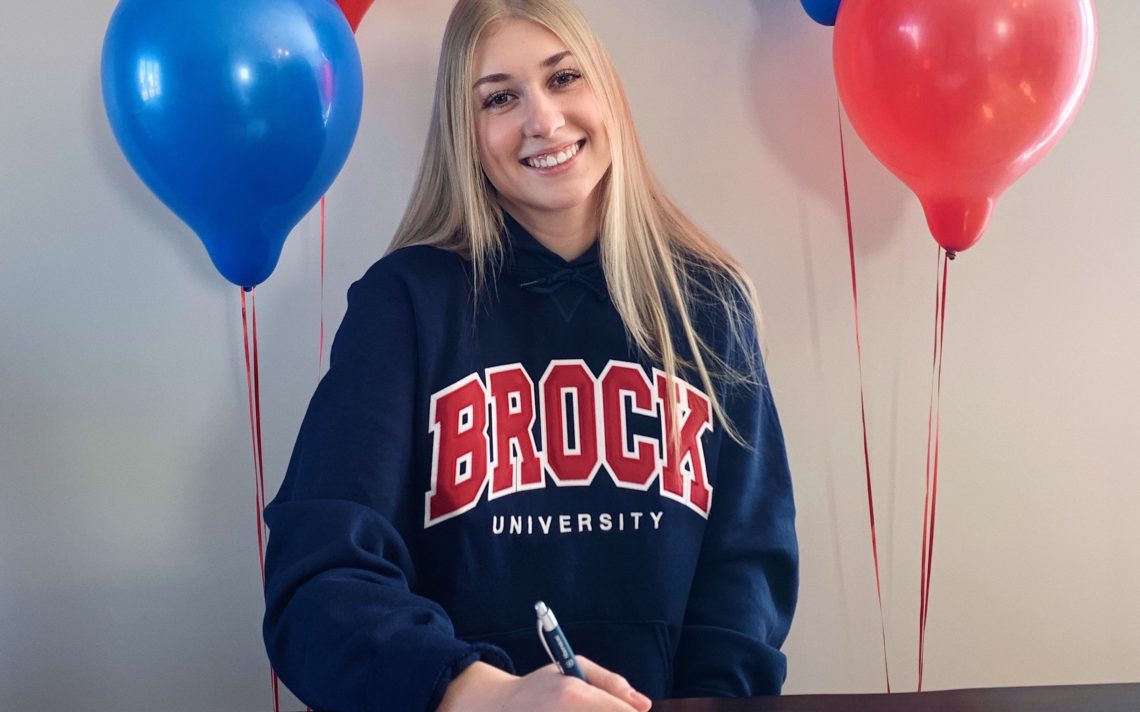 The COVID 19 pandemic has thrown a wrench into the recruiting process for many of Niagara’s best and brightest athletes across the sporting spectrum.

Grade 12 Centennial student Kaylie Wright, a member of the Halton Hurricanes 18U volleyball team, was thankfully unaffected by the COVID Curse.

“Luckily for me, Steve Delaney who is the coach at Brock, used to coach with the Hurricanes and I had an opportunity to be in the gym with him a few times,” the 17-year-old Welland native said. “He kind of knew how I played.”

That connection recently saw the six-foot middle sign to play for the Badgers.

“Obviously I have been in communication with their coaches and I have known her for more than this year,” Delaney said. “We haven’t been able to recruit in person and I am kind of going by what I have seen in the gym from them before.”

He clearly liked what he saw.

“She lives in the region which is obviously something we like and she offers something at the middle position. She is strong at hitting what we call the step around or the slide,” Delaney said. “That is something my current middles are working on and she is going to come in with a better ability to do that as a rookie than the middles we currently have. She is going to add a piece for our training and give us an extra dimension we are looking for when we are running our middle attack behind the setter.”

Wright, who first became interested in volleyball at age 11 when she was playing at Glendale Public School, had Brock as her preferred volleyball destination right from the start.

“It was my first choice for academics because I am going for concurrent education and they have one of the top teaching programs,” she said. “Even if I didn’t go there for volleyball, I was definitely going to go there for school.

“It all worked our because I am able to pursue the academics and get the athletics out of it too.”

Wright thought she had a chance to play volleyball at the next level after joining the Halton Hurricanes travel program.

“Their whole program is really focused on trying to develop players to play at the past secondary level and I realized then that this could be a real possibility for me.”

“I am excited to play and compete again because I haven’t been able to in a long time. I want to gain as much experience as I can playing at such a high level, I want to learn from the older players around the team and develop new knowledge and skills from the coaches.”

She is most looking forward to meeting her teammates and making friends.

“I have already had some of them reach out to me and they have made me feel so welcome. I am excited to be on the team and get to play with them.”

Playing university ball will be a step up for Wright.

“There is always a big transition when you go from club to university because now you are playing against girls who are older than you,” Delaney said. “They (Wright and other rookies) are going to realize that they might have had things their way at the club level and always been on one of the top teams but now it gets a lot harder and the demands are harder.”

Wright is ready for that challenge.

“I am not a huge middle — I am only six feet — so I have to be more strategic with my game and be smarter about where I am putting the ball and reading the game better.”

Wright was practising three times a week with Halton until the province locked down again.

“I’m a super bored and it sucks that I am not able to go into the gym to play and work out too.”

She ended up buying some workout equipment to train at home and has been following workouts provided by Halton.