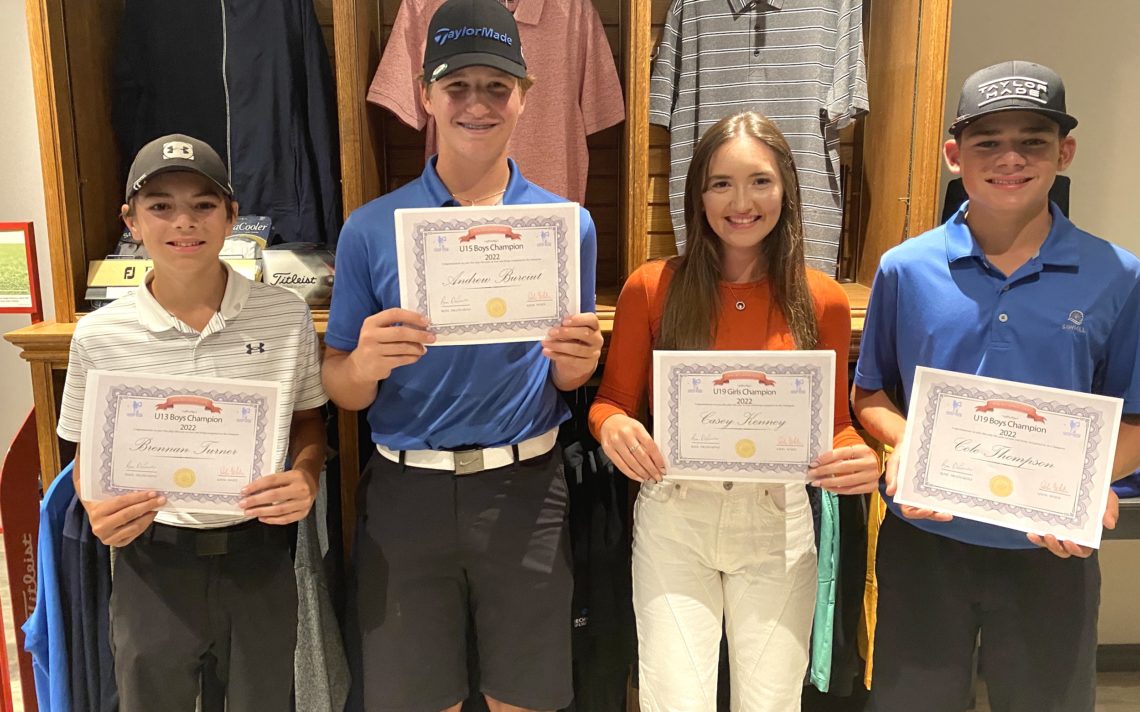 Brennan Turner (U13 boys), Andrew Burciul (U15 boys), Casey Kenney (U19 girls) and Cole Thompson (U19 boys) were honoured Monday at Beechwood as the Niagara District Junior Golf Tour wrapped up its 30 season. Photo by: BILL POTRECZ.

It’s hard to imagine Brennan Turner having a better season than what he accomplished this summer on the Niagara District Junior Golf Tour.

The 12-year-old Wellington Heights Public School student was perfect, winning all nine tour stops to capture the overall points championship in the U13 boys division.

The Peninsula Lakes golfer kept his streak intact and ended the season on a high note shooting a 75 to win the final tour stop Monday at Beechwood.

“After not having a very good round here last year it felt good to shoot a good round today,” Turner said.

Turner didn’t think about the streak until late in the tour.

“Either on the seventh or eighth tournament when I started playing really good,” said Turner, who cited driving and putting as his strengths.

Turner, who began playing at “two or three” said he took to the game quickly.

“I was always pretty decent for my age and then this year I started playing really well,” he said.

“It feels pretty good because I came second last year so it felt really good this year,” Burciul said.

Burciul admitted he was thinking about the title after seeing Sawmill golfers sweep all four divisions last season.

“There’s a lot of pressure,” he said. “You have to be good with 25 players on this tour. It sets the example for Sawmill.”

Burciul tied for ninth with a 91 Monday.

“I hit a long ball but my short game is not the best but I’ve really been working on that this year and sometimes succeeding,” he said. “I’m planning to work a lot on my iron and wedge game.”

Cole Thompson, 15-year-old Blessed Trinity student from Beamsville, won a pair of tour stops to place first atop the U19 overall points standings.

“I didn’t really think about it but I noticed I was in the lead that past two tournaments,” said Thompson, who finished tied for seventh with an 83 Monday.

Thomson said there is still work to be done on his game.

“I’m in a little bit of a slump right now. I’m not playing as good as I could but at the start of the year I was doing pretty well and that’s what helped me get a lot of points and the lead. It was pretty consistent,” he said.

Thompson just wrapped up his third year on the tour.

“I would have loved to win it. That was my goal but (also) to do as good as I could and improve as much as I could,” he said.

“Obviously, I wanted to win but it was hard to compete with last year because I was six for six. I wanted to keep up with that, which would have been really hard to do,” she said. “I didn’t really, but I did it enough.

“Obviously, this year didn’t compare to last year. I started off pretty rough but I’ve been shooting lower and lower in each round.”

Kenney won Monday’s stop with an 77.

Kenney enjoyed battling with Kowalyshyn on the tour.

“I love Sierra. She gave me a run for my money this year. She’s a good player and she’s young too,” Kenney said.

Following the final stop at Beechwood, players were treated to a banquet and awards night.

Among the highlights: Players raising $10,906 for the Kristen French Child Advocacy Centre of Niagara. Burciul was the leading fund raiser with $1,295.

The best left-hander of the year award was given to Cole Thompson.

The Sportsperson of the Year presented by Niagara College was Noah LeBrasseur.