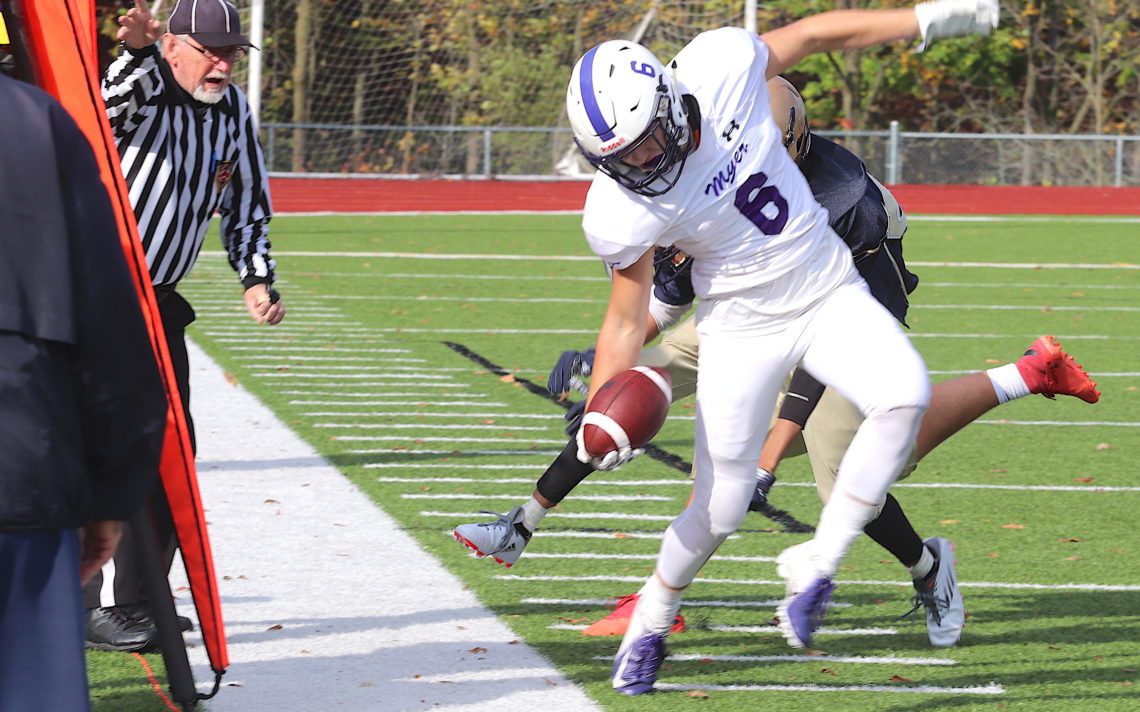 Somewhere in the musty and dusty cold room in the basement of my modest bungalow sits about 20 years of newspaper clippings detailing pretty much every senior high school football game played in Niagara since the early 1990s.

At one point, I thought I would go into my yellowed and fading archives and try and determine the exact last time the A.N. Myer Marauders lost a game in Niagara Region High School Athletic Association but since I am somewhat lazy and not quite sure where the two jam-packed boxes are located, I will simply rely on BPSN’s extensive (about 1,000 high school stories and counting) electronic archives which tell me the team last loss in public board play came late in the 2014 regular season.

Fuelled by the dynamic Ford brothers, Tre and Tyrell, and a host of other talented players, the Marauders captured three straight Ontario Federation of School Athletic Association Bowls in 2015, 2015 and 2016 and even without the Fords, the Marauders rolled into the 2017 Niagara Bowl against the Notre Dame Fighting Irish riding a 28-game winning streak.

Notre Dame head coach Tim Bisci used a BPSN headline highlighting that streak to motivate his squad, plus a little ancient history of his own on that Nov. 16 night in 2017.

“The last time we beat Myer in a championship game, I was the quarterback,” he said. “I know the date and the time and I mentioned Nov. 12, 1987 to them again and again.”

On that night, Niagara Catholic Athletic Association offensive MVP Brandon Graziano scored the winning TD with 37 seconds remaining to give his team a 20-14 victory.

“I’m not going to enjoy it very much and I know I didn’t enjoy it when we were getting our butts kicked,” Myer head coach Dave Buchanan said that night. “I don’t intend to ever go back there.”

Buchanan felt his team was overcome by the squad’s past triumphs and Myer player Christian Kuriata echoed those thoughts in an interview prior to the start of the 2018 season.

“Every week we were focusing on our ranking and we were worried about losing,” he said. “We were nervous about losing that winning culture and losing the record of straight victories, especially with all the doubters we had after the Fords left.”

Myer put together another unbeaten NRHSAA season in 2018 but witnessed more heartbreak Nov. 16, 2018, coughing up a 21-0 lead and losing 24-21 to the Saint Paul Patriots in the Niagara Bowl.

“I am trying to wrap my head around it right now,” Myer head coach Dave Buchanan said that night. “We got in a little trouble with penalties that stalled drives and gave them an opportunity to get back in the game. To their credit, they battled back, we held them back for a bit and had some opportunities, but didn’t take advantage.”

In a pre-season interview prior to the 2019 season, receiver Winfield Organ talked about his desire to go out a winner.

“It really motivates you because you hate this feeling of losing constantly (in the final),” he said. “You want to win and you get so close so this is our year to go all the way. I think the Saint Paul loss made so many of us want to stay back so we could win it for the school.”

After defeating a beat-up Churchill squad 52-0 in the NRHSAA final the Marauders were beaten 35-12 Nov. 14, 2019 by Notre Dame in the Niagara Bowl.

“We should have won the last two years and they were disappointed in that. They felt they let something get away that they shouldn’t have,” Buchanan said that night. “Going into this game, we felt we could win but by the end of the game, they were satisfied because they knew that they had played a really good team.”

Following the season lost to the COVID-19 pandemic, Buchanan and his squad returned to the field focused on charting its own destiny and not thinking about the past.

Buchanan didn’t think that was an issue with this year’s version of the Marauders.

“We have had enough of those years where you can’t take things for granted and I don’t think this group will,” he said. “The (Grade) 12s lost in their junior year to Westlane in the junior final and some of the other kids were part of the team that lost our last game at senior against Notre Dame.”

Buchanan continued to preach that message in November.

“It’s don’t over-think it, just be yourselves and don’t worry about losing. And that goes for the coaching staff too. We can’t care about that stuff. It just got so hyped up. We know that we are not guaranteed to be the winner and I don’t particularly think we are the favourite. And that’s OK.”

Myer advanced to Thursday’s Niagara Bowl (7 p.m. Thursday at Kiwanis Field) with a hard-fought 22-13 win over the Sir Winston Churchill Bulldogs. Their opponent, familiar foe Notre Dame, punched its ticket with a much-harder-than-it-sounds 30-8 triumph over Saint Paul in the NCAA final.

After the win, Bisci gave a brief scouting report on Myer.

“They are athletic and fast and they look good on the turf,” he said. “We are going to game plan them like we have done in the past. They are ranked third in the province in one poll so they have got to be doing something right.”

Who will win Thursday night? I have my prediction but I will keep it to myself rather than give some coach or player the opportunity to tell me how wrong I am. I get that enough from my kids.