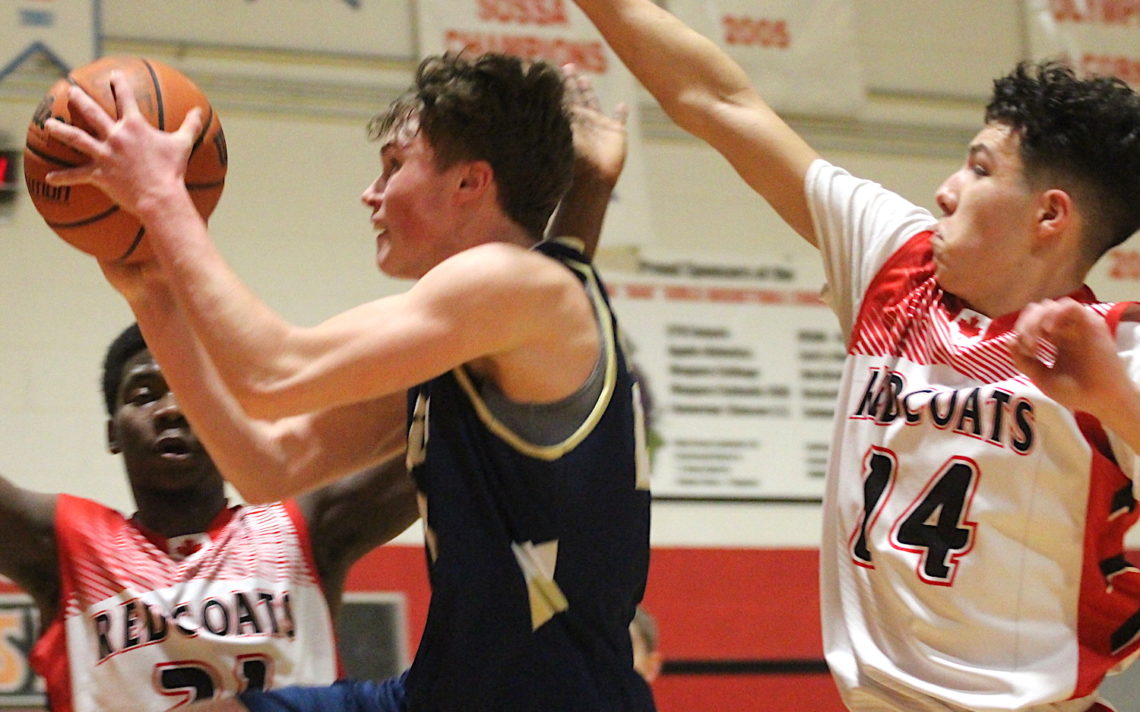 At the start of the season, David Jones questioned whether he wanted to play senior basketball for the Notre Dame Fighting Irish.

“I was hesitating about even playing senior because I didn’t know what my minutes would be and then I worked as hard as I could in practice. The coaches saw that and I’ve basically started all season,” said the 15-year-old Monday, after scoring 18 points to help the Irish defeat the Governor Simcoe Redcoats 67-58 in the Southern Ontario Secondary Schools Association AAA semifinals.

The 6-foot-1 guard has become an important piece of the Irish’s offence and defence.

“He’s a great, great athlete, he is so fast and the crazy thing about him is that the ball doesn’t slow him down,” Irish coach Mark Gallagher said. “He is really great at setting the tempo of the game.”

Jones is also an excellent defender.

“He’s a really tough kid and he defends,” Gallagher said.

And Monday, like many Notre Dame games this season, the Grade 10 player logged major and important minutes.

“In a game like this, it is all about defensive matchups,” Gallagher said.

“I take a lot of pride in my defence and ever since Grade 7 or 8, I have really worked on my defence,” he said. “I love to guard their best player and I take pride in that.

“Coach trusts me on defence and I feel that is the best part of my game.”

Jones wants to add even more to his game in the future.

“I definitely want to improve my shot because if I improve that, it would make it a lot harder for defences to guard me,” he said. “If I get my shot down, I think I could be a pretty good basketball player.”

“I am really happy with the way the boys came out this game,” Simcoe coach Shaun Feor-Spiece said. “We saw them in the Tribune semifinals and laid and egg there, but the boys laid out everything today.

“The season was on the line and you saw guys diving for loose balls, fighting for the basketball and digging deep on defence.”

After hitting many of their shots in the first half, the Redcoats were the unfortunate opposite in the second half.

“We have a shorter (bench) rotation so the guys kind of got tired and that affects your shot,” Feor-Spiece said.

For the Irish, it also was a tale of two halves.

“I thought they played really well in the first half and shot the ball well,” Gallagher said. “We thought we made their shots tough but they made them.

“Giving up 42 points in one half is too many and that is the first thing we talked about at halftime.”

The Denis Morris Reds senior basketball team saw its season come to a conclusion Monday with a 66-33 loss to the impressive Saltfleet Storm in SOSSA semifinal action at Governor Simcoe. 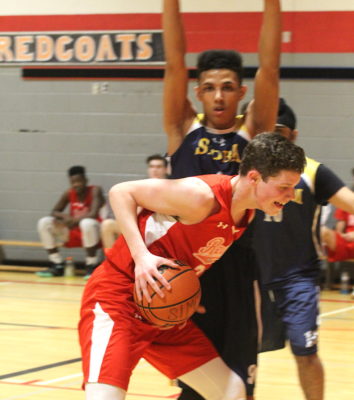 “It’s tough any time it’s your last game of the year but I told the guys that you don’t build a program in one season,” Reds head coach Randy Conlon said. “I’m not declaring championships or anything, but the future of Denis Morris basketball looks pretty good.”

The team is only losing one player to graduation and there’s a number of solid junior players who will be moving up to senior next season.

“We are building a program now and not just a team and I am in for the long haul,” Conlon said. “ 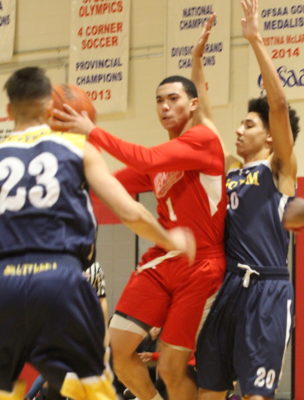 If Conlon is looking for a blueprint to follow, Saltfleet would be a good choice. The Storm played excellent unselfish basketball that stresses team play. Denis Morris is clearly a work in progress.

“We have to get a little more mature as a basketball team and age has nothing to do with maturity,” Conlon said. “We have to get more mature mentally in terms of when we get down because we are not very good at playing from behind.”

Saltlfeet, a quarter-finalist at last year’s Ontario Federation of School Athletic Associations championships, improved to 26-6 with the win.

BPSN Star of the Game: Governor Simcoe’s Rahim Bardi with 31 points, including 17 in the first quarter.

Up next: Notre Dame plays Saltfleet in the SOSSA AAA final Tuesday at 4 p.m. at Governor Simcoe.