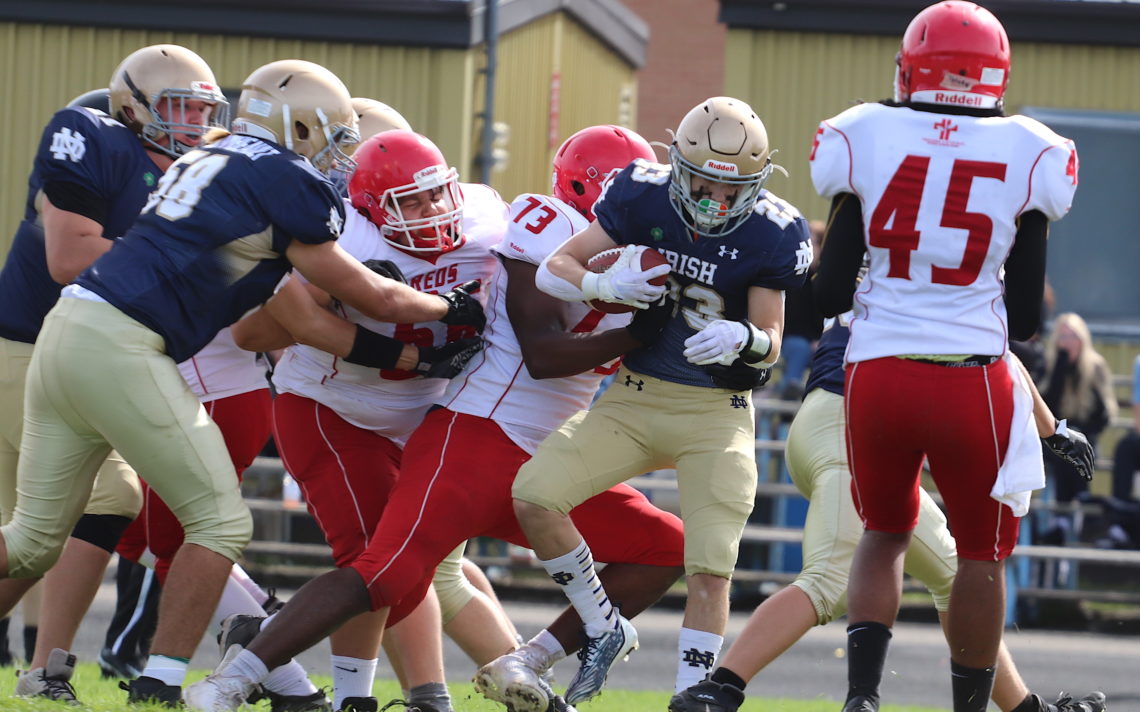 Notre Dame got off to a bit of a sluggish start in the game before it began to hit on all cylinders.

“We have been undisciplined,” Irish head coach Tim Bisci said. “We played Huron Heights, No. 1 in Canada, and we had a sequence where we caused a fumble on our two-yard line and ran it back for a touchdown and we got a penalty. We march it down and we score and we get another penalty. We get the ball back, score again and get nothing again from it.”

It was a case of deja vu for the Irish against the Reds as they had two touchdowns called back in the first quarter because of penalties.

“They were undisciplined penalties and against a really good squad it will cost us,” Bisci said. “We have to play more disciplined, we have to play harder and our mental game is really lacking right now. We need to address that.”

Bisci has a veteran-laden squad of 12 12Bs and one of his key fifth-year players is Adrian D’Gyves, who plays receiver and free safety. Friday, D’Gyves had a 45-yard TD reception.

“He is a great receiver and not to take away from his offence but where his value is is on defence. Last year, he was quarterbacking our defence from free safety and understanding it. It is invaluable to have a kid who can run the defence the way he does.”

And his offence isn’t too shabby either.

“When you go back to our OFSAA (Ontario Federation of School Athletic Associations bowl) game, he made some big-time catches on second and long where he got 15 yards. He had four or five of them like that that were just huge,” Bisci said. “He extends drives, he gets himself open and he makes big catches.”

It was an easy choice for the 18-year-old to come back for his 12B year.

“I really enjoy playing for this team. There’s great coaches and great teammates and it is a great atmosphere to be around. I thought why not come back for another year?”

Like his returning teammates, he would like one more go around at the province’s highest levels of football.

“One hundred per cent we want to win another OFSAA. We want to go back-to-back.”

The six-foot, 175-pounder feels this year’s team is different from the 2021 version.

“I think we are more hungry this year. We want it more because we got a taste of it last year.”

D’Gyves has no preference as to whether the plays offence or defence.

“I love playing both sides.”

He has no issues with being the quarterback on defence.

“I have to make sure the defence knows what it is doing and know what play we are running.”

It is a role he is comfortable in.

“I’ve been playing safety since my first year of football when I was 10 years old.”

Like Bisci, he wasn’t overly thrilled with his team’s performance Friday.

“We played well but we have a lot of stuff we need to work on on big sides of the ball, especially the flags.”

Despite the score, Denis Morris head coach Andy Cecchini saw a lot to like about his team’s play against one of the best teams in the province.

“I was very happy. We had a few goals that we were working towards,” he said. “We got the number of first downs that we wanted (five), we kept it positive on the sidelines and I think our boys had a lot of fun. Obviously the score isn’t what we wanted but it was good learning experience.”

The Reds celebrated a 23-yard field goal by Matteo Pingue like they had won the NCAA title.

“We got the zero off the board and that was one of our goals,” Cecchini said, with a smile.

His team also played hard from start to finish.

“We got everybody in and everybody got to play. They got to experience a game against Notre Dame.”