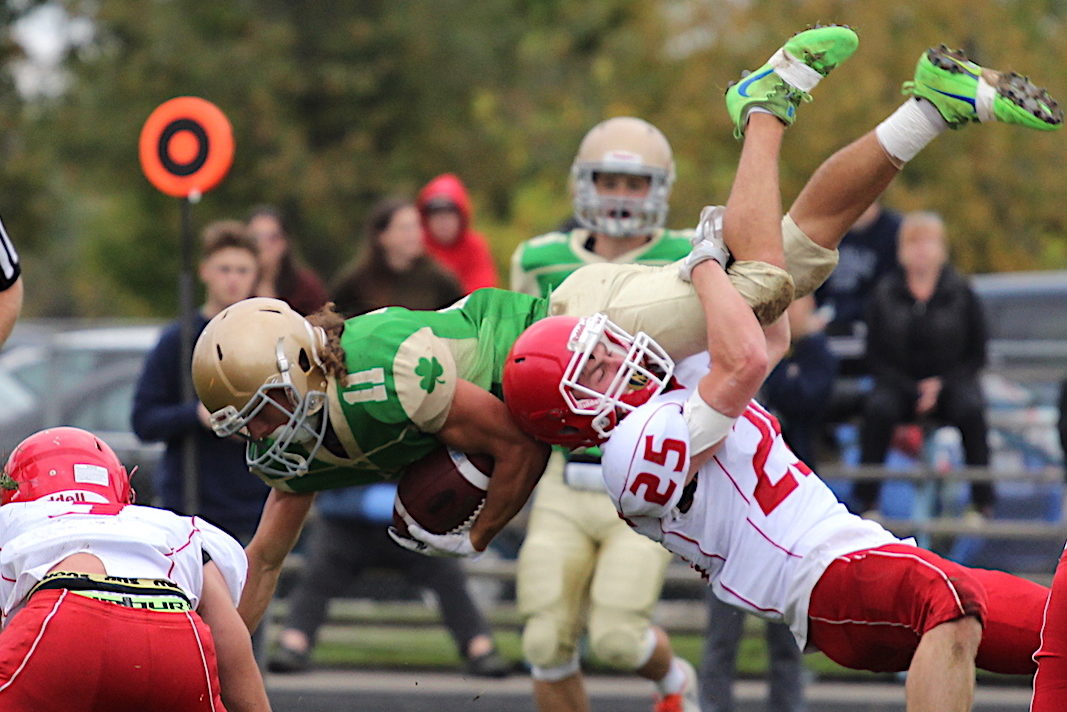 Notre Dame improved to 4-0 in NCAA senior football action with a 35-7 victory over the visiting Denis Morris Reds. Photo by BERNIE PUCHALSKI.

No one needed to remind the Notre Dame Fighting Irish senior football team that it had struggled through a number of lean years.

But Irish head coach Tim Bisci didn’t want his team to forget where it came from after Notre Dame defeated visiting Denis Morris 35-7 Friday to improve to 4-0 in Niagara Catholic Athletic Association play.

It was the first set of games featuring the top two teams in the North and South Divisions.

“It’s high school sports in general,” Bisci said. “You get a cycle where guys come out and they’re just not as athletic. This year we happened to get a lot of athletes.”

Notre Dame’s linemen are as athletic as its skill guys.

“We’re lucky all over the place,” Bisci said.

Notre Dame is also young, but Bisci isn’t counting on a prolonged run of excellence.

“It’s one of those things that nothing lasts 20 years and when you have this moment, enjoy it,” he said. “Enjoy it because you never know when it is coming back.”

It is that message Bisci is hammering home daily to his team.

“This is the moment they have played their whole lives for and they may never get another chance again.”

No one has to tell Irish quarterback Brandon Graziani to seize the day. The 18-year-old is in his third year at quarterback and has been on the wrong end of plenty of final scores.

“We struggled the first two years I was here, but we knew we had good guys coming up (from junior) and we knew we were going to be a good team,” the six foot, 175 pounder said. “We want to win a championship, especially after years of not having a very good team.”

Those lean years have provided plenty of motivation in 2017 and Graziani feels Notre Dame has what it takes to win a championship.

“We have a lot of athleticism on the team and a lot of people who have played football before which really helps,” he said. “We finally have a football-oriented team.”

And the leader is Graziani.

“We have been running the same basic offence for the last three years and he’s the guy that’s gotten it going,” Bisci said. “At the end of the day, your 12B kids are supposed to be your leaders and he’s stepping up every day.

Graziani feels he has improved his arm strength and his speed and feels he has an even better grasp of the team’s offence.

“I’ve been doing it for three years and I know when to pass and when to keep,” he said. “And my team keeps me motivated. I have great players helping me.”

For the defending NCAA champion Reds (2-2), it was one step forward and two steps backward as it has been at various times this season. They trailed 35-0 at the half and were never really in the game. The Irish rolled up 12 first downs and 311 yards of offence by half-time.

“They have a lot of team speed and our guys just didn’t react,” Denis Morris head coach Rob Battista said. “Again it is something else they have to learn.”

Battista preferred to dwell on the positive after Friday’s game.

“We got everybody in and gave them experience and hopefully we will come back stronger next week.”

He was impressed with the play of Notre Dame.

“They are a very good team,” Battista said. “They are loaded with team speed and size, they fire out well, they flow on defence and their DBs are very aggressive going for the ball.

“They are going to do well this year.”

Things won’t get any easier for the Reds next week. They will play the Saint Paul Patriots, the second-place team in the South Division. Saint Paul knocked Blessed Trinity from the unbeaten ranks Friday with a 10-7 triumph.

“We’re glad to be in this division and you only learn by playing the best teams,” Battista said.

For the Denis Morris Reds: James Holt, 60-yard punt return for a major and a sack; Jacob Barnowski, fumble recovery.