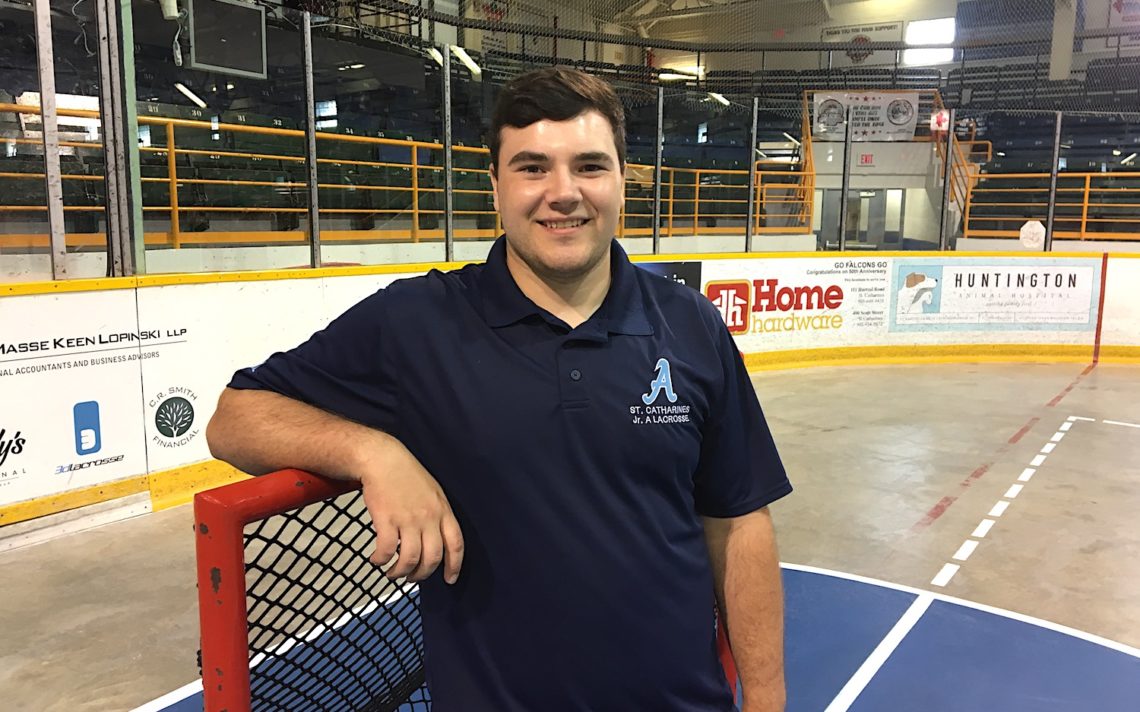 In the nick of time

Nick Damude tries to live most of his time as a goaltender in the future.

The 19-year-old Pelham resident has adopted the outlook to help him deal with the reality of the position by quickly being able put failure behind and turn the page.

“You have to focus and rebound and come back even better. You look at the best goalies in the NLL and they have bad games — everyone has bad games — but it’s always about the next one and coming out harder and better and learning from what you did wrong.”

Damude’s level-headed approach has helped him become a key component for the St. Catharines Athletics this season.

“Nick is a character kid who all the boys gravitate to,” Athletics general manager Jeff Chcoski said. “He is great in the dressing room and is always working on his craft.

“I can already tell he is a big game goalie.”

Damude is in his third season with the A’s after beginning his junior career at the junior B level with the St. Catharines Spartans.

“I think that’s one of the main reason I went to B was to gain that experience and get used to the bigger nets,” he said. “It was easy to transition to A after that year. I had a good goalie coach (Mickey Calder) and that really helped me out and taught me a lot.”

Like many goalkeepers, Damude stumbled upon the position almost by accident.

“I was at a novice tryout and I was trying out as a player and I don’t think I had a chance as a player,” he laughed. “Sean Allen said we needed a second goalie and I always wanted to play goalie so I shot my hand up.

“I told my dad and he just rolled his eyes at me!”

Damude immediately loved being the centre of attention on the floor, even if it meant having balls whiz by his head.

“I think I always loved it as a kid. I loved stopping the ball,” he said. “I love playing full games and getting lots of shots and being kind of the quarterback on the team.”

Damude played the first three games of the season for the A’s and has fashioned a solid 6.57 goals-against average.

“We tried to focus on one (goal) in five shots,” he said. “Anything below eight (goals against) you should be able to win. With the defence we have now, I think six is the goal this year.”

Damude loves what he sees of the A’s so far.

“I think we’re coming together more as a team. We’re trying to get the camaraderie going. We know we missed the playoffs last year and had a bad year.”

Damude, who has aspirations of playing at the pro level, has one more season of junior eligibility remaining and has some pretty big goals in mind.

“I think right now a championship, a Minto Cup, would be the ultimate dream, but I’m going to put my name in the draft and see what happens,” he said.

For that to happen, Damude is well aware he needs to at the top of his game.

“I definitely put a little but of weight on my shoulders (this year). It comes down to just play well and be consistent every game.”

He took the night off Wednesday and let Troy Holowchuk handle the goaltending duties as the A’s evened their record at 2-2 with a 14-7 win over the Peterborough Lakers at Jack Gatecliff Arena.

Brett Erskine led the offence with four goals and five assists while Jake McNabb and Carter Zavitz chipped in with four each and well. Kyler Kilgour and Alec Tamas added singles.

Holowchuk made 15 saves for the win.

The A’s are at Barrie Friday and home to Orangeville Saturday at 7 p.m.