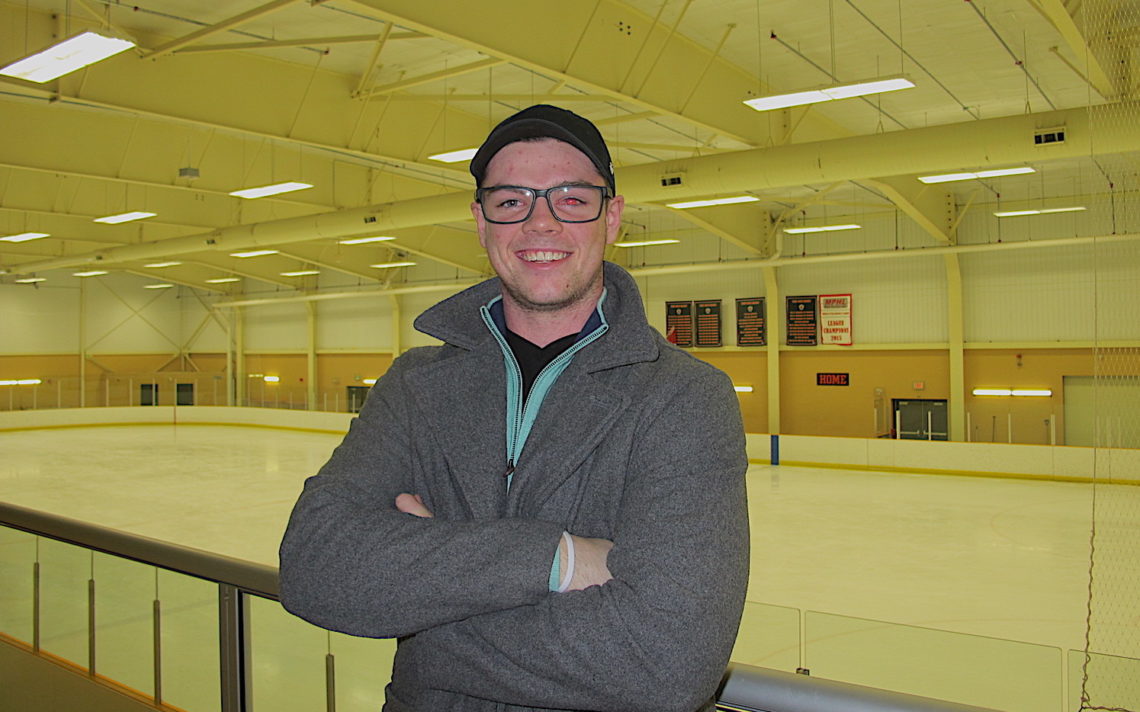 In the blink of an eye

Four years ago at age 16, the Ancaster native was diagnosed with type 1 diabetes and was required to go on an insulin pump to manage his blood sugar. It was a tough blow, but not enough to keep him from pursing his dream of playing hockey at the highest level possible.

MacDonald joined Ridley College and made a name for himself as a tough, gritty winger who could also put the puck in the net. Last season, he made the jump to the St. Catharines Falcons where he netted 32 points in 40 games and established himself as a legitimate junior hockey player.

The future looked bright on the ice with perhaps another few years of competitive hockey at the university level and a career in correctional services in the works off the ice.

But on March 22, 2017, disaster struck and MacDonald’s life would forever be changed.

The speedy winger was chasing down a member of the Niagara Falls Canucks during a Golden Horseshoe playoff game when he was struck in the eye with a stick under his visor.

“I dropped to my knees. I knew right away something was wrong,” MacDonald remembered.

He was transported to hospital in Niagara Falls where it was quickly determined emergency surgery was needed. So MacDonald was put back in an ambulance and taken to Welland where surgery to attempt to repair the damage was done around midnight.

Through it all, MacDonald tried to keep his spirits up.

“I never had any pain. It was more sort of doing what I do and putting a smile on my face and trying to hope for the best even through in the back of my head I knew it wasn’t good,” he said. “At that point, I was telling myself it was going to be OK, that it was the minor thing, and I would be back for Game 3.”

A quick chat with the surgeon quickly deflated those hopes. MacDonald’s eyeball had been punctured and was losing fluid.

The surgeon managed to inflate the ball back to normal and suture the eyeball shut, but the damage had been done with about 30 per cent of the contents of the eye having been lost.

“Even before surgery, she (surgeon) knew it wasn’t good,” MacDonald said. “The surgeon was straight up and said the chances were slim to none (that I would see again).”

In the ensuing weeks and months, MacDonald visited eye specialists in London, Hamilton and even the eye doctor of the Toronto Maple Leafs. The news was pretty much the same across the board. The contents of his eye were scrambled inside the ball and there was no way to repair the damage and no real point in surgery.

He also learned of a potential problem called sympathetic ophthalmia, a kind of inflammation of both eyes following trauma to one eye. It can leave the patient completely blind. Symptoms may develop from days to several years after a penetrating eye injury.

“That was probably the most scary and stressful doctor I went to,” MacDonald said.

MacDonald knew there was little hope but wanted to give it one more shot so he saw one last doctor in Toronto.

“I was slowly giving up hope but even though I knew the chances were slim I wanted to see if there was somebody that could at least give it a try because what did I have to lose at that point?” he said.

The Toronto doctor would perform surgery, reattaching the retina and removing scar tissue.

Follow up examinations showed the retina had detached so MacDonald had two more surgeries to try and correct the issue, but both times the result was the same.

MacDonald is now faced with the decision to leave things as they are — he has zero vision in the eye — or remove the damaged eye ball and get a prosthetic replacement at some point.

“There’s no real reason to take out eye even though I’m not seeing anything. It could shrivel up and die over time. If I gets worse then obviously I’ll look into it.”

With all of his options exhausted, MacDonald is coming to terms with the situation.

He can still drive and lead a mostly normal life, but there are adjustments.

“I know I will get used to it. It will take quite some time to get fully used to it,” he said. “My depth perception is off and you adjust to that.”

Just last week he attempted to go to a movie with his girlfriend but had to pass when they discovered it was being shown in 3D.

“It was a little thing. It’s not a big deal to anybody but to me not being able to watch a 3D movie, but it is something that is extremely frustrating,” he said.

His two biggest disappointments are on the ice and in the classroom. His competitive playing days are over, as is his dream of working in correctional services. He had completed a year of school at Mohawk.

“I did a whole year of school at $5,000 basically for nothing,” he said. “It’s tough to swallow knowing I was not going to be able to do that. It was a career ambition. It was a year of my life school-wise that was pretty much wasted.”

As for hockey, he has managed to keep his foot in the door helping out the Ridley Second Team as an assistant coach.

“It was definitely tough for me to step away but it wasn’t reasonable for me to think I could make a comeback in that short a time or purse a hockey career at the university level if that ever came up. It’s a tough pill to swallow, for sure.”

MacDonald said it really hit home when he went to tell Falcons general manager Frank Girhiny he wouldn’t be able to play any more.

“That was an emotional day for sure,” he said. “The major thing for me was at end of the day hockey was a major part of my life but it wasn’t my life.”

MacDonald is keeping busy with a new job as a sales associate at Pro Hockey Life in Hamilton and his coaching. He is also close with several Falcons and hasn’t been a stranger around the rink.

He plans to go back to school in the fall, although, he isn’t quite sure what he wants to study. He mentioned perhaps a trade such as a mechanic and is also exploring apprentice programs.

“I’m just trying to find my way. I’m sort of weighing my options.”

MacDonald is quick to give credit to his family, his girlfriend and her family, as well as the Falcons for their support.

“I have an awesome support system. It’s made it a lot easier for me for sure.”

Still, he says, once in a while the situation can overwhelm him.

“They are little things that set it off and then I have to go be on my own for a minute,” he said candidly.

And he wouldn’t be human if he didn’t wonder from time to time why he has been through so much at such a young age.

“Why does something like that happen to someone like me? There are just so many questions that are unanswered.”

But for every moment of difficulty, MacDonald is also aware things could be much worse.

“I’ve thought about that a lot as well. I still have both my legs and arms. I still have one of my eyes so it’s not like I can’t see at all.”

And now at least he knows his fate.

“That’s been easier on me knowing I can more forward with that reality.”