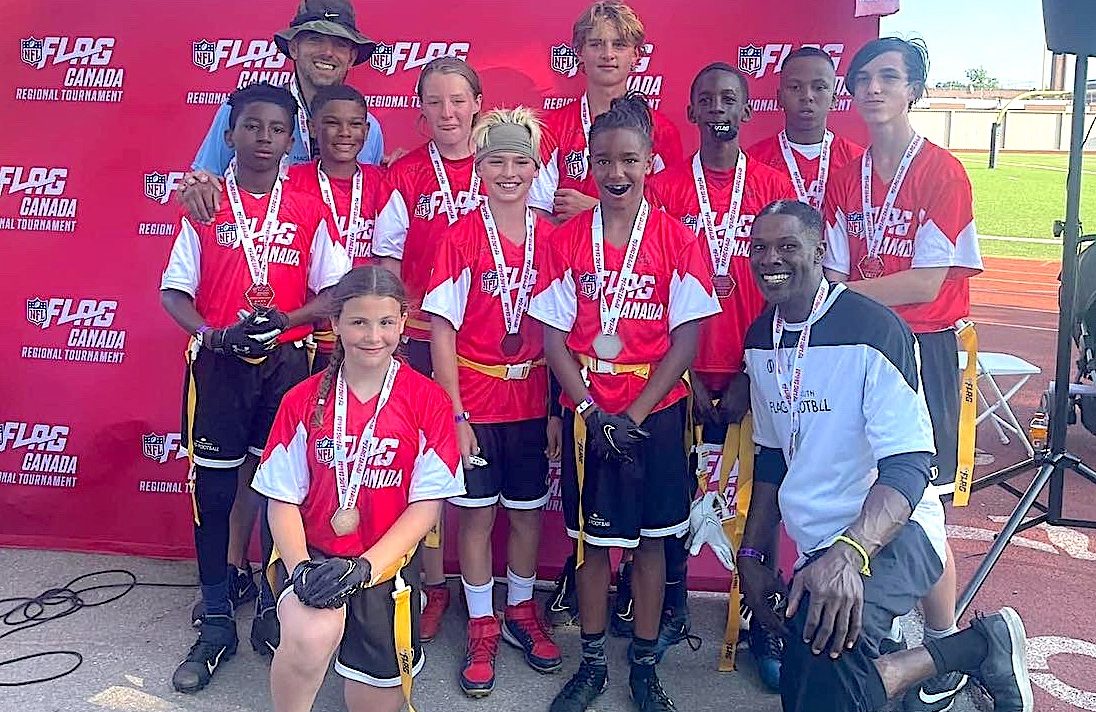 Niagara Youth Flag Football made a huge impression on teams from across the province at last weekend’s NFL Pro Bowl qualifier in Toronto.

The association sent three teams to the event with the end goal of representing Canada at the NFL Pro Bowl in Las Vegas.

“To have three travel teams at one age and have a combined four losses amongst those teams is testament to the talent and star-calibre players being developed,” NYFF founder and coach Matt Hill said. “The fact that we sent three travel teams to a highly competitive tournament with 18 teams and came home with silver, fifth and ninth place is amazing. But that is second to the class and sportsmanship all three teams, coaches, and parents displayed.”

The tournament featured some of the best flag football programs in the province and very fast-paced and competitive games.

One NYFF squad came home with a silver medal following a heartbreaking loss in the finals to a strong team from Quebec.

“It was a dramatic day of games for this team with a quarter-final win against a fellow Niagara team in overtime and a last-play touchdown against a strong Hamilton Marauders team coached by Stefan Ptaszek, the head coach of the McMaster Marauders.”

The silver medalists were led by strong play from offensive MVP Mahkyi Gougen, who made massive runs and catches all day long. Defensive MVP Kaelan Rudyk, who has only been with the program for two months, was a monster on defence, leading the team in interceptions and bat downs. Overall team MVP Ezra Ivory was a force on both sides of the ball and fulfilled every role needed from receiver, running back, some option QB play and defence.

Quarterback Kiptyn MacLeod led the team on several key drives and centre Gabriel Murray made plenty of big catches and plays, including the walk-off touchdown catch to get Niagara into the finals. Owen Saunders led the way with his leadership and athleticism, making massive plays on both sides of the ball and hauling in several touchdowns and interceptions. Caleb Bahati and Stephon Savoury were dominant forces on defence, leading the way with flags pulled and several big plays.

The team was coached by Clifford Ivory and Hill.

Niagara’s second team finished with an impressive 4-1 record, with its only loss in overtime to the Niagara silver medalists.

“This team was just assembled three weeks ago and looked like a veteran team, spinning heads all day long at the tournament,” Hill said.

The team was led by MVP play by Paolo DedDvitiis and strong quarterbacking from Eric Eflante. The girls once again were huge factors for the team with Aaliyah Henry  leading the way at rusher and Abby MacCormack contributing all over the place.

Niagara’s third squad was a younger team but it didn’t show its age. The team finished with a solid 2-2 record and competed its hearts out all day. The team was sparked by the MVP play of Lucas Styger, a Grade 5 student competing against Grade 6s and 7s. He led the way with touchdowns and sacks at rusher. The backbone of this team and other MVP was Grayce Bell.

“She was the ultimate warrior and team player by playing every single snap of the tournament,” Hill said. “She hauled in several touchdowns and couldn’t be stopped out there.”

Next up for Niagara Youth Flag Football are the national championships in P.E.I. next month. It is also hosting a travel tournament in Niagara with 24-32 teams coming Aug. 20.

“We now have our eyes on some massive tournaments in the USA as the kids and program seem ready to make that leap,” Hill said.