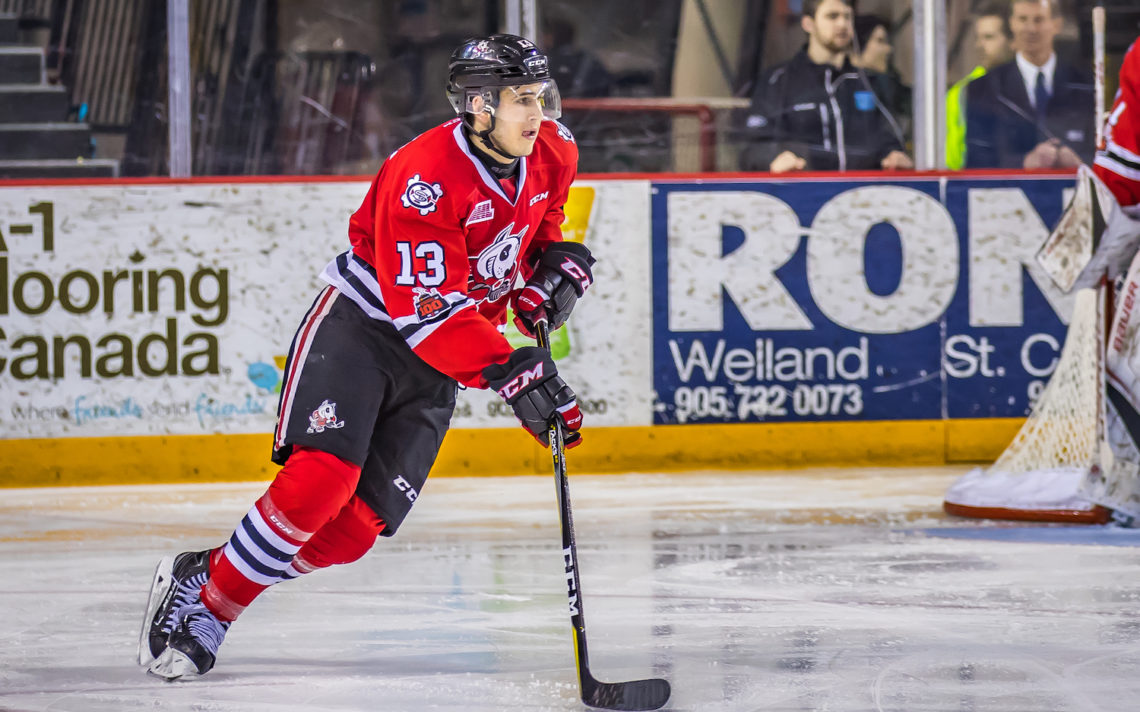 IceDogs riding high into the playoffs

The Niagara IceDogs are pretty much where they want to be as they begin the first round of the Ontario Hockey League playoffs.

The IceDogs head into their best-of-seven Eastern Conference quarter-final series with the Oshawa Generals on a seven-game winning streak and playing some their best hockey of the season.

“If someone came up to us in August and said you’re going to get 35 wins and 85 points and have home ice in the first round and go into the playoffs on a seven-game winning streak, I think everyone would have said ‘Perfect,’ ” IceDogs head coach Billy Burke said. “I think the guys are feeling good and have a lot of confidence right now and we’re right where we want be coming into this time of the year.”

Game 1 goes Friday at the Meridian Centre with Game 2 also in St. Catharines Sunday at 2 p.m. The series then shifts to Oshawa for Games 3 and 4 next Tuesday and Thursday.

The IceDogs had their share of ups and downs this season, including a 10-game winless streak last month, but have been able to rebound from that and not let it define their year.

“You can lose every single night if you don’t show up in this league,” Burke said. “I don’t think it was an issue of that, it was a whole bunch of factors compounded.

“Hopefully, after you go through something like that, you can appreciate how hard it is to win games and how little things matter. We went through some adversity and it didn’t bury us.”

The IceDogs and Generals split a pair of games this season back in October.

The IceDogs won the first meeting 5-4 in overtime on a Matthew Philip goal and then dropped a 4-3 shootout decision later in the month at home.

A quick look at the stats and it appears the two teams are about as evenly matched as possible.

The IceDogs finished five points ahead of the Gens but Oshawa collected one more victory. The Gens scored 10 more goals than the IceDogs (250-240), but Niagara permitted three fewer (243-240). The teams were also within seven minutes of each other for overall penalty minutes.

“If you look at all the numbers it’s amazing how close we are in every single category,” Burke said.” We’re built the same. It’s going to be a battle, a hard-fought series.”

The Generals also finished on a high, winning seven of their last 10 games.

“We played them so early we haven’t even looked at those two games,” Burke said. “We’ve focused on Oshawa’s last 10 games where they have been as hot as anybody.”

Much like the IceDogs, the Generals aren’t built around a couple of superstars, but are solid up and down their lineup and have a strong work ethic.

“You can tell they’re playing as a group and their leaders are stepping up for them,” Burke added. “They are a solid team. They don’t have one guy who scores five goals every game. They are a solid team with a group of responsible guys who care so we have to make sure we are taking nothing for granted.”

The IceDogs, who are expected to be 100 per cent healthy, would love to take advantage of home ice in the first two games of the series.

“We worked so hard the last month to hold on to home ice advantage,” Burke said. “Now the next step is maintaining it. It meant something to us.

“We love playing at home. We think the fans give us that little extra boost and jolt we need to get us through Friday and we’ll go from there.”