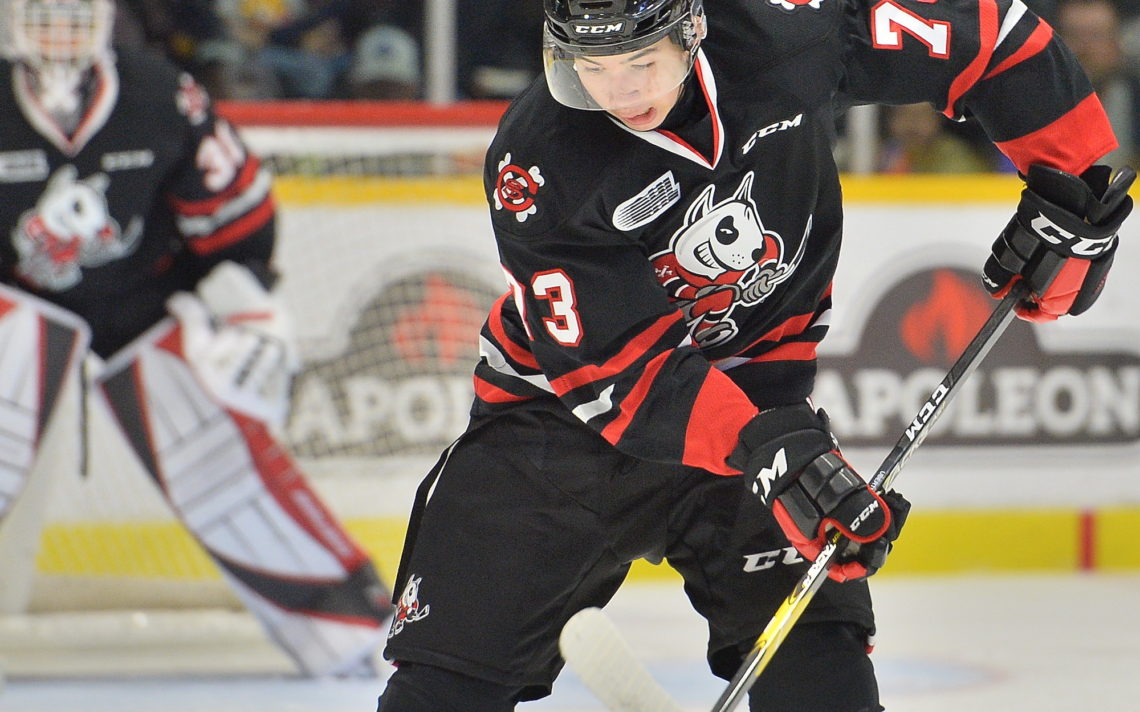 Three members of the Niagara IceDogs could see their futures could change dramatically in the next couple of days.

Cam Butler, Jake Uberti and newcomer Daniil Gushchin are all eligible for the 2020 National Hockey League draft which begins Tuesday at 7 p.m. with the first round. Rounds two through seven will be held Wednesday beginning at 11:30 a.m.

“I’m super excited. It’s kind of hard not to look at it right now. It’s exciting times and I’m getting pretty anxious to see what happens on draft day,” Butler said. “I’ve always loved hockey since I started playing so it’s always been a dream of mine to play there.”

Uberti is also curious to see what will occur.

“I’m excited. It’s a big week,” he said. “It’s something I’ve worked for for quite a while now so to be so close is quite exciting. At the same time, there’s nothing I can do to affect my position in the draft now. I’m pretty relaxed. I’m just looking forward to seeing what Wednesday brings.”

Gushin, an 18-year-old native of Russia who was selected by Niagara in the import draft, is ranked 41st by NHL Central Scouting for North American skaters after playing last season in the United States Hockey League.

According to EliteProspects 2020 NHL Draft Guide, Gushchin brings a lot of offence to the table.

“He’s a great, tenacious back checker who often almost functions as a third defenceman in transition at times.He takes smart routes to the puck on the forecheck, and he’s surprisingly physical for someone his size. He sets up really well by faking a shot or a pass first and then separates by accelerating inside his movements.”

Butler, who collected six goals and 13 points in 27 games for Niagara after being acquired from the Peterborough Petes in a blockbuster trade for Akil Thomas, isn’t too concerned about the rankings.

“It’s a weird year, as everyone knows with COVID,” he said. “You can look at Central Scouting but it comes down to anything can happen on draft day.”

Butler has prepared himself for both good news and bad news.

Uberti moved up significantly after being ranked 202nd at the midterm. He finished with 17 goals and 33 points in 57 games after a rough start.

“I’d be lying if I said I didn’t check them,” he said of the rankings. “I was aware of them but when I started playing better hockey in the second half of the year I knew I’d be ranked higher. I could tell at the beginning of the season when I wasn’t playing good hockey and wasn’t confident in myself, I knew I wouldn’t be ranked high. I didn’t deserve to be.”

Uberti can’t wait to get back to Niagara, regardless of the outcome at the draft.

“At the end of the day, my goals haven’t changed. If I’m drafted, that’s great, but the goal is still to go to Niagara next year and start winning games and be successful,” he said. “If I’m not drafted, it’s the exact same thing.

“Really, my mindset won’t change if I’m drafted or not. I’m just worried about being successful in Niagara.”

Uberti has used the extra down time to further hone his skills.

“It’s been tough. I’m obsessing over hockey right now,” he said. “Normally, I’d be back in Niagara and my obsession would be more under control because I’d be doing things but it’s every second of every day. I can’t wait to get back. Words can’t describe how excited and eager I am to begin playing again.

“I’m just trying to dedicate as much time as I can towards getting better because I know the more time I put into it, the more I’m going to get out of it during the season.”

Butler is also itching to get back to the Meridian Centre.

“You come home at the end of the season and you have three months of training and then you expect to go back to Niagara but then there’s another three months of training,” he said. “It different for sure but I’m getting pretty excited to get back to Niagara. It’s one of the best rinks and best fans in the league. It’s fun to play there so I’m just looking forward to getting back to that.”