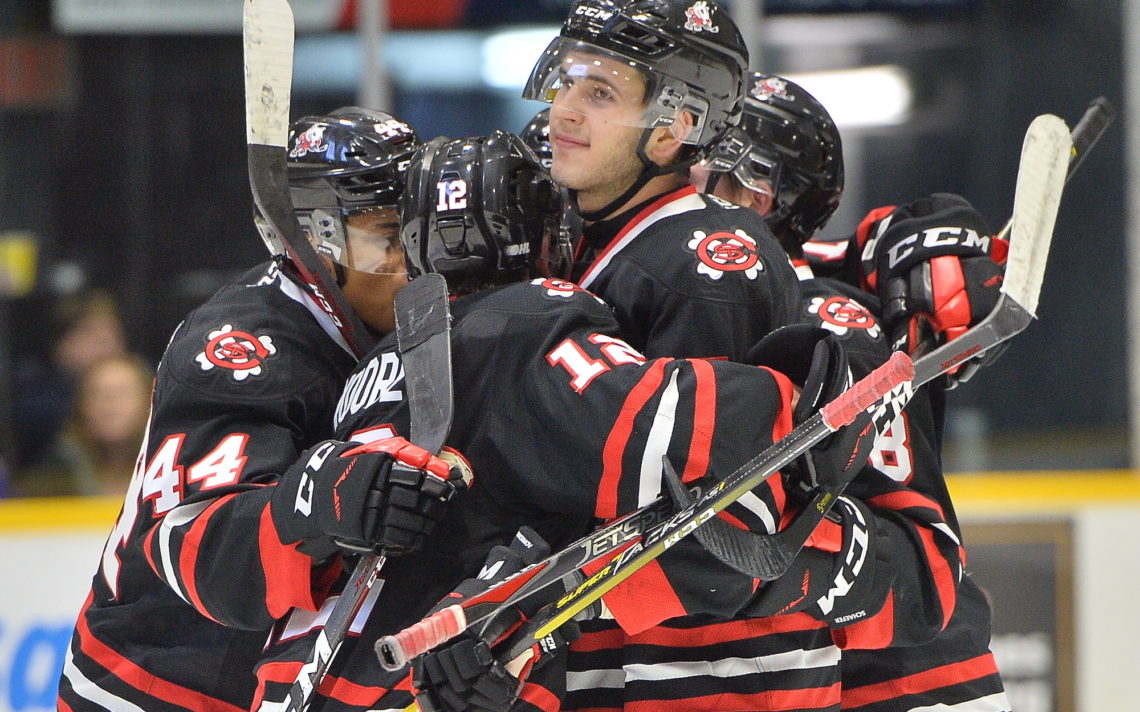 The Niagara IceDogs are living in a different world this season.

Last year at this time, the IceDogs were boldly announcing they were all in for a run at an Ontario Hockey League championship and possible berth in the Memorial Cup.

The time around, the organization is more focused on player development and teaching with many of the mainstays from last season gone and a fresh, new batch of young players on the roster.

The IceDogs host the Sudbury Wolves Thursday to open the OHL 2019/20 regular season.

“I think .500 would be great for us,” IceDogs coach Billy Burke said. “I certainly think it’s within reach but we haven’t put up a number or something like that we are aiming for right now.

To do that, the IceDogs will need to develop as the season progresses.

“We usually break into 10-game segments. The big thing is we want to be better. However we are in the first 10 games, we want to be better in the second segment,” Burke said. “Hard work and competitiveness really makes up for youthful mistakes. If we aren’t thinking too much and using our speed and skill, I think that will cover up a couple of mistakes.

“There will be mistakes. It will be a work in progress.”

Burke and his staff (Jody Hull, Mark Mancari, Mark Janosz) are well aware there is a delicate balance between development and being competitive.

“Going 0-68 is certainly not going to develop anyone when you are getting pounded every night,” Burke said. “The perfect world is to put guys in situations and they have success and get wins. If they do something and it works for them, that builds confidence.

“We want to put the guys into meaningful games now. Meaningful games are if we are in a race to make the playoffs or against a team that has loaded up to see what it takes to be a successful team. It’s important we start putting those building blocks into place so sooner that later, we can be one of the top teams again.”

Burke said patience will be paramount.

“Every group of guys is different,” he said. “Certain core things stay the same but I don’t think with guys going through it for the first time putting a gun to their head everyday is necessarily the best way to get the most out of them.

“We’ll do a ton of video and a ton of individual teaching. We’re going to have to really stay on that.”

The IceDogs return a decent core from last season’s team led by snipers Akil Thomas (Kings) and Phil Tomasino (Predators). Both are still NHL camp but should return soon.

“They’ll be back when they’re back,” Burke said.

Both should be among the top forwards in the league, but will need help.

“Obviously Akil and Tomasino are too good not to score in this league but we can’t expect them to do all the scoring every game by themselves,” Burke said. “We’re going to need guys to step up and score 20 goals that we didn’t expect to and guys who had around 20 goals last year, we’re going to need them closer to 30 goals this year to help us win games and stay competitive.”

Among those expected to up their offensive game this season are over-age forward Oliver Castleman, sophomore winger Jonah DeSimone, and import speedster Kyen Sopa.

Newcomers Anthony Agostinelli and Cameron Snow have also been impressive.

“There is lot to be excited about. Not only guys who are ready to be stars, but guys we think have potential in them as well,” Burke said.

Expect Enright, Cato and Chanton to see a considerable amount of playing time.

“There will be a lot of opportunities to play and get better and make their mistakes. It will help them in the long run, but at the same time, you just don’t want to throw them to the wolves,” Burke said.

Christian Sbaraglia will get the start in goal Thursday and be backed up by Tucker Tynan. For now, young Josh Rosenzweig will act as the third goalie.

Burke said the staff and players are eager to get the regular season started.

“It feels like we’ve been in training camp for three months here,” he said. “We’re excited and pretty impressed with the strides a lot of guys have made so far.

“The returning players have done great job being leaders and mentoring and the young guys are working as hard as they can and are trying to pick it up as quickly as possible.”