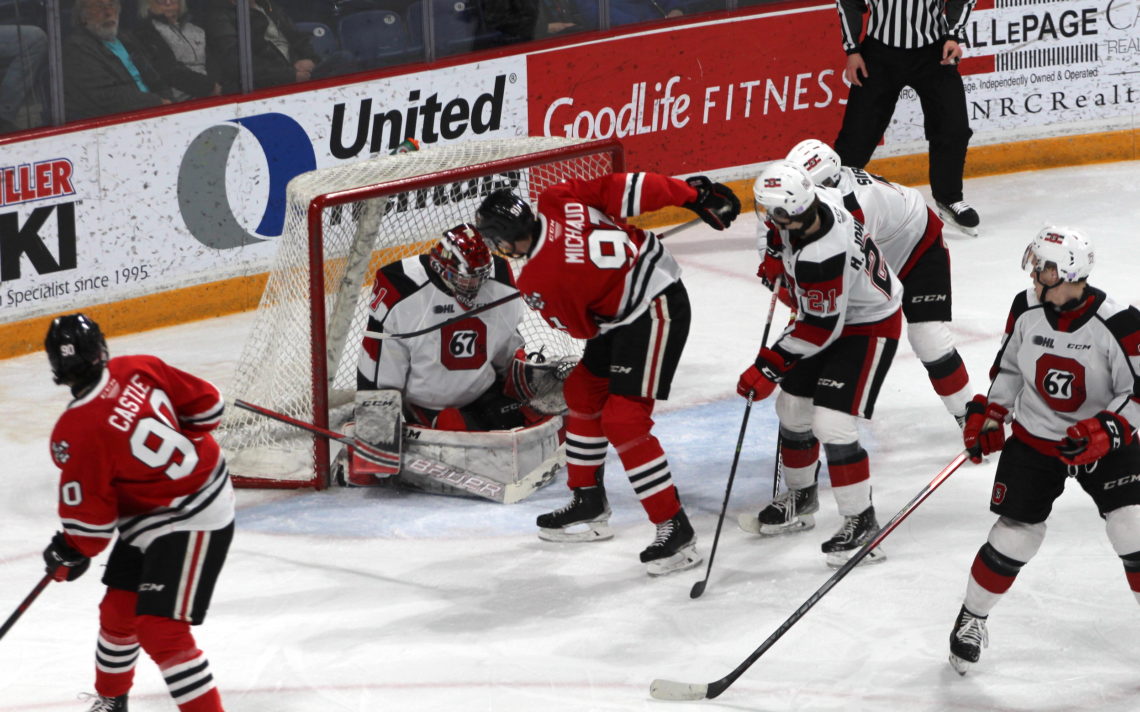 Pano Fimis is firing on all cylinders as his rookie campaign comes to a close.

Fimis’ 12th goal of the season halfway through the third period broke a 3-3 tie and gave the Niagara IceDogs a 4-3 triumph over the Ottawa 67’s in Ontario Hockey League action Sunday afternoon in St. Catharines.

The 17-year-old rookie centre now has 38 points in 46 games and has been especially effective since returning from a shoulder injury sustained in Erie in mid-February with 11 points in nine games.

“Pano is a guy that we’ve really thrown into the fire and expected a ton from him as a rookie,” IceDogs coach Billy Burke said. “Everybody develops differently. Everyone’s learning curve is a little bit different.

“He hasn’t had that veteran support to lean on that some of these other these young guys around the league have had. He’s had to do it all his own.”

Fimis, who turns 18 in May and is eligible for the National Hockey League draft this summer, is also a solid defensive player who is well aware of his responsibilities in his own end.

Looking ahead, Burke feels Fimis may be on the verge of stardom.

“I think of all the guys in the league, he might make the biggest step next year.”

The win, along with losses by Sudbury and Peterborough Sunday, keeps Niagara’s long-shot playoff hopes alive. The IceDogs trail the Wolves by three points for ninth place in the Eastern Conference and the Petes by eight points for the eighth and final playoff spot. All three teams have five regular season games remaining.

“First thing is we want to catch Sudbury,” Burke said. “That’s the goal first and then we’ll see what happens. We noticed we were getting some help around the league but we weren’t helping ourselves.”

The IceDogs won’t need anyone’s help in their next two games as they travel to Sudbury Tuesday and Peterborough Saturday.

“Great job by our guys to get a huge win for us. Everyone is feeling confident that we can pull these ones out now,” Burke said.

Niagara’s Daniel Michaud opened the scoring with his 12th of the season early in the first period.

That was it for the scoring until the 67’s potted two goals 53 seconds apart late in the second. Three minutes later Luca Pinelli scored for Ottawa again to give the visitors a 3-1 lead after 40 minutes.

Niagara then stormed out of the chute in the third period with goals by Dakota Betts and Daniel Gushchin 1:09 apart to tie the game setting the stage for Fimis’ winner.

“It’s a weird one. That’s junior hockey sometimes,” Burke said. “Kind of played into their hands. For the first two periods we were kind of sleepy and they’re obviously a very-well coached and well-structured team and they forced us into a lot of turnovers we didn’t want early on.

“Great job by the guys. Great character to come out hot in the third and win a game.”

The 2005-born Franklin, Tenn., native was drafted 105th overall in the sixth round by the IceDogs in the 2021 OHL Priority Selection. He won the U15 USA National Championship with Honeybaked as a teammate of  Juan Copeland. Bishop has spent his 2021-22 season playing in the USA High School League (Independence/Summit “C”), where he has 17 goals and 13 assists for 30 points in just eight games. He is also currently playing in the U16 USA National Championship with the Florida Alliance.

“This is another exciting signing for our organization,” IceDogs general manager Joey Burke said. “Cole is a guy who has always excelled at the top level, and has really seen his game develop over the past year. Since impressing at training camp, Cole has been very impressive on and off the ice, has grown significantly, and is garnering much attention from the NCAA and the USHL.”

The IceDogs are hopeful of getting Bishop into a game before the season ends.

Up next: At Sudbury Tuesday. At Peterborough Saturday. Home to Kingston Sunday, April 10.