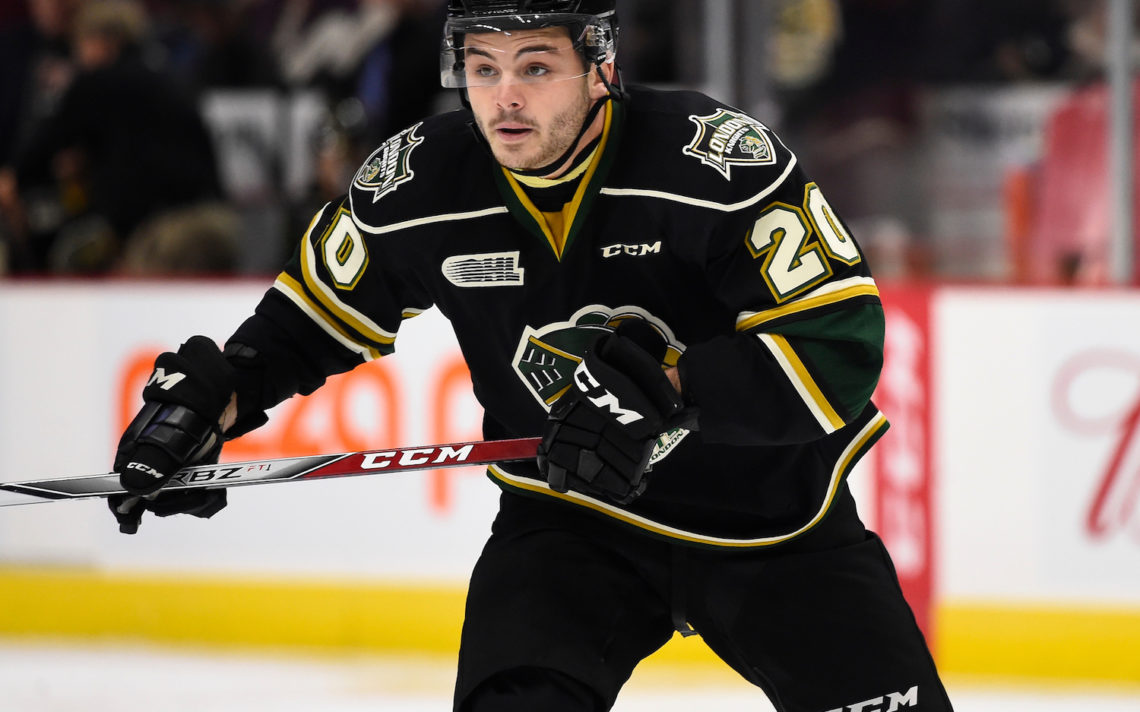 IceDogs load up on carbs

Adrian Carbonara, seen playing for the London Knights, is expected to add toughness and experience to the Niagara IceDogs. PHOTO BY: TERRY WILSON/OHL IMAGES

The Niagara IceDogs picked up some much needed toughness and experience, dealing for overage forward Adrian Carbonara.

The Maple native, picked up from the London Knights for a fourth-round pick in 2020, made his debut for the IceDogs Friday in a 6-1 win over the North Bay Battalion in an Ontario Hockey League game action at the Meridian Centre.

The move was made after some serious consideration, according to Niagara head coach Billy Burke.

“We didn’t want to make a panic move when we were in a losing skid there but after last night (3-2 loss to Kingston) it wasn’t a panic move,” Burke said. “It was a need we felt we needed to address and the price was right.

“It was something where we felt the time was right.”

He is also known to play on the edge and be a huge pain in the backside to play against. The classic kind of player who is loved by the home fans and hated pretty much everywhere else.

“He’s got some psycho in him for sure, that’s part of the reason we got him,” Burke smiled. “He plays it hard, he plays smash mouth. He’s a dynamic we did not have in our system.”

Burke has no worries Carbonara is coming to Niagara just to play out the string.

“Credit to him, he wants to play and get a contract. He’s not here to ride out the year and go to university. He wants to be a pro and be a hockey player.”

Burke used Carbonara on a line with Akil Thomas and Kirill Maksimov, adding a much-needed dimension of sandpaper to skate alongside two of the more skilled forwards on the team.

Carbonara said he had no problem when he heard he was going to be an IceDog.

“As soon as I got off the phone with them, I knew they wanted me and it was going to be a good for me,” he said.

Carbonara expects to keep on doing what he does best.

“Not a whole lot has changed since I got into the league,” he said. “I’m going to be going as hard as I can and whatever it takes to win every night. Just do what I have to do to win.”

Carbonara also welcomes the leadership role he will no doubt be asked to fill.

“Definitely I’m here to help out with that. I’ve been around the block and I know what it takes to be a winning team in this league and be successful. I’m just going to bring all that here and hopefully it goes well.”

Niagara grabbed an early 1-0 lead in the first period when Kyle Langdon tipped in his third of the season. The Battalion tied it up with a late goal on the power play by Justin Brazeau.

Philip Tomasino, fresh off playing for Canada at the World Under-17 Challenge, gave the IceDogs a 2-1 lead when he tipped in a shot from the point just seconds after missing a wide open tap in. Maksimov and Oliver Castleman then added goals later as the IceDogs took a 4-1 lead into the third.

The IceDogs then added a pair in the third to hit six for the second time this season.

“To see us score six goals and have a couple of goal lead going into the third was nice,” Burke said. “Leads can change all the time so we didn’t want to sit back and play prevent for anything like that in the third. We wanted to go at them.”

The effort was a marked improvement over Thursday’s game, which Burke credited to a positive outlook in the locker room.

“When we met with them this morning, it was not doom and gloom. It’s easy to be negative when things aren’t going well,” Burke added. “You have to stay positive even in the dark times.”

Ice cubes: Ian Martin, Drew Hunter, Billy Constantinou and Bradey Johnson did not dress for the IceDogs  . . .  Christian Propp, Eric Allair, Travis Mailhot, Rhys Forhan and Daniel Walker were scratched for the Battalion . . . Martin took the draw for the ceremonial face off to honour his 91-year-old grandfather who was in attendance and a war veteran  . . . Beamsville’s Adam McMaster came into the game with a goal and 10 points in 21 games for the Battalion

BSPN Star of the Game: IceDogs captain Johnny Corneil with a goal and two assists.

Up next: The IceDogs travel to Mississauga Sunday at 2 p.m.