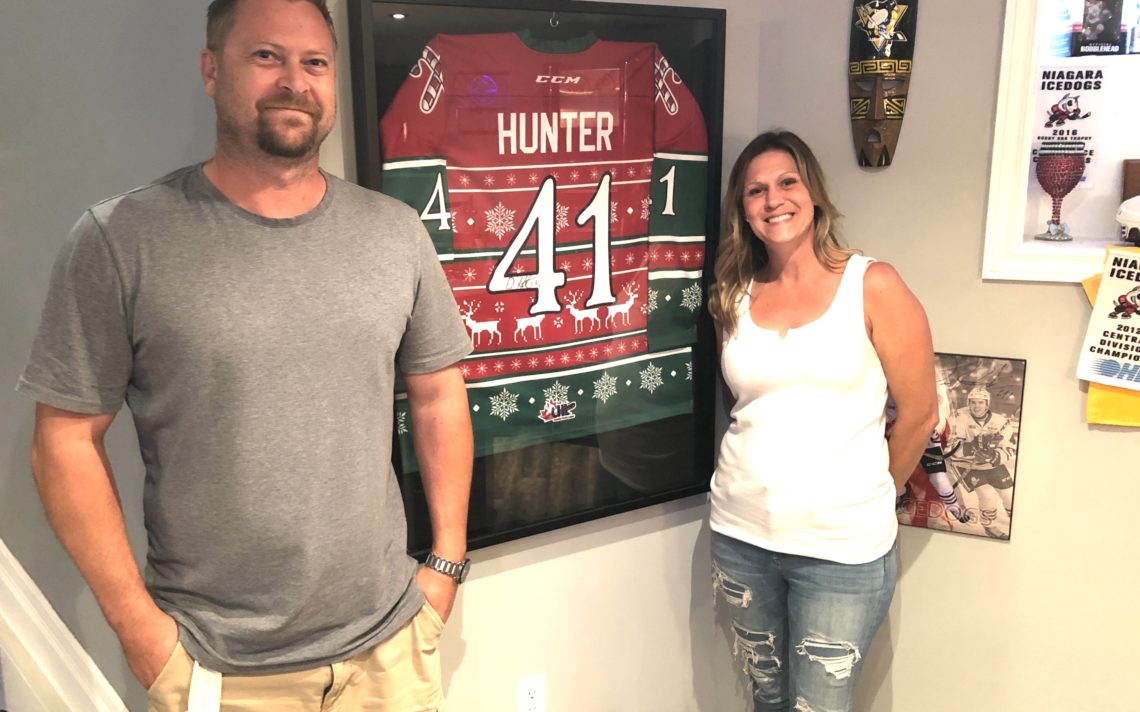 IceDogs home away from home

About four year ago, Chris Hawthorn and his wife Bryony were sitting outside relaxing when Bryony dropped a bomb.

Bryony had been doing charity work with Niagara IceDogs president Denise Burke, who repeatedly spoke to her about becoming a billet family.

Bryony finally mentioned it to her husband, who wasn’t quite sure what to make of the idea.

“It was a last-minute decision. We were sitting outside here and I said, ‘Do you want to have a kid?’ ’’ Bryony smiled.

Chris mulled it over and then quickly began to think what needed to be done to their home in order to get it ready for a boarder.

“I didn’t have the basement ready yet,” he recalled. “It’s going to take two weeks so I guess I gotta get going!”

Chris, who is a contractor by trade, called some of his buddies and they quickly revamped the basement into a spacious mini-apartment/man cave complete with a bar, huge TV, bedroom and spacious bathroom. 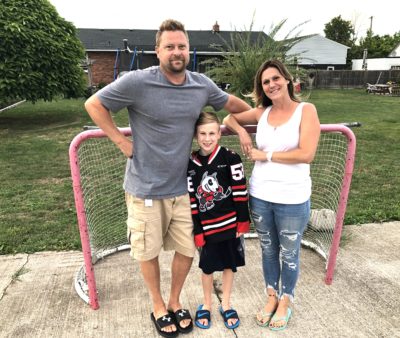 A couple of weeks later, defenceman Drew Hunter moved in and the Hawthornes quickly realized they made the right decision.

“He became a member of our family very quickly,” Bryony said. “Our family is very open. You’re just part of the family right away.”

“With Drew, when we went somewhere, he came with us,” Chris added.

Hunter, who is now a the University of Western Ontario, keeps in contact with the family.

“Chris and Bryony were amazing,” Hunter said. “They did everything possible to make me feel comfortable. From my first day there to the last, it felt like home. Every time that I needed help they were there for support. Any time of day and night they would do what they could for me to make me feel better.

“Words can’t describe how much me and my parents appreciate them.”

Billet families are given a monthly stipend to off-set the cost of groceries and instructions to help the players settle in.

“Basically we were told we had to take care of pre-game meals and make sure there was food around, show them how to do laundry so they can take care of themselves, but we’re not like that,” Bryony said.

Indeed, Bryony and Chris go above and beyond for their billets.

Bryony won’t let anyone near her washing machine and takes care of the wash, including making sure the king-sized bed has fresh sheets every week. She also cleans the apartment.

Chris, meanwhile, is responsible for the food.

“I like to cook so whenever possible there is a good meal made — breakfast, lunch and dinner,” he said proudly.

Hunter stayed with the Hawthorns for almost two years and quickly became a mentor and buddy for Chris and Bryony’s 10-year-old son, Jack.

“Jack is a young hockey player and it’s been amazing for him,” Chris said.

Jack, who is slated to enter Grade 5 at Woodland Public School, loves having a billet.

“Adrien (Beraldo) and Drew would come and ask to play with me even without me asking,” Jack said. “We’d play mini sticks or NHL. It’s fun to hang around with them.”

When Hunter was traded to Erie, it was difficult on the family.

“We would even go to road games to cheer Drew on because his family (from Michigan) couldn’t always come,” Bryony said. “When Drew was traded last year it was tough. It was a sad day and then three or four days later we got Adrien.”

The billet experience has converted the Hawthorn’s into big IceDogs fans.

“Went to a few games (before becoming billets) but that definitely changed,” Chris said. “You’re helping the community out and maybe one day Jack will go away and I would wish that would come back around.”

“We really got into hockey when the IceDogs began living here with us,” Bryony added. “We look forward to going to the games. That was our night out.”

The Hawthorns are hoping to having Beraldo back again this season once the Ontario Hockey League begins play again.

The family plans to continue to offer their home to billets for the next three or four years and then see where Jack is in his hockey development.

“We hope Jack can become an IceDog one day,” Bryony smiled.

The family has also opened its home to several other players who often come and hang out in its spacious backyard.

Chris doesn’t regret a second of the experience.

“We have had quite a few kids over from the team over the last few years and you get to meet them all and they are all really good kids,” he said. “You heard horror stories and there are jerks out there but we’ve never seen that with any of the IceDogs. They have all been really respectful and nice.”