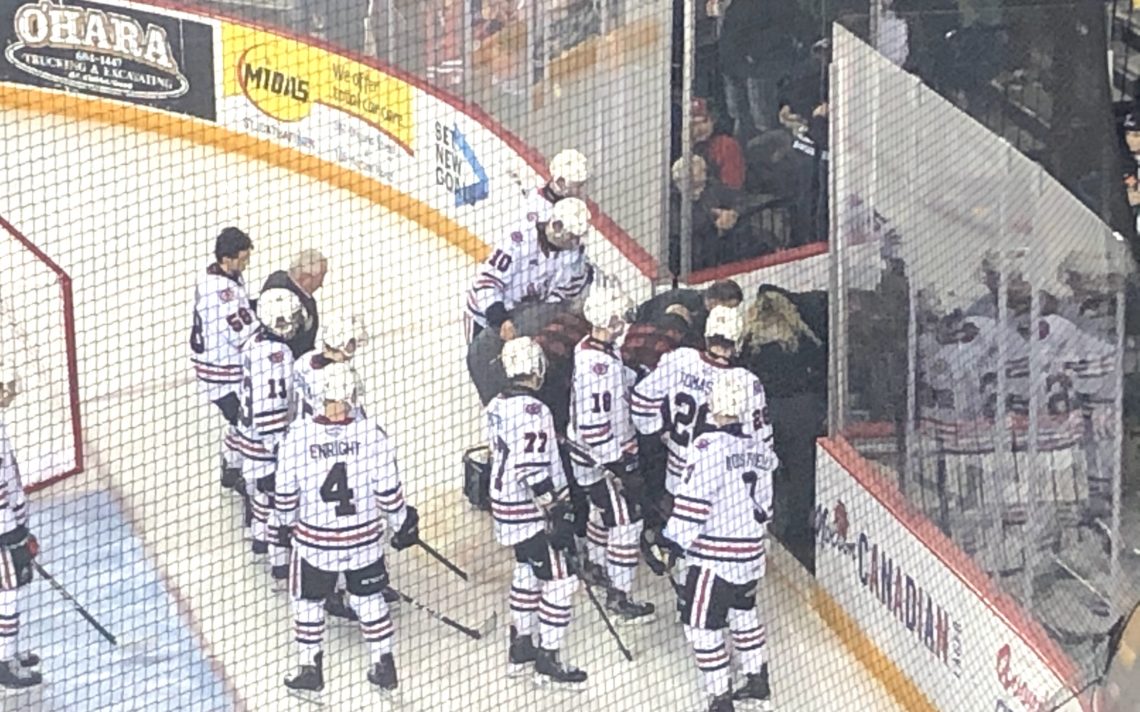 Burke held a press conference Friday afternoon at the Meridian Centre and praised the work of all those involved.

“The exact wording to me (by the doctors) was that the work of the on-ice staff and everyone in house saved his life,” Burke said.  “There was a point in time where it was an option he may have died on the ice due to loss of blood.”

Tynan, who is in stable condition in hospital in St. Catharines and is expected to be discharged Saturday, suffered a torn quad muscle in his right leg when cut by the skate blade of London’s Hunter Skinner, who slid into the goalie early in the second period.

Tucker attempted to get up following the collision but was unable to do so as a pool of blood quickly formed on the ice.

At the point, Chris Trivieri, Nick Hornby, Nick Tamburri of the IceDogs training staff, and Doug Stacey, the Knights head of physio, rushed on the ice to attend to the 17-year-old Chicago native.

“I am dead set that the work of everyone together generally did save this young man’s life and obviously this is by far the most important thing,” Burke said. “My hat goes off to everybody involved. True professionals and it could not have been handled better.

“Everybody worked in concert and really handled it extremely admirably.”

Tamburri accompanied Tynan to the hospital in the ambulance where he underwent surgery for a torn quad muscle. The femoral artery was not severed.

“The quad muscle was completely torn apart and ripped through by the skate blade so it certainly will be a significant recovery process, but from our end the most important thing is we are out of the dark and the worst is behind us and it’s no longer considered life threatening,” Burke said. “We were told by doctors it sliced through all four parts of the quad muscle. It literally shredded the entire muscle.”

Once Thursday’s game was postponed, the IceDogs coaching staff and the entire roster went to the hospital to offer their support, but were unable to see Tynan. The club quickly contacted Tynan’s mother, Ruth Tynan in Chicago, and flew her in. Assistant general manager Brandon Currie met her at the airport and took her to the hospital.

“She was watching on TV and was obviously quite distraught,” Burke said. “We just tried to calm her down and really tried to walk her through that he was cognizant in the ambulance and responsive. He was relatively calm himself and (we were) just trying to keep her up to date every step of the way.”

Burke said the team had a meeting Friday morning to address the situation.

“Certainly the players were extremely shaken up,” Burke said. “A lot of tears, a lot of jitters. We’re all brothers, not only in Niagara, but league wide. You see the entire hockey community how close-knit it is. It rattled the guys. Even myself, I’m shaken up by it today still. It’s something as a group we need to have that family dynamic and work together going forward.

“The guys really are banded together to get through this as a group.”

Burke, who said Tynan was in good spirits Friday and was receiving visitors, did not rule out a possibility of a return to action this season for the rookie netminder.

“There’s always a chance,” he said. “If there’s one guy in the world who can return from something like this it’s Tucker Tynan. He’s an absolute warrior and a champion. He’s got the heart of a lion.

“Obviously the most important thing now are that the injuries are no longer considered life threatening. The surgery went well. Our focus is just on getting him healthy and feeling good. Certainly there’s no rush and if he’s out for the duration of the season in an effort to get him better, then that’s the most important thing.”

Burke said Christian Sbaraglia will handle the bulk of playing time going forward with Josh Rosenzweig, who had been playing junior B in Welland, acting as back-up.

“Once we know more of the extent and the time frame with Tucker, we’ll act according at that point,” Burke said.

The IceDogs were scheduled to play this weekend in Peterborough and Ottawa, but Friday afternoon issued a press release stating the games would be postponed. Make up dates of those games, as well as Thursday’s game, will be released at a later date.

The IceDogs issued the following statement regarding an incident in the stands during Thursday’s game.

The Niagara IceDogs Hockey Club and London Knights Hockey Club are aware of the situation in section 103/104 that occurred during last night’s game.

The individual escorted out of the sections has visited the IceDogs office to provide context to his comments.

The individual, to the best of both teams’ knowledge, attended the game as a neutral spectator.

The individual, with a background in the military, has experience dealing with traumatic medical situations. His comments were made based on experience and fear for Tucker Tynan’s life. It was his intention that his comments get Tucker off the ice quickly, and in an ambulance to the hospital where he could be treated.

This was a very intense situation, and reactions were emotionally driven. Other witnesses in the section have come forward to explain the situation, that matches the individual’s statements. It is our hope that, with more context, the individual’s comments can be understood from a different perspective.