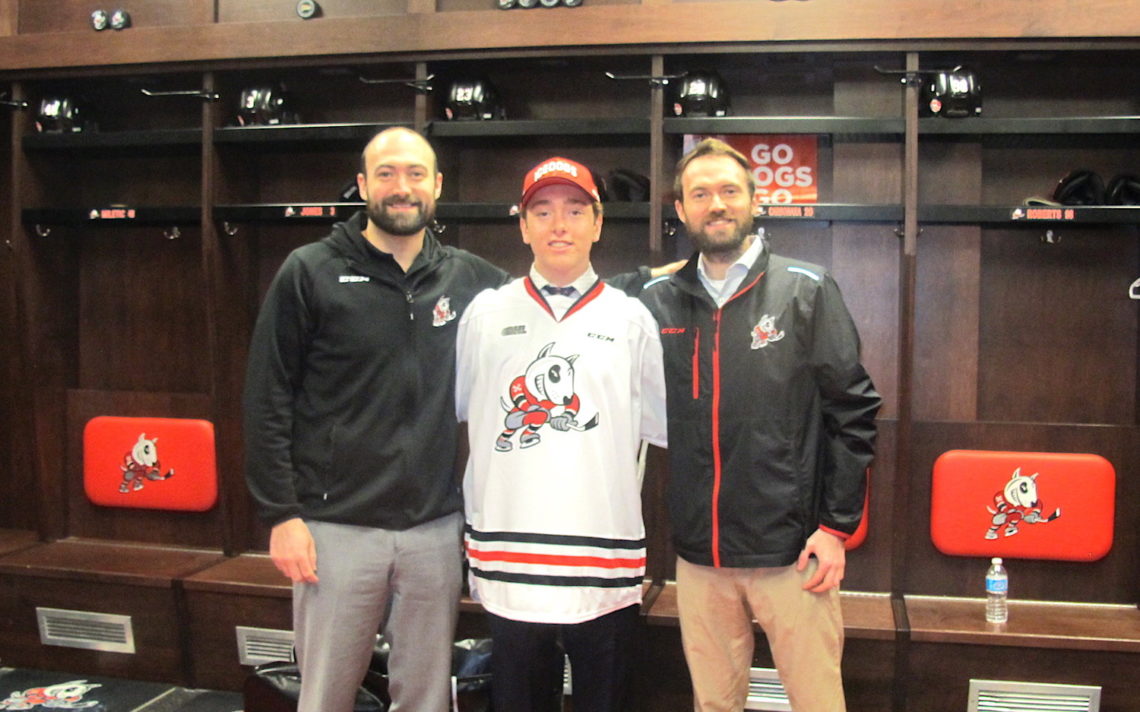 Niagara’s first round pick, Lleyton Moore, is flanked on the left by head coach Billy Burke and general manager Joey Burke on the right. Photo by: BILL POTRECZ

The Niagara IceDogs’ plans for the Ontario Hockey League draft Saturday went out the window in the first round.

The IceDogs had hoped to add an impact forward, but as the opening round unfolded they held their breath as defenceman Lleyton Moore was still available as their pick approached.

Moore was rated by many to be in the top five, and when he was still available at No. 12, the IceDogs couldn’t believe their good fortune.

“It was a little bit of a scramble for us,” IceDogs general manager Joey Burke said. “We thought if he got by five, he wouldn’t get by seven, or get by 10. We couldn’t believe he fell to us.

“He was head and shoulders the most talented player available so we had to make the decision and I think it was the right one, for sure.”

Moore is a 5-foot-7, 160-pound defenceman who played last season with the Toronto Marlboros minor midgets where he collected 16 goals and 50 points in 54 games.

Moore is described as a mobile defenceman who loves to have the puck on his stick and isn’t afraid to lead the rush. He is a strong skater in every direction, is explosive, and has a very high top speed. His puck skills are described as elite and he sees the ice well and is very creative. His biggest attribute is his skating ability.

Moore was thrilled to become an IceDog.

“Luckily, I got picked by Niagara which is a great organization,” he said.

Moore made the trip from his hometown of Woodbridge with his parents to meet members of the IceDogs organization and tour the Meridian Centre.

“I find this is such a great organization,” he said. “The dressing room is amazing, the rink, the stands, the atmosphere. Everything they give us is unbelievable.”

Moore had been looking forward to being selected in the OHL draft for quite some time.

“I couldn’t wait for the day.”

Moore is a former teammate of IceDogs defenceman Billy Constantinou and plays a similar game.

“I’m a 200-foot defenceman,” he said. “I can shoot the puck and get to the net. I’m good in the defensive zone as well and take care of my own end.”

“They’re both top offensive pairing type guys,” Burke said. “He (Moore) likes to make plays and have the puck on his stick.

The IceDogs did not have a pick in the second round but did have the first pick of the third round where they selected forward Stephen Halliday from the Marlboros.

There were some rumblings Halliday might not report to Niagara, but Joey Burke quickly put those fears to rest.

“He’s reporting, 100 per cent. He’ll be an IceDog,” Burke said. “I fully expect to have him signed this summer. He’ll be at training camp and report and will be an impact top-six guy two years down the road.”

The issue was where Halliday would play next season if he does not make the IceDogs. 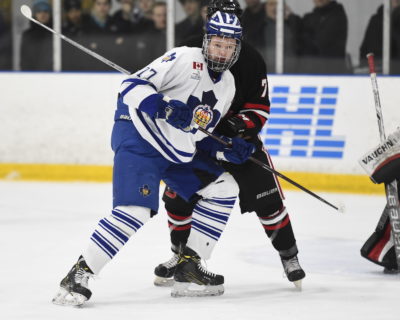 “We explained to him ice will be hard for a third-round pick so we needed to figure out where he will develop next year if it’s not with us,” Burke added.

With their first pick of the fourth round, the IceDogs selected winger Jonah De Simone of the Mississauga Reps. The Richmond Hill native is listed a 5-foot-9, 159 pounds. He had 11 goals and 26 points in 33 games.

Two picks later at 72nd overall, Niagara picked centre Jake Uberti of the Mississauga Reps. The Kleinburg native had 11 goals and 33 points. He is listed at 5-foot-11, 179 pounds.

Grimsby resident Ethan Sims went next in the fifth round while defenceman Mikael Bissonnette of the Hawkesbury Hawks was selected in the sixth round. The 6-foot-1, 193-pound rearguard collected eight goals and 18 points in 40 games.

With the 12th pick of the seventh round the IceDogs took centre Cameron Snow of the Barrie Junior Colts. The 5-foot-4, 139-pound native of Thornton, ON, collected 18 goals and 35 points in 32 games.

St. Catharines’ Michael Craig was selected in the ninth round. The 5-foot-8, 141-pound defenceman collected four goals and 18 points for the Niagara North Stars. He also played six games with the Thorold Blackhawks.

In the 10th round, the IceDogs took goalie Joseph Tynan from Detroit Little Caesars.

“We got a goalie in the 10th round who should have gone in the fifth,” Joey Burke said. “He’s a bit hidden as he’s playing in Detroit. He’s an extremely impressive guy who is committed to the OHL.

“We’re smart enough to realize we’ll likely need a backup next year. We’ve got two guys who are proven they can be starters so that’s a decision we’ll have to make and he’s 100 per cent in that mix.”

“We’re thrilled. I consider ourselves lucky with the picks we have to be able to get the guys we did,” Joey Burke said. “We didn’t expect for some of this high, high talent to get to us.”

St. Catharines native Spencer Smith was the first local player selected. The speedy winger was chosen by the Guelph Storm in the third round, 47th overall.

Other locals to be selected by other teams were: Welland’s Colton Ambrosio, who played in Buffalo last season, in the fourth round by Ottawa; Goaltender Dalton McBride of Grimsby, who played for the Niagara North Stars, by Kitchener in the fifth round; Forward Owen Homes from Niagara who went to Flint in the 11th round,  defenceman Robbie Stewart of Niagara who went to Sudbury in the 12th round and forward Matteo Costantini, who went to Hamilton in the 15th round.