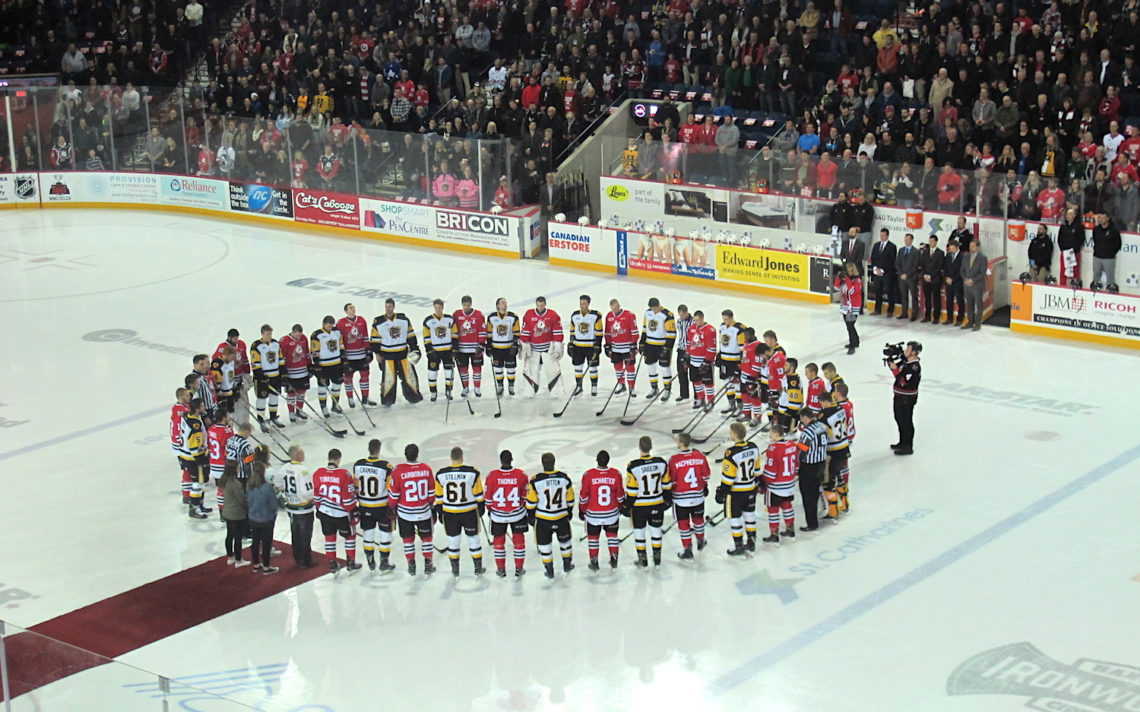 Stephen Dhillon could be excused if he feels as though he has a bullseye on his jersey.

The veteran netminder has been front and centre of several goalmouth scrambles and has taken more than his share of abuse as the Hamilton Bulldogs have done their best to knock him off his game.

Nevertheless, Dhillon has managed to keep his cool for the most part and also excel between the pipes for the Niagara IceDogs.

Dhillon kicked out 47 shots Monday as the IceDogs topped the Bulldogs 4-3 in overtime at the Meridian Centre.

It was a crucial victory for the IceDogs, who now trail the Bulldogs 2-1 in the Ontario Hockey League Eastern Conference best-of-seven semifinal.

Kirill Maksimov scored the winner at the 8:33 mark after the IceDogs had blown a two-goal lead late in the third period.

“It was great. The boys regrouped and we knew this was our game,” Dhillon said. “We outplayed them for most of the game so we thought we were going to get it done in front of our hometown fans.”

Dhillon is well aware of Hamilton’s game plan to try and get traffic in front of his net.

“My job is to stop the puck as best as I can,” said Dhillon, who took a slashing minor in the second period. “Sooner or later we’re going to get a couple of calls. We just have to stay disciplined and we’ll be fine.”

With three overtimes games in the series, Dhillon has seen more than his share of pressure situations.

“You try not to think about it,” he said. “It’s pretty straight forward. If you mess up and let one in, it’s over. There are no secrets. It’s just another period, just another hockey game.”

Niagara coach Billy Burke was well aware how important the win was — a loss and the IceDogs would have been down 3-0.

The IceDogs turned in a solid first period and collected a pair of goals by Ben Jones and Akil Thomas to take their first lead of the series.

Hamilton got on the board about halfway through the second when Issac Nurse scored a shorthanded goal for his fifth of the playoffs. The IceDogs answered back two minutes later when Elijah Roberts snuck one through from the point on the power play as Niagara took a 3-1 lead into the third.

The Bulldogs pushed hard in the third and scored a pair of late goals in the final 3:26 to tie the game and send it into overtime. Mackenzie Entwistle tied the game on a power play after Niagara captain Johnny Corneil was in the box for a high sticking penalty called with under a minute to play.

“Two goals in the last three minutes, obviously you never want that,” Burke said. “That’s what happens, the more you play in your end, the more danger there is.”

Ice cubes: Ian Martin, Andrew Bruder and Billy Constantinou did not dress for the IceDogs  . . . Kade Landry, Jake Gravelle, Narvin Mutter, Owen Burnell, Jake Murray and Liam Van Loon were scratched for the Bulldogs  . . . A moment of silence was held for the victims of the bus crash which took the lives of 15 members of the Humboldt Broncos. Donations were accepted during the game and large banners were available for fans to write their well-wishes. The banners will be sent to the Broncos.

Up next: Game 4 Wednesday at Meridian Centre. Game 5 Thursday in Hamilton.