The Niagara IceDogs dropped their first game of the season in regulation Sunday as they were blanked 3-0 in Saginaw.

Following a scoreless first period, the Spirit got on the board with the lone goal of the second period as Roberto Mancini scored halfway through.

The game remained 1-0 until the Saginaw scored twice late in the third on goals by Cole Coskey and Cole Perfetti.

“We came out fast and hard in the first period but then it seemed our first road trip weekend caught up to us and we didn’t have the same jump against a big and good Saginaw team,” IceDogs coach Billy Burke said.

Marshall Frappier made 26 saves for the shutout.

Tucker Tynan turned in another outstanding effort in net for the IceDogs with 41 saves.

“Tucker was outstanding and really gave us a chance to win,” Burke said.

The previous night in Flint, the IceDogs earned a point with a 3-2 shootout loss to the Firebirds.

Niagara fell behind 2-1 after one period. Oliver Castleman continued his strong play for Niagara collecting his third of the season. Conner Roberts and Evgeniy Oksentyuk replied for Flint.

Jackson Doherty’s first goal as a member of the IceDogs at the 8:15 mark of the third period tied the game at 2-2.

“I thought we played and competed well,” Burke said. “After being down 2-0 early we stuck together and never stopped working and were able to tie it in the third. We out-shot and out-chanced them but just weren’t able to get over the hump.”

In the shootout, Kyen Sopa scored for the IceDogs while Akil Thomas and Philip Tomasino were stopped.

Tynan made 32 saves for Niagara.

The IceDogs are home to Saginaw Thursday and Kingston Friday. 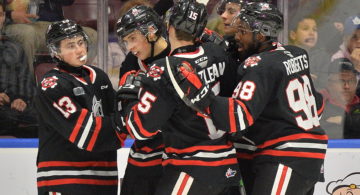