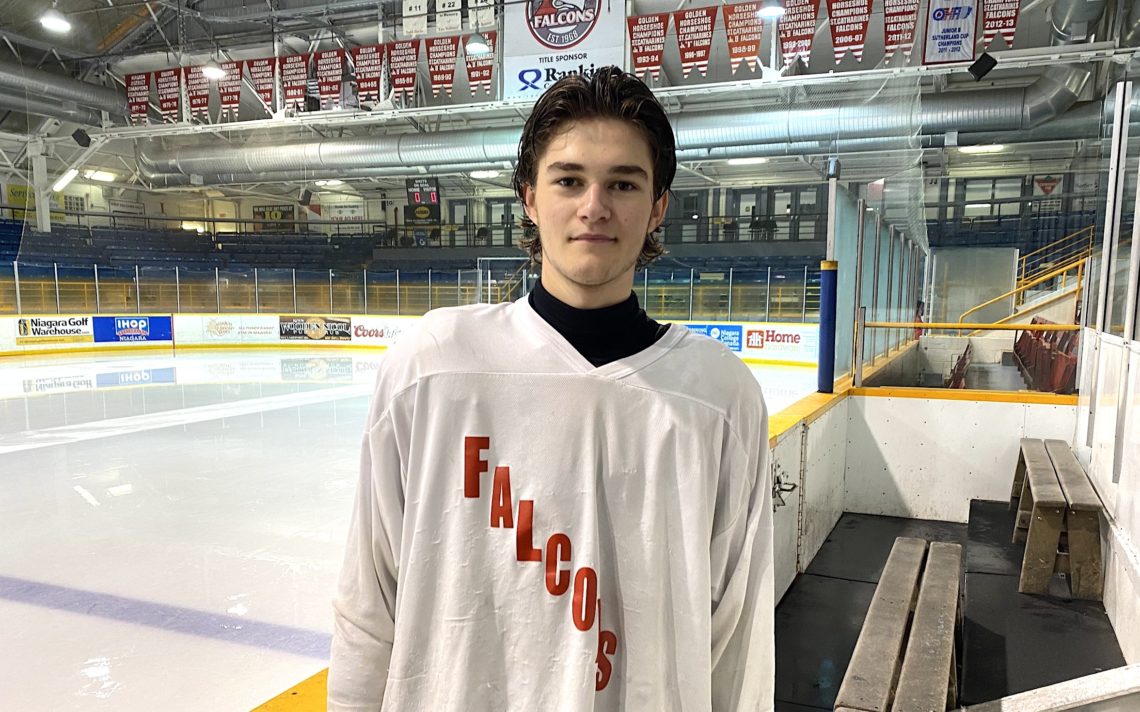 Cameron Lowe has made a quick and smooth transition to junior hockey.

The 16-year-old Niagara Falls native hasn’t looked out of place at all in a handful of scrimmages versus the Niagara Falls Canucks, scoring once and showing he can more than handle the pace.

“It’s gone pretty well. It’s good for me to gain some confidence being out with the older guys,” Lowe said. “It’s a bit of an adjustment going into the corners but it’s just being aware of body positioning and stuff.”

Falcons head coach Tyler Bielby said Lowe’s transition to junior has been made easier thanks to his hockey smarts.

“His hockey IQ. His attention to detail. It’s those little things why scouts noticed him,” Bielby said. “He’s got good poise with the puck and he doesn’t panic with the puck. That tells a lot for a young player, especially when you have guys bearing down on you at the next level.”

“The way he brings himself to the rink, he comes to compete and he comes to learn and treats his teammates with respect and he’s been great with the coaches,” Bielby said. “As a result, I’ll give him nothing but my time to get him where we want to get to.

“If he just keeps working the way he has been, he’ll get there.”

The Erie Otters selected Lowe in the seventh round (128th overall) of the Ontario Hockey League draft earlier this year. He joined the Falcons on the recommendation of Otters player development co-ordinator Ryan Berard.

“I talked to Berard where I should go and talked to him about coming here and he said it was a good idea,” Lowe said. “I feel it’s the best place to come to help me make the jump to the OHL.”

Bielby feels Lowe projects to be a complete player at the OHL level.

“I think if he keeps working, he’s going to be a 200-foot player and be somebody Erie is lucky to have,” he said. “We’ve seen some offensive upside so you know he’s got that in him. To watch him support the puck and play well in his own zone, I think he’s got a bright future.”

“My dad helped me a lot with my smarts. I’ve always been around the game,” he said.

Bielby feels scrimmaging with the Falcons while the COVID pandemic plays itself out is a blessing in disguise for some of the younger players.

“As much as this (COVID) is creating some problems, there are some young guys who are getting an opportunity to build some confidence and not worry about getting run over by a 20-year-old,” he said. “I do think it’s valuable to get comfortable with the puck on their stick and get some confidence.”

The Falcons and Canucks scrimmaged twice over the weekend. The Canucks took a 3-0 decision Friday in St. Catharines before the Falcons won 5-2 Sunday afternoon at the Gale Centre.

“It was another good weekend of hockey,” Bielby said.  “The players had good energy. You can see how much the players are enjoying the opportunity to compete.

“As coaches we were able to see a lot of good things and are excited to keep working. With a lot of young players in our room, there is no lack of energy and as a result they have been able to find some success early in their first junior-type game experience. What we need to focus on and can’t lose sight of is the little things and the adjustments they have to make at the next level.”