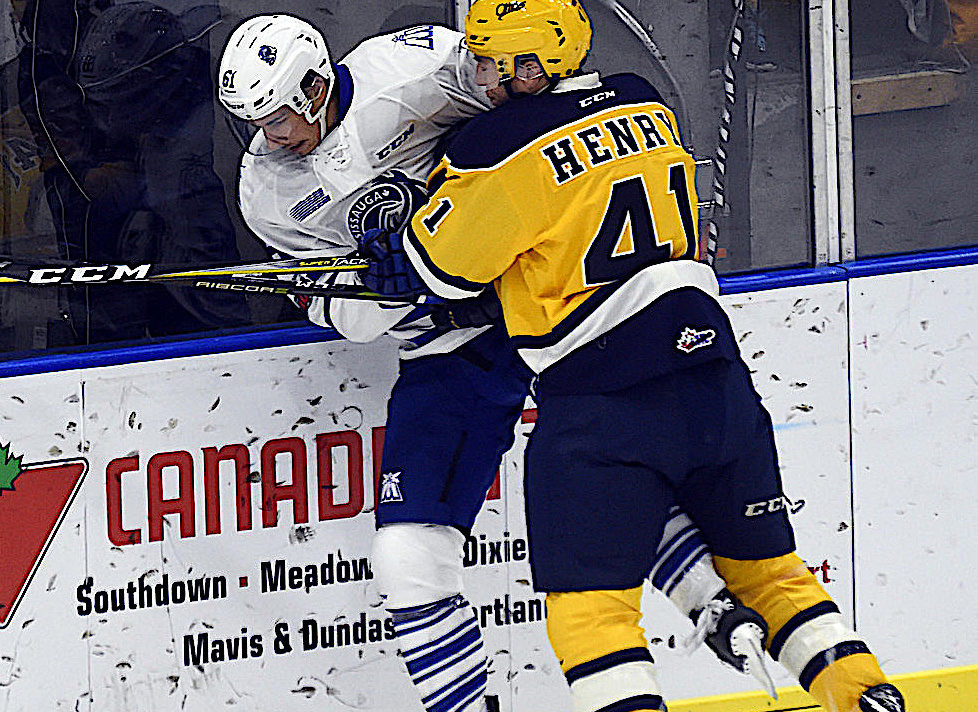 Kurtis Henry has come a long way in half a season with the Erie Otters.

The former Niagara Falls Canucks defenceman has worked his way into a meaningful role with the Otters in his first season in the Ontario Hockey League.

“At the start of the year, it was just trying to survive and not get scored on,” Henry said recently while back in Niagara for the Christmas break. “As the year goes on, I’m trying to make a bigger difference, lay some good hits, stop guys quick, and make nice plays and get myself noticed.”

Henry’s play hasn’t gone unnoticed by Otters’ assistant coach Wes Wolfe who, like Henry, is a native of Niagara Falls.

“Kurtis has done a tremendous job adapting to the OHL game,” said Wolfe, who is his second season with the Otters. “He makes a solid first pass and uses his size well to defend. He has shown a fearlessness in his game (including a couple of fights in both the pre season and regular season) and brings a physical edge that some of our other players may not have.

“With there being eight defencemen on our roster, he has had to sit out some games, but went a good stretch playing every game because he earned it.”

Like most rookies, Henry has had his share of adjustments on and off the ice at the OHL level.

“The main thing is the speed. It’s a lot faster and the guys are all strong. They all work out a lot,” he said.

Off the ice, the travel has been a big eye-opener.

“That’s been a huge adjustment because the travel playing for the Canucks is just a quick, 20-minute drive. Now you’re away for a week at a time travelling five or six or even 10 hours for games. It takes a toll on your body for sure.

“You have to make sure you’re eating right and when you have your down time make sure you take your naps and get good sleeps. You can’t be up late playing video games.”

Henry has come to the realization there are no days off at the OHL level.

“I think the biggest adjustment for him has been having to compete every single day in practice – both physically and mentally,” Wolfe said. “That being said, he came into our dressing room and immediately became a character that guys like to be around. His positive attitude is infectious and his ability to laugh at even himself has been a real asset for us.”

Henry, who has an assist in 18 games with the Otters, can’t say enough about the OHL experience.

Wolfe feels Henry is on the path to a solid OHL career.

“As Kurtis’ skating continues to improve, he has the ability to become a steady defenceman who plays important minutes in the coming seasons,” he said. “For now, we’re really looking for Kurtis to keep learning from our older players and use his time off the ice and in the gym to get stronger so he is ready for when his role increases.”

Henry, who was drafted by the Otters in the ninth round of the 2016 OHL Priority Selection, feels a season of junior B with the Canucks aided his development.

“It was really good to come here for a year,” he said before taking a spin on the ice with his former Canuck teammates. “It helped get my confidence up, that was one of the main things. Just getting used to the bigger, older and stronger guys. You have to get your confidence up or you’ll get killed when you go to the O.”

Canucks coach Frank Pietrangelo is gratified to see one of his players move up.

“We’re very proud of him,” Pietrangelo said. “Would we have loved him to come back? Of course. You always want good players back but it was the next step in his progression.”

“What makes me even more proud is the kids come home on breaks or at Christmas and ask to come and skate and come see the boys in the dressing room. That’s what makes me more proud than anything else. It tells me they enjoyed their time here.”