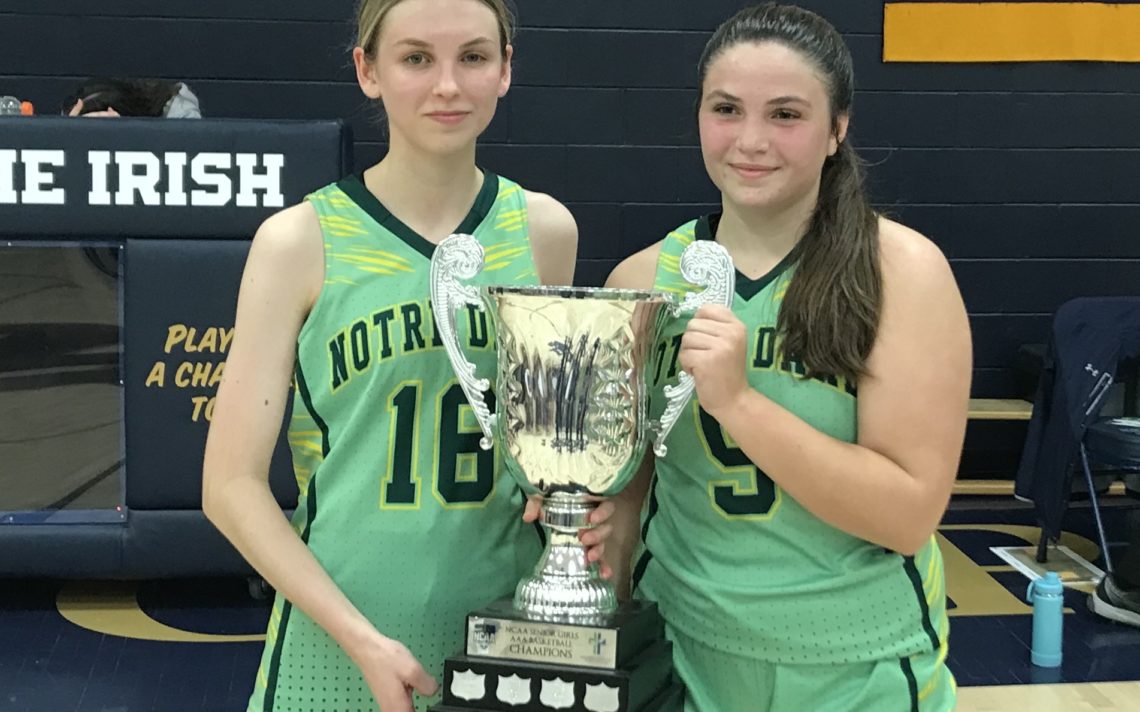 Hemphill gets Irish over the hump

Hemphill, who finished with 31 points to help offset the 37 points poured in by the Thunder’s Maggie Vukojev, went 3-4 from line to help the Irish grab a 69-68 advantage and then hit a pair of free throws with 6.5 seconds left in the game to close out the scoring. She finished 10-12 from the charity stripe.

For the 17-year-old, free throw shooting is one of her specialities.

“I have been playing basketball for a long time. When I was in Welland we were always in the gym shooting free throws and even now with Niagara Juel, after almost every drill we go to the line and shoot free throws. I think it comes from that.”

The more pressure involved with making the free throws the better it is for Hemphill.

“I like the pressure,” she said. “I like to prove people wrong when the crowd is cheering and trying to go against you. I like being able to make them.”

Hemphill moved to Notre Dame from Holy Cross after the last basketball season when her family moved to Welland.

She quickly found a new home with the Irish basketball program.

“We have a really, really great group of girls. We all work together really well, we get along, we play hard and I couldn’t ask for a better team.”

Notre Dame coach Pat O’Leary is happy to have her on his squad.

“She can really shoot, especially in this gym. I find at home she is spot-on accurate and we are really lucky that we got her this year. She has been a huge asset to the team.”

With a roster of only three Grade 12s, Hemphill is an important veteran presence for the Irish.

“She is huge,” O’Leary said. “I think our best athletes might be in Grade 9 but they are young and haven’t played in a lot of big games. It’s stressful. They have a lot of peers out here watching. It is really nice to have Nicole (Pullar) and Emma calming things down.”

The Irish looked in complete control of the game with a 59-45 lead heading into the final quarter but the Thunder never quit.

“I think we were expecting to keep our lead but it didn’t go that way but we fought hard to the end and that’s what we do,” Hemphill said. “We have been in a couple of tough games so we know how to do that.

O’Leary credited the Thunder for playing a great game.

“They came here at the start of the season and we got out to a big lead and they clawed back and we only won by five,” he said. “Again we got out to a bit of a lead but we could not stop 23 (Vukojev). She was unstoppable and she almost got them to the finish line.”

The game was a continuation of a run of fine play by the Thunder to end its season.

“We have finished strong and our last three games have all been very good,” BT coach Gabe Diadamo said. “They really worked hard and they found a groove on defence which was the big thing. We figured out a good press that was helping us with our pressure defence and we didn’t let teams get in their offensive rhythm as readily as we did in the first half of the season.”

Diadamo described Vukojev as his go-to player but pointed out she had plenty of help.

“Thank God for her scoring but what the other four did on defence allowed her to be able to get to the bucket. I have to give them all credit. They played unbelievable.”

He is looking forward to what lies ahead for his squad.