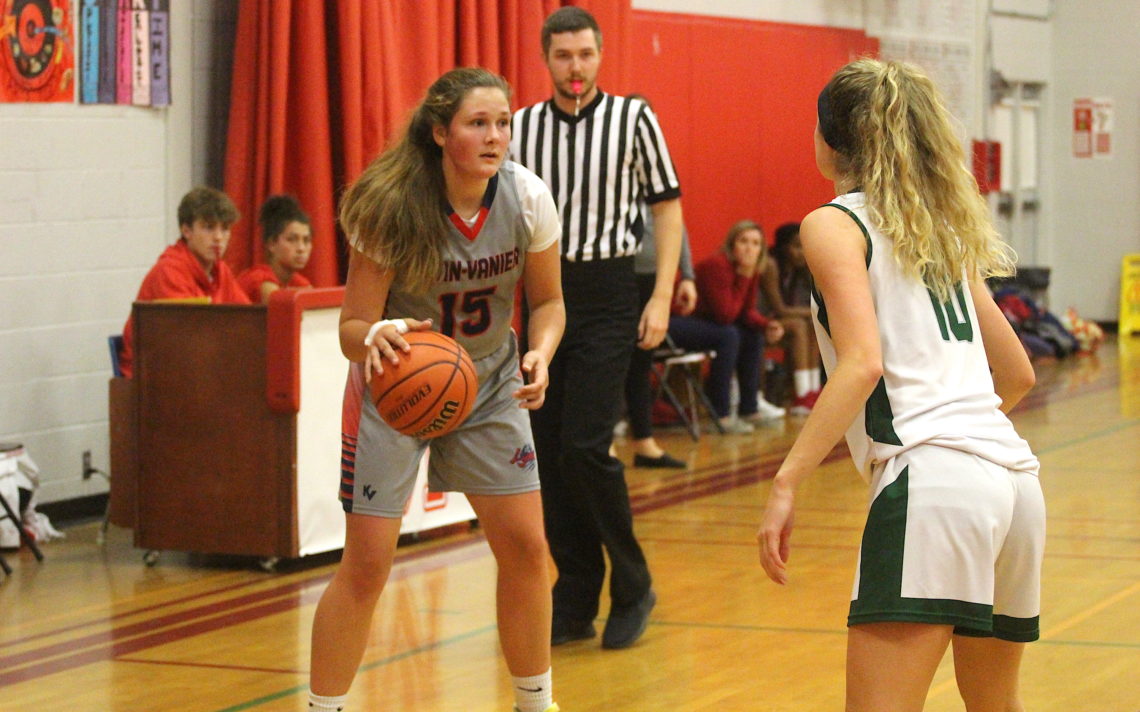 The Jean Vanier Lynx senior girls basketball team is delighted to have Andrea Hebert back on its roster.

“I am happier where I am now and it just wasn’t the right environment for me. My overall happiness is better when I am at my own school.”

The 16-year-old has made an immediate impact on the Lynx’s lineup and she was at it again Tuesday in the opening game of the First BPSN Girls Basketball Tournament. Hebert scored 15 points is a 53-30 victory over the Holy Cross Raiders.

“It is great to have her back and it has allowed Isabelle (Sinclair) and Corrynn (Parker) to play their natural positions,” Vanier head coach Tara Poulin said. “Any team is going to want a six-foot point guard and she has been heavily scouted for that.”

“She will probably be the top point guard to come out of her graduating class and I have high hopes for her,” she said. “She will be playing club for me too and it will be nice to have her all year long.”

For the Niagara Girls Basketball Academy JUEL player, she felt back at home immediately at Jean Vanier.

“I felt kind of relieved to be back at my home school.”

She has high hopes for the season.

“I am hoping to improve, work hard and hopefully have a good season with this high school team and JUEL,” Hebert said. “I want to become stronger as a ball handler and being more comfortable taking more shots and looking at myself as an option.”

Playing with a young team. Hebert knows she has to be a leader.

“They listen and take direction really well so it’s not really that hard.”

She missed playing in The Standard tournament last year and is glad to be competing in the BPSN event.

“It’s nice to play against schools who are from around here and playing with people I have played with in the past,” she said. “And it’s local so people can come and support us.”

Poulin was not happy with her team’s performance Tuesday.

“We did not play up to our potential,” she said. “We missed a lot of easy buckets and our defence wasn’t what it needs to be. If we want to make it to Thursday or Friday, our defence has to be way less lazy.”

That being said, doing that in the first game while still winning is better than falling short later in the tournament.

“We are short a starter who is at the hospital so the other girls have to pick her up,” Poulin said. “If you notice our roster, I have three Grade 9s and three Grade 10s and they are picking up the slack for a few girls who didn’t come out this year who were starters last year.”

Holy Cross hung tough for a section of the first half before the Lynx pulled away.

“I think we battled hard and we always have tons and tons of effort,” Holy Cross head coach Erin Gauthier said. “We never give up and we play right to the last buzzer.”

As usual, Holy Cross played with a short bench.

“We struggled with the bench and we get in foul trouble sometimes because we are playing so strong and so hard,” Gauthier said. “But we do what we can and the girls leave it all on the floor and I am happy to see that.”

Megan Louws netted a dozen points as the Greater Fort Erie Gryphons defeated the A.N. Myer Marauders 41-31 Tuesday to advance to the quarter-finals of the First BPSN Girls Basketball Tournament. 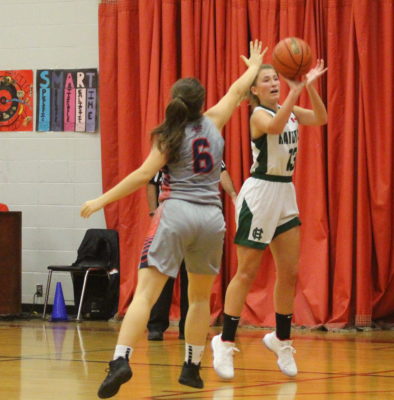