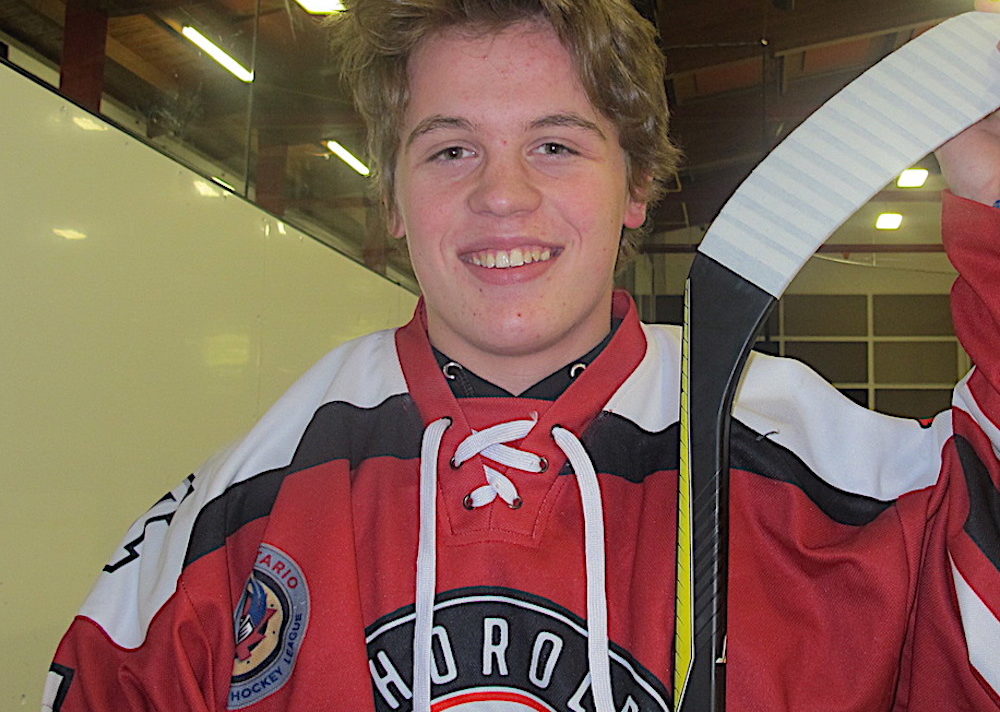 The Ontario Hockey League’s loss was the Thorold Blackhawks’ gain.

Devon Thibodeau was bypassed in last summer’s Ontario Hockey League draft and ended up in Thorold where he has quickly impressed and become one of the Blackhawks most promising defencemen.

“The draft was a tough one,” the 16-year-old Pelham resident said. “I went through it and didn’t get drafted, but it made me want to push myself even harder and show people I’m supposed to be here and supposed to play at this level.

“I can play with the big boys. It’s a challenge but I can do it.”

Thorold coach/owner Scott Barnes was familiar with Thibodeau before he even signed him.

“I’ve known him for awhile from my hockey camps and for three or four years from spring and summer skates,” Barnes said. “He’s a kid who I’ve always had my eye on.”

Thibodeau, who had 21 points in 35 games for the Southern Tier Admirals at the minor midget level last season, is on a similar pace this year with three goals and 16 points so far.

“If you look at the minutes he plays and the role he has on our team, you wouldn’t know he is a 16-year-old,” Barnes said. “He and Mason Howard, two 16-year-olds, are on the power play and penalty kills and they’re logging a lot of minutes. For their development, it’s really good.

“He’s a kid who was undrafted so it’s kind of nice. He’s making a name for himself.”

Barnes has a long list when asked what he likes about Thibodeau’s game.

“His best assets are his skating and high IQ. He’s a really smart player and makes good decisions. He moves the puck well and has good offensive tools and his compete level. He battles and plays much bigger than he is. He’s a smaller defenceman but he plays like he’s a big man. He plays hard and aggressive. He’s a really good 16-year-old defenceman who has a ton of talent and potential.”

Thibodeau has been happy with his progress.

“It was big jump. At the start of the year when I came in I didn’t know if I could make the jump size-wise and if I could play with the bigger guys, but as I played more and more, it’s been awesome. The guys on the team have helped me out a lot.”

Thibodeau appreciates how he has been allowed to develop.

Barnes feels Thibodeau can become more of an offensive force.

“The way he has played over the last couple of years, the emphasis was moving the puck to the forwards and being a defenceman and not really going,” said Barnes, who was quick to give credit to former Hawk defenceman James Guest for Thibodeau’s maturation. “We let him ease his way into it but for the past month now, we’re really stressing him to go and activate and be part of the offence.

“I think for him a lot of it was just a comfort level of just doing his job and now he realizes he’s good enough to be a real solid D in this league.”

Thibodeau, who is maintaining a 90-plus average in Grade 11 at E.L. Crossley, has hopes he can continue up the hockey ladder.

“I’d love to go somewhere. That’s the dream. I’ve love to go as far as I can and keep on progressing and see how far I can take myself.”

The Hawks defeated the Welland Junior Canadians 4-1 Thursday at Thorold Arena to improve to 18-17-3-3. They hit the .500 mark for the first time this season earlier in the week with a 5-0 win at Buffalo.

“We talked about it (.500) after the win,” Barnes said. “We were pretty happy we got to that point. It’s the first time for us all year. For us to get there at the 40-game mark with as young a team as we have and basically starting fresh with the team, we’re pretty excited.

“For us, it was an accomplishment to get there and hopefully we can keep it going.”

Camilo Rodrigue-Melo had two goals for the Hawks while Jacob Mastrangelo and Brendan Charlton added singles.