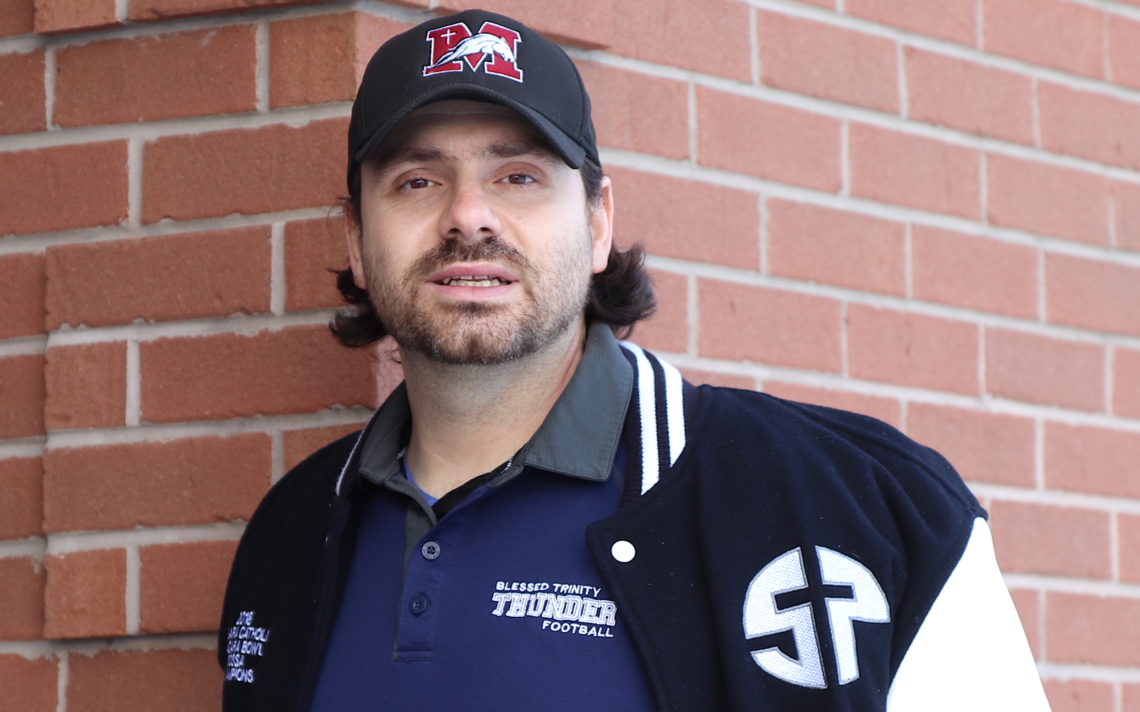 If anyone could be excused for having divided loyalties on Niagara Catholic Athletic Association football fields, it would be Mark Antonelli.

“When I left BT (for the second time), that was a very tough day for me because I felt we had a good chance that year to win the whole thing,” the Niagara Falls resident said. “It was rough because the next day I went to Saint Paul and I am helping Rick and there’s only 10 kids out. I was thinking what did I get into but that season ended up turning out to be quite magical.”

The Patriots would end up winning the Southern Ontario Secondary Schools Association Bowl and making it all the way to an Ontario Federation of School Athletic Associations’ bowl game.

“Then I left next year for Saint Mike’s and that hurt too.”

Antonelli knows younger teachers bounce a round early in their careers before they find a home but with each change and moment of disappointment, there was a chance to interact and bond with a whole different group of athletes and coaches.

“I got to meet so many different players and coaches from all different parts of the region,” he said. “I saw that there is a lot of talent here and a lot of great kids all over this region.”

He has arrived at the point where he views his nomadic existence as a positive.

“I’ve gotten to know almost every kid in this region without having to coach them all at once,” Antonelli said. “After every high school game when I am shaking hands, I have kids from other teams hugging me, congratulating me, crying with me, sharing moments with me and me sharing moments with them just because we have been through those moments together.

Antonelli, who has also coached basketball and track and field, describes his coaching career as a labour of love.

“I want to see kids succeed, especially with football,” he said. “Football was a sport that I felt into in high school.”

He got cut from the Bishop Redding volleyball team in Grade 9 and tried out for the football team.

“They were taking everybody and that’s why I love football,” he said. “It is the one sport where some kids who just can’t find their way, can find it and find something to do. There is no better sport to bring everybody together and allow all the kids to work together and build friendships.

“I do it because I see the joy in the kids when they succeed.”

He feels it is important for teachers to coach because that is part of the calling.

“It doesn’t even have to be sports. It’s just to get involved and be a part of a child’s life outside of the four walls of the school. It is critical in the development of a student.”

He is confident about the future of high school sports.

“The state of high schools sports no matter what school you are at is based on the attitude that you bring to it,” Antonelli said. “If you put together a good program, have a positive attitude and make it inviting for them, the kids are going to want to play.”

With the pandemic halting high school sports in 2020, Antonelli was out of sorts last fall.

“It was the first year in 20 some odd years where I hadn’t been on a football team in the fall as a player or a coach, It was hard and I didn’t know what to do with myself.”

In addition to his football coaching exploits, the former head coach in the Niagara Spears program joined the ranks of the Lakeshore Football Officials Association three years ago.

“It really gave me a new appreciation for the guys that do it. I have worked with a bunch of them and they are really great guys.”

Reffing has helped his coaching career.

“I have been able to see the game better. I see certain situations develop and if I see flags on the field, I already know what they are going to be and I am already moving on to the next play.”

“I enjoyed seeing what he was doing. He was coaching football, lining the fields, all that kind of thing and it came something that I wanted to do. I decided to get into teaching and coaching when I was really young. In university, I was coaching a minor baseball team and a minor football my last couple of years there.”

Antonelli had a five-year post secondary football career at Guelph, going from a walk-on to a starter in the defensive backfield in his third and fourth year. Coach Kyle Walters became another key influence in his life.

“He was my defensive coordinator and really taught me a lot from an Xs and Os perspective. He also had the same mentality as Joe Jurus in the sense that under his tutelage we believed we could win every game even when we were not supposed to. That rubbed off on me and it is what I preach to the players I coach.”

Antonelli graduated from Guelph with a degree in biology and attended teachers college at D’Youville in Buffalo.