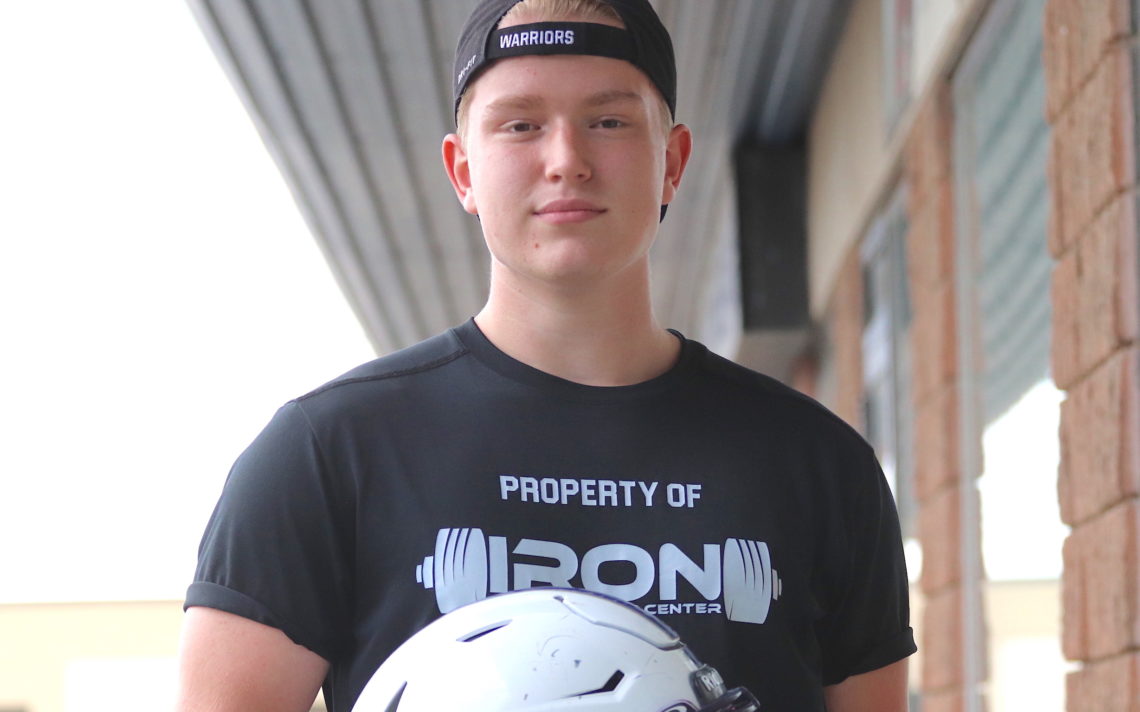 Hard work pays off for Weddell

Cole Weddell was a man on a mission.

“Being a hard worker, he transitioned his body in the last 12 months because he decided he was going to try and be a university player,” A.N. Myer head football coach Dave Buchanan said. “He changed to linebacker, put 40 pounds on, came to Iron Performance and they did a great job here with him. He switched his academics from the applied stream to the academic stream and did well. He worked hard at it which is not easy.”

All of the hard work paid off for the 18-year-old Welland native Wednesday at the Iron Performance Center when he signed on the dotted line to play scholarship football for the Waterloo Warriors. 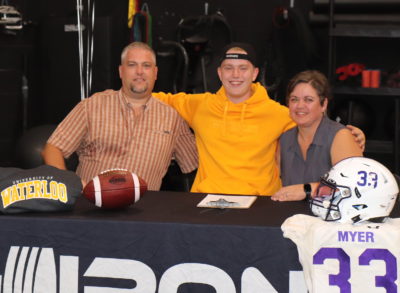 “It just goes to show you that if you want to do it you can and he is just that type of player. He is gritty and he took it upon himself to get someone to teach him how to long snap,” Buchanan said. “That was a critical piece for him because not only can he play linebacker, he can long snap which is pretty valuable. He did what he needed to do and he listened to people to get recruited. Now he is going to a great program.”

“It’s about putting your head down and getting the work done,” he said, “I have stayed at the same weight but I have been able to lose a considerable amount of fat. I have gotten a lot stronger here thanks to the coaches putting me in the right place and in the right programs.”

British Columbia Lions fullback Mario Villamizar also trains at Iron Performance and he has become a mentor to Weddell.

“When I started here, Mario and coach Myles (Methner) were very supportive and gave me the tools to become a better linebacker and a better leader in general. They helped me focus on academics and come to the gym more.”

“It is higher level stuff that you wouldn’t be able to get in high school and it helps me increase my knowledge as a linebacker.”

Methner has been working with Weddell for 10 months and has seen tons of improvement.

“His whole mindset towards training has changed and I think he has realized the value of it and how it is going to help him at the next level,” said the former Laurier football player. “His strength, size, power and speed have all increased and people who haven’t see him in a while are quick to make those comments.” 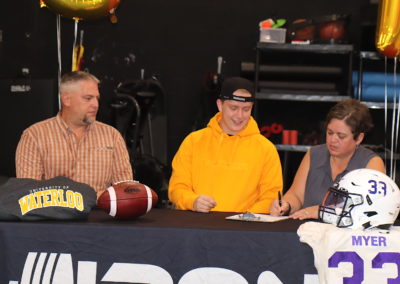 Methner had a specific target for Weddell.

“Our goal for him is to be one of the most ready players in his recruiting class at Waterloo. It is obviously a huge step from high school to university and we are trying to make sure he is ready as he possibly can be.”

Weddell started getting scholarship interest early in his Grade 11 year and by Grade 12, he was speaking to six or seven schools. He realized he had a chance to play at the university level when he converted to being a linebacker from defensive back.

“I really started to see how well I could play at linebacker. I have always been really good at reading the field and the new position gave me the ability to tackle all over the place,” the 6-foot-1, 210-pounder said. “Playing defensive back for six to eight years gave me confidence to be a coverage linebacker in the Canadian game. And with my size, I was already a lot bigger and stronger than most kids.”

He switched positions at the suggestion of Myer defensive coordinator Nico Marino.

“He thought I would go farther as a linebacker than a defensive back and at that point, I said I might as well. I put on 40 pounds of muscle in the offseason.

“It was the academics and the academic support at Waterloo,” he said, adding he plans to get a bachelor of science in kinesiology.

The football team was also a big draw. 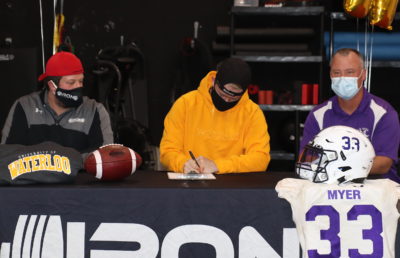 “They are an up-and-coming team, I already know a lot of guys on the team and the coaches really made it feel like home. It was a very welcoming atmosphere.”

Weddell came back to Myer for his 12B year to improve his academic standing and he can’t wait to get started at Waterloo.

“My goal is to play special teams my first year and I want to long snap as well. I want to challenge for that position as soon as I can,” he said. “From there, I want to learn from the older guys on the team and become a better linebacker myself.”

Buchanan would have loved to have seen Weddell play in his 12B season.

“He was ready to take off because he was that much faster and stronger. He was going to have a great season and be one of the leaders on the team.”

Weddell had already shown plenty of leadership at Myer.

“He always takes the younger guys under his wing and encourages them because he remembers what it was like when he was young,” Buchanan said. “I’ve seen his leadership skills improve and Waterloo is getting the whole package.”