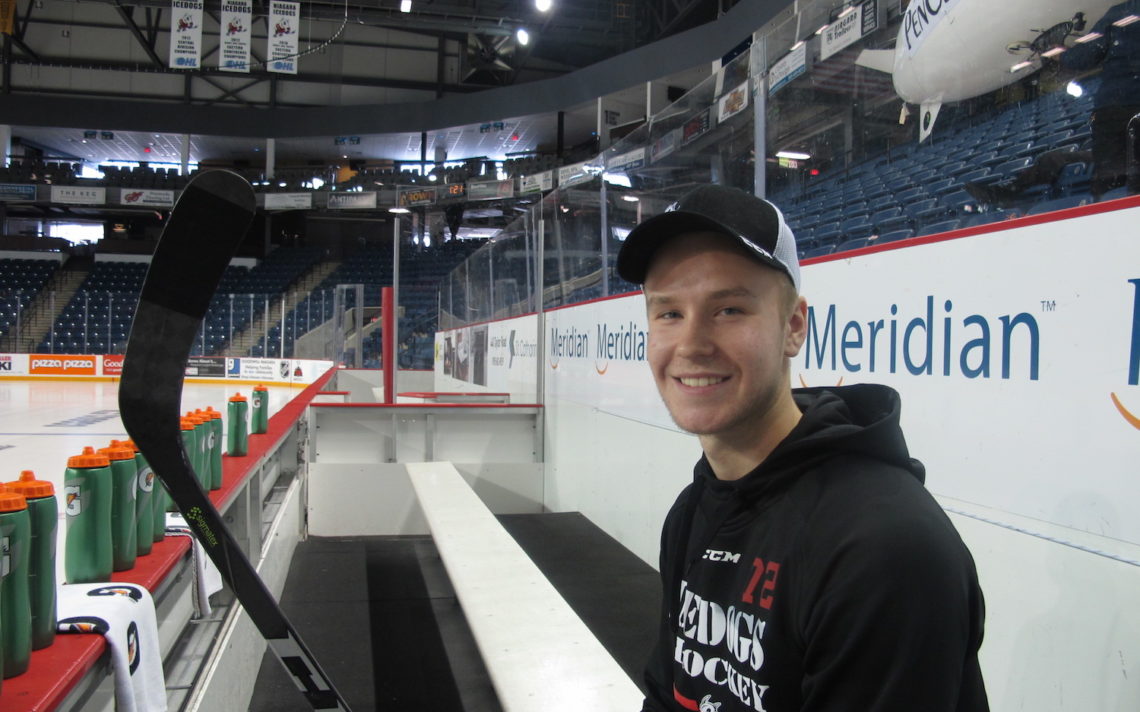 Bradey Johnson wasn’t prepared to take no for an answer in his quest to play in the Ontario Hockey League.

The 18-year-old Linsday native knew it would be a long shot to crack the roster after being selected in the 13th round of the 2015 OHL Priority Draft by the Niagara IceDogs, but realized he had a chance if he worked hard and showed the club he would be willing to accept any role.

So after playing junior B with the Welland Junior Canadians in 2015/16, Johnson came even closer to making the grade last training camp before being sent to the Northern Junior Hockey League where he excelled to the point he was brought back by the IceDogs.

“We had some injuries at Christmas. He came to skate with us and never left,” IceDogs head coach Billy Burke said.

Johnson never gave up the dream.

“Well, it was tough because I was one of the later cuts,” he said. “I made it so far and there was always talk that it wasn’t completely over because they were still very interested in me but it just didn’t work out with where they stood.

“I definitely thought of NCAA but I really wanted to make the OHL since I was a kid and wanted to do everything I could to make it.”

Johnson got into 35 games with the IceDogs last year in a limited role and this season was so impressive he earned a regular spot out of training camp.

“He had a great off season,” Burke said. “He came back to camp in tremendous shape and was one of our better players at camp and had an opportunity to become a regular.”

Johnson’s hard work and determination — Burke says he is the first one on the ice and last one off at practice — have given him an edge.

“It’s obvious at practice. You notice the habits that he’s committed,” Burke said.

Johnson gives credit to his father, John Johnson, for his work ethic. John Johnson had a four-year OHL career with the Windsor Spitfires, Niagara Falls Thunder and Peterborough Petes from 1988-92, amassing 259 career points (121-138–259) over 227 games.

“My dad pushed me to work as hard as I can,” Johnson said.

When he was in Welland and then later with Rayside-Balfour of the NOJHL, Johnson said he often used Vince Dunn as inspiration. Both are from Lindsay and began their careers in junior B.

“He was on the IceDogs so why couldn’t I do it?” Johnson said. “He was great motivation to realize it’s not over and that I could still do it.”

Johnson has excelled as a reliable forward, who has meshed well recently on a line with rookies Phil Tomasino and Andrew Bruder, as well as a solid contributor killing penalties.

“I wouldn’t say it’s easy, but it’s fun. I’m embracing my role,” Johnson said. “It takes a lot of hard work and blocking shots is kind of scary but you have to do it if you want to win. You do anything to win.”

Johnson is well aware it’s essential for a team to feature a mix of forwards.

“It’s really important. It’s a big part of the game. You can’t have a whole team of scorers. You also need guys who can shut down their top lines and not let them capitalize on their power plays.”

“Bradey is a great team guy. It doesn’t matter what line he is on. He can play up or down the lineup and on the penalty kill and if we every needed him on the power play, I’m sure he could do that, too. He’s a great swing guy to have. Can play centre or either wing and not be out of place.”

Johnson has four assists through 11 games and is anxious to get his first OHL goal under his belt.

“I haven’t scored yet and that’s on my mind but I can’t let it bother me and affect my game. I just have to keep working hard,” he said. “It would be the greatest feeling to get that off my back. It’s bugging me but I have to realize I’m doing well in my role defensively and my time will come.”