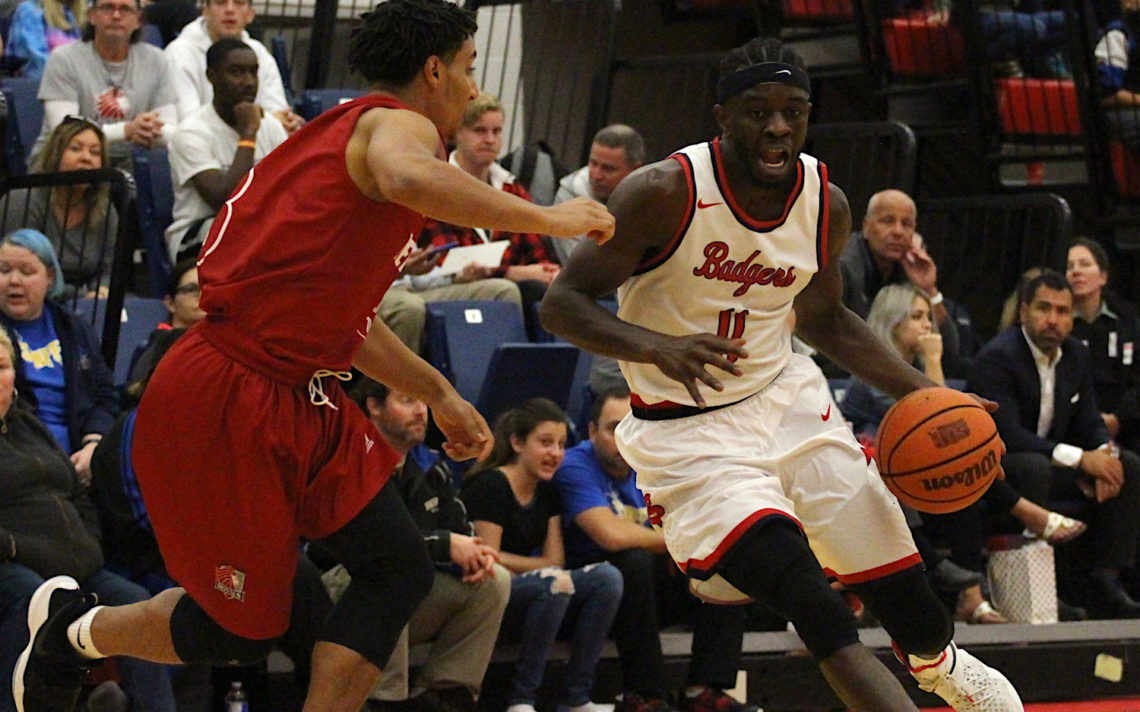 The other half of Brock’s Dynamic Duo

Brock basketball coach describes Johneil Simpson as the most underrated player in the league. Photo by BERNIE PUCHALSKI

He laughs when a reporter refers to Daniel Elgadi and Johneil Simpson as Batman and Robin.

“It’s Batman and Batman,” Kissi said. “They both have the ability to take over games and be impactful.

“I thought Johneil was our best player in the second half of last year and nobody focused on it.”

The 24-year-old Simpson, who scored 16 points in a 107-69 exhibition victory over the Redeemer Royals Thursday, loves the Batman and Batman description.

Despite being the Canadian university rookie of the year in his first season and being a two-time Ontario University Athletics Second Team All-Star, Kissi describes the 6-foot-5 guard as the most underrated player in the league.

“I think some people look at his decision making, but he is one of the most talented scorers in our league,” Kissi said. “He continues to get better and he has been solid.” Simpson continues to quietly climb up the career scoring list at Brock and will finish at or near the top when his career comes to an end next year.

“To me, he is one of the top 10 players in our league, for sure, and one of the best in the country,” Kissi said.

Simpson tosses the most underrated label right back at his coach.

“As great as he is, a lot of players and coaches around the league don’t really see how good he is and how far he has brought the program.”

Simpson’s development, especially with his discipline and focus, has helped Brock move forward.

“He had done a good job of improving his defence every year and I demand that of our guys,” Kissi said. “His shot and his passing have become significantly better. Every year the kid has worked to improve and he is a staple of this program. No Johneil, no success.”

The Toronto native credits the floor time he received at Brock in his rookie season for developing his skills.

“In a sense, I was thrown into the fire and got a lot of minutes, but looking back on it, it was a great opportunity that not a lot of players get,” the media and communications student said. “I embraced it and when I look back on it, it definitely made me the player I am today.” He has certainly picked it up at the defensive end.

“I was a subpar defender when I got here but I’ve taken strides and gotten better,” he said. “Offensively, I’m better with my shot selection and knowing when to move the ball and when to shoot it.”

Simpson has done whatever Kissi has asked of him, including coming off the bench last season for Brock.

“A guy who could start on any team in the country and he went to the bench,” Kissi said. “He took a role as the sixth man as was, by far, our best player.”

Simpson can’t comprehend how fast his time at Brock has gone.

“It is unbelievable,” he said. “It feels like I just got here yesterday and it has been amazing to see the program grow and change. It is a blessing to still be here.”

Simpson and his teammates have set the highest standard for this season.

“We are all in,” he said. “Anything short of a championship is a failure for us this year. We are taking it day by day and game by game, but that is our goal.”

Simpson will continue to work on his game to help the Badgers achieve that lofty goal.

“What gets me to the next level is my ability to get my teammates involved and being a better playmaker,” he said.

BPSN Star of the Game: Brock’s Ryan Cassidy with 24 points.